About Image
The Outer Space Treaty, signed in 1967, stipulates that every effort must be made to protect other worlds from contamination by missions like the Curiosity rover.NASA/JPL–Caltech/MSSS
Aug. 13, 2018
Research Highlight

Putting the Ethics into Planetary Protection

In the coming decades, as we gear up for a more in-depth search for life on Mars, as well as visits to potentially habitable ocean moons in the outer Solar System, should scientists start addressing the ethical concerns of accidentally contaminating these worlds with Earthly microbes, as well as the scientific implications? That’s the question posed by a trio of scientists who are arguing for a shake-up in how we think about planetary protection.

If there is life on Mars, or in the waters of Europa or Enceladus, then we risk contaminating it with terrestrial microbes before we can even get the chance to discover that life. Despite our best efforts, no mission goes into space completely sterile, but there are requirements: the Outer Space Treaty, which was signed by all space-faring nations in 1967, stipulates that every effort must be made to protect other worlds from contamination. The Committee on Space Research (COSPAR) has guidelines that state that any mission designed to look for life on other worlds must not have a probability greater than 1-in-10,000 that a single microbe carried on board will contaminate potential extraterrestrial habitats.

The requirement is dictated by the need to ensure the scientific integrity of the discovery of life. How could we be sure we have found life native to another world if we have already contaminated it with Earthly microbes? There is, however, another aspect to planetary protection that tends to be overlooked, which is that the potential alteration of alien biospheres in the face of invasive terrestrial microbes is also an ethical issue.

Currently, the only potentially life-bearing world that could have been contaminated by microbes hitchhiking on a spacecraft is Mars. In 2012, researchers catalogued 298 strains of extreme bacteria that were able to survive the sterilization process in European Space Agency clean rooms, and it is expected that there are dormant terrestrial microbes on Mars today, although it is not suspected that any active contamination has yet taken place.

However, that could change if humans land there, or if we send spacecraft to venture into the oceans of the icy moons of the outer Solar System.

Therefore, it’s time to reopen the debate about the risks of ‘forward contamination’ and its ethical implications, say Brent Sherwood and Adrian Ponce of the Jet Propulsion Laboratory (JPL), and Michael Waltemathe of Ruhr-Universität Bochum in Germany.

“What motivated us was what I call the pedigree and the provenance of the 1-in-10,000 number,” says Sherwood, who is Program Manager for Solar System science mission formulation at JPL . “By pedigree I mean, where did it come from, and by provenance I mean, how has it been curated since it was written down? My co-authors and I find it unsatisfying, partly because modern biology is a moving target, and also partly because we are now entering an era where we will be exploring other worlds with vast amounts of water.”

The current forward contamination requirement has a long history. Its story dates back to 1963, when JPL’s Leonard Jaffe first presented the number in a study that was based on two rationales. The first was the likelihood that three-quarters of all life-detecting missions to Mars would fail to return useful data (this was back in the 1960s, when spaceflight was new and mission failures were common), and the second was that the chance of contaminating Mars with robotic spacecraft is much less than if humans landed on the red planet.

Subsequent studies categorized missions by type (are they landers or rovers, and are they designed to detect life?) as well as by a mission’s target (is the spacecraft going to a possibly life-bearing world such as Mars or Europa, or a dead world like Mercury?). These subsequent studies typically still conclude that a probability of 1-in-10,000 is the most reasonable requirement. Yet the more we learn about the potential for life not only on Mars but also the ocean moons of the outer Solar System, and the more we discover about extremophile survivability and microbial interdependences – with the former arguing for a more stringent requirement and the latter for a more lax requirement, says Sherwood – the more these studies look outdated. 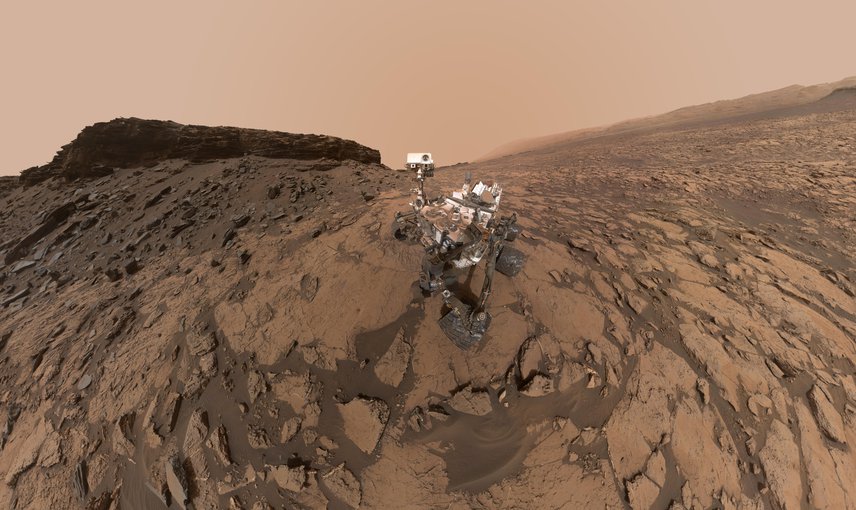 The Outer Space Treaty, signed in 1967, stipulates that every effort must be made to protect other worlds from contamination by missions like the Curiosity rover.Image credit: NASA/JPL–Caltech/MSSS..

“Maybe there is life out there, but can we learn about it without damaging it, and is it up to us to protect it? What obligations are we under?” asks Sherwood. “The entire history of the discussion of the forward contamination requirement has been motivated only by protecting our ability to do science in the future. What it’s missing is a discussion about protecting the biosphere of another world because it may not be ours to mess up, which is the ethical argument.”

In their paper, the scientists cite two examples where scientific endeavors with societal and ethical consequences had risk assessments taken and a decision made as to whether to proceed. The first was the scientific debate over the test of the first thermonuclear bomb in 1952. One concern at the time was that the explosion might ignite a chain reaction in our atmosphere, incinerating it and all life on the planet. Because of the classified nature of nuclear weapons development, these deliberations took place in secret and the decision was never placed in the wider world’s hands.

In each case, the solution was decided by means that Sherwood would like to avoid – in secret or in a court of law. There is a case to argue that scientific dilemmas with ethical implications should be open for the whole world to debate, just like how discussions over the use of genetically modified foods or artificial intelligence have been placed on the global stage. Furthermore, Sherwood and his co-authors are calling on not just scientists, but also the public and non-technical experts, to discuss the risks of contaminating another world with terrestrial microbes and determine what an acceptable way of managing those risks would be.

“The discussion needs to include people who are not technical, it needs to be open and it needs to be ongoing, because there is no such thing as a final answer to any of this,” says Sherwood. By that, Sherwood is referring to how our understanding of biology, and astrobiology is growing so rapidly that it is beginning to outpace the evolution of our planetary protection policies. Given the length of time it takes to propose, plan and launch a planetary mission, the astrobiological sands could very well have shifted in the decade or so between planning and building a spacecraft, and launching and conducting its mission.

“Part of our motivation is the fear – that’s a strong word, sorry – that having this conversation downstream would be more painful and expensive than having it upstream,” Sherwood tells Astrobiology Magazine. “Because these are multi-decade endeavors in planetary science, the people who make the policy decisions today won’t even be around when the missions occur, but the people who will inherit the societal consequences and on whose conscience it will weigh if we stumble or make a mistake aren’t even at the table yet. Who speaks for them?”

Despite the National Academies report, Sherwood already has a mechanism in mind for tackling the ethical considerations before they become a more serious concern. He sees two stages, with the first stage being to get the problem out into the open and communicate to the world what can be done, how the risks could be managed, what our limitations are and what the 1-in-10,000 number means. This would help provide context for the global discussion to then move to the second stage, which is deciding from the options available what should be done.

A future Europa lander would contain a subsystem that would incinerate the inside of the spacecraft once its mission has ended, sterilizing the lander’s interior.Image credit: NASA/JPL–Caltech.

Communicating those options correctly is still a problem, says Sherwood, who highlights one particular feature in a concept for a spacecraft that could one day land on the icy wastes of Jupiter’s moon Europa, which hosts a global ocean somewhere below the ice. Over aeons, Europa is resurfaced and eventually, as part of this resurfacing process that sees the gradual churning of surface ice, any lander would find itself subsumed by the ice and gradually work its way down towards the ocean, where there could potentially be life.

“There would be a subsystem inside the spacecraft that, when the mission is over, will incinerate the innards, which are the parts of the spacecraft that we would be unable to be sterilize before launch,” Sherwood tells Astrobiology Magazine. “It’s a very subtle, sophisticated response to the forward contamination requirement, yet it is not clear how widespread the understanding of this approach even is yet. It starts with communication.”

Given that ethical values can vary from organization to organization in the same country, never mind from country to country, there is the potential for such discussion to involve heated debate, with clashes of viewpoints. Ultimately, some people could be left disappointed by the conclusion reached by the majority, but one area that remains unclear is who ultimately makes that final decision based on the arguments presented as part of the debate.

“I don’t have an answer to that!” he admits. “Going back to the precedent of the particle accelerators, the decisions were relegated by the courts to the jurisdictions in which the facilities were built.”

The organization that has the ultimate say over space launches is the launching authority in a given country, per the Outer Space Treaty. The launching authority has responsibility for ensuring that the launch is safe, is not carrying any toxic materials that could harm life on Earth in the event of a launch failure, and is not a danger to other satellites and spacecraft already in orbit. In the United States, says Sherwood, the Federal Aviation Administration (FAA) has ultimate control over what launches and what doesn’t, but the FAA does not have the personnel to assess the risks for planetary protection.

“How could they make a decision?” asks Sherwood rhetorically. “So, there’s sort of a mechanism in place, but it’s not a complete mechanism. I think all of these issues regarding who gets the final say and how would that happen need to be decided, which again is a good reason to have the discussion. It may be that the rest of the world doesn’t even care if we interfere with an alien ecosystem, but our point is not that people will care, it’s that people might care, and until we ask we won’t know.” 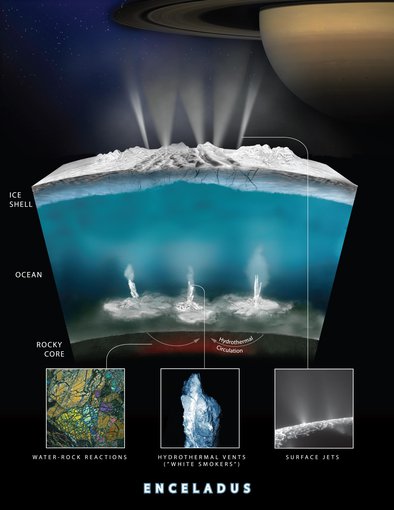 Saturn’s moon Enceladus harbors an ocean that could contain life beneath its icy surface. A future mission to explore this ocean is therefore a serious contamination hazard that could damage any biosphere on Enceladus.Image credit: NASA/JPL–Caltech/SwRI.