Proxima b Is Surely Not “Earth-like.” But It’s a Research Magnet and Just May Be Habitable. 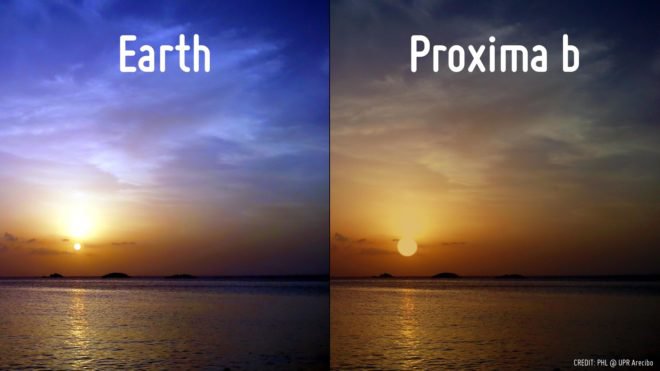 A simulated comparison of a sunset on Earth and Proxima b. The images sets out to show that the red-dwarf star Proxima Centauri appears almost three times bigger than our sun in a redder and darker sky. There is value in illustrating how conditions in different solar systems would change physical conditions on the planets, but there is a real danger that the message conveyed becomes the similarities between planets such as Earth and Proxima b. At this point, there is no evidence that Proxima b is “Earth-like” at all. The original photo of the beach was taken at Playa Puerto Nuevo in Vega Baja, Puerto Rico. (PHL @ UPR Arecibo)

It is often discussed within the community of exoplanet scientists that a danger lies in the description of intriguing exoplanets as “Earth-like.”

Nothing discovered so far warrants the designation, which is pretty nebulous anyway. Size and the planet’s distance from a host star are usually what earn it the title “Earth-like,” with its inescapable expectation of inherent habitability. But residing in a habitable zone is just the beginning; factors ranging from the make-up of the planet’s host star to the presence and content of an atmosphere and whether it has a magnetic field can be equally important.

The recent announcement of the detection of a planet orbiting Proxima Centauri, the closest star to our own, set off another round of excitement about an “Earth-like” planet. It was generally not scientists who used that phrase — or if they did, it was in the context of certain “Earth-like” conditions. But the term nonetheless became a kind of shorthand for signalling a major discovery that just might some day even yield a finding of extraterrestrial life.

Consider, however, what is actually known about Proxima b:

• The planet, which has a minimum size of 1.3 Earths and a maximum of many Earths, orbits a red dwarf star. These are the most common class of star in the galaxy, and they put out considerably less luminosity than a star like our sun — about one-tenth the power.

• These less powerful red dwarf stars tend to have planets orbiting much closer in than a larger star. Proxima b, for instance, circles the star in 11.3 days.

• A consequence of this proximity is that the planet is undoubtedly tidally locked by the gravitational forces of the star — meaning that the planet does not rotate like Earth does but rather has a daytime and nighttime side like our moon. Some now argue that a tidally locked planet could theoretically be habitable, but the consensus seems to be that it is an obstacle to habitability rather than a benefit.

• The authors of the Proxima b paper make clear that evidence that the planet is rocky (as opposed to gaseous) is limited, and that’s why they label it as a “candidate terrestrial planet.”

So to describe Proxima b as “Earth-like” seems unfortunate to me, and prone to giving the public the misguided impression of a planet with blue skies, oceans, and fish swimming in them. Proxima b may have some very broadly defined characteristics that parallel Earth, but so do many other exoplanets that are definitely not habitable. And therein lies the really interesting part.