About Image
ALMA is a radio astronomy array located in Chile and set 16,000 feet above sea level. It’s a partnership between the European Southern Observatory (ESO), the National Science Foundation (NSF) of the United States and the National Institutes of Natural Sciences (NINS) of Japan in collaboration with the Republic of Chile. ALMA, which began operations in 2013, is used to observe light from space in comparatively long radio wavelengths.ESO/José Francisco Salgado
June 22, 2018
Feature Story

Just as the number of planets discovered outside our solar system is large and growing — more than 3,700 confirmed at last count — so too is the number of ingenious ways to find exoplanets ever on the rise.

The first exoplanets were found by measuring the “wobble” in their host stars caused by the gravitational pull of the planets, then came the transit technique that measured dips in the light from stars as planets passed in front of them, followed by the direct imaging of moving objects deemed to be planets, and numerous more.

A new technique can now be added to the toolkit, one that is useful only in specific galactic circumstances but is nonetheless ingenious and intriguing.

By detecting unusual patterns in the flow of gas within the protoplanetary disk of a young star, two teams of astronomers have confirmed the distinct, telltale hallmarks of newly formed planets orbiting the infant star.

In other words, the astronomers found planets in the process of being formed, circling a star very early in its life cycle.

These results came thanks to the Atacama Large Millimeter/submillimeter Array (ALMA), and are presented in a pair of papers appearing in the Astrophysical Journal Letters.

Richard Teague, an astronomer at the University of Michigan and principal author on one of the papers, said that his team looked at “the localized, small-scale motion of gas in a star’s protoplanetary disk. This entirely new approach could uncover some of the youngest planets in our galaxy, all thanks to the high-resolution images coming from ALMA.” 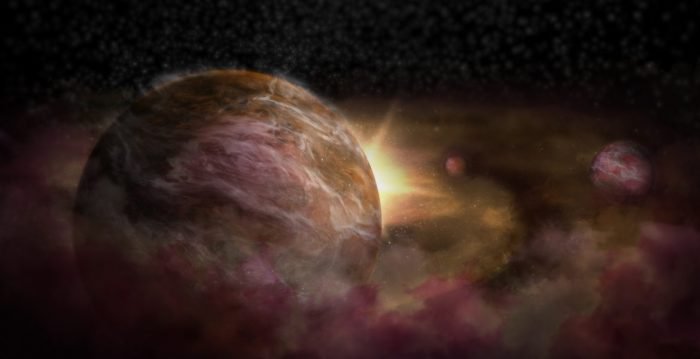 An artist rendering of infant star HD 163296 with three protoplanets forming in its disk The planets were discovered using a new mode of detection — identifying unusual patterns in the flow of gas within a protoplanetary disk.Image credit: NRAO/AUI/NSF; S. Dagnello.

To make their respective discoveries, each team analyzed the data from various ALMA observations of the young star HD 163296, which is about 4 million years old and located about 330 light-years from Earth in the direction of the constellation Sagittarius.

Rather than focusing on the dust within the disk, which was clearly imaged in an earlier ALMA observation, the astronomers instead studied the distribution and motion of carbon monoxide (CO) gas throughout the disk.

As explained in a release from the National Radio Astronomy Observatory, which manages the American operations of the multi-national ALMA, molecules of carbon monoxide naturally emit a very distinctive millimeter-wavelength light that ALMA can observe. Subtle changes in the wavelength of this light due to the Doppler effect provide a glimpse into the motion of the gas in the disk.

If there were no planets, gas would move around a star in a very simple, predictable pattern known as Keplerian rotation.

“It would take a relatively massive object, like a planet, to create localized disturbances in this otherwise orderly motion,” said Christophe Pinte of Monash University in Australia and lead author on the other of the two papers.

And that’s what both teams found. 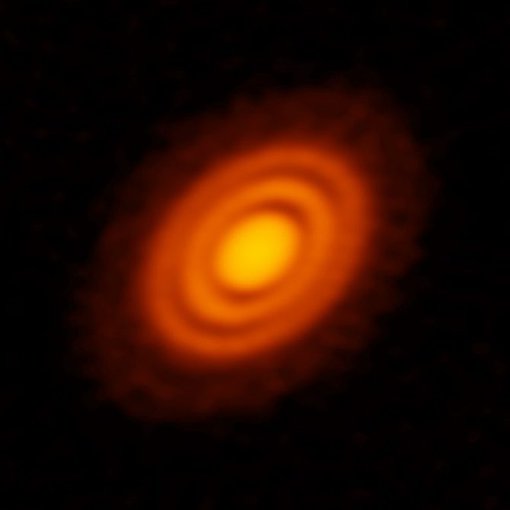 ALMA image of the protoplanetary disk surrounding the young star HD 163296 as seen in dust.Image credit: ALMA: ESO/NAOJ/NRAO; A. Isella; B. Saxton NRAO/AUI/NSF.

That’s because information about the characteristics of very young planets orbiting young stars can potentially add substantially to one of the long-debated questions of planetary science: How exactly did those billions upon billions of planets out there form?

The leading theory of planet formation, the “core accretion model,” has planets forming slowly — with dust, small objects and then planetesimals smashing into a rocky core and leaving matter behind. In this model, the planet building takes place in a region close to the protoplanet’s stars.

Another theory looks to gravitational instabilities in the disk, arguing that giant planets can form quickly and far from their host stars.

The distribution of current solar system planets and beyond can give some clues based on the size, type and distribution of those planets. But planets migrate and evolve, and they have never been studied before they had a chance to do much of either.

The techniques currently used for finding exoplanets in fully formed planetary systems — such as measuring the wobble of a star or how a transiting planet dims starlight — don’t lend themselves to detecting protoplanets.

With this new method for looking into those early protoplanetary disks, the hunt for infant planets becomes possible. And the results in terms of understanding planet formation look to be very promising.

“Though thousands of exoplanets have been discovered in the last few decades, detecting protoplanets is at the frontier of science,” said Pinte.

ALMA is a radio astronomy array located in Chile and set 16,000 feet above sea level. It’s a partnership between the European Southern Observatory (ESO), the National Science Foundation (NSF) of the United States and the National Institutes of Natural Sciences (NINS) of Japan in collaboration with the Republic of Chile. ALMA, which began operations in 2013, is used to observe light from space in comparatively long radio wavelengthsImage credit: ESO/José Francisco Salgado (josefrancisco.org).

This is not the first time that ALMA images of protoplanetary disks have been used to identify what seem to be protoplanets.

In 2016, a team led by Andrea Isella of Rice University reported the possible detection of two planets, each the size of Saturn, orbiting the same star that is the subject of this week’s report, HD 163296.

These possible planets, which are not yet fully formed, revealed themselves by the dual imprint they left in both the dust and the gas portions of the star’s protoplanetary disk.

But at the time that paper was published, in Physical Review Letters, Isella said the team was focused primarily on the dust in the disks and the gaps they created, and as a result they could not be certain that the features they found were created by a protoplanet.

Teague’s team also studied the dust gaps in the disk of HD 163296, and concluded they provided only circumstantial evidence of the presence of protoplanets. What’s more, that kind of detection could not be used to accurately estimate the masses of the planets.

“Since other mechanisms can also produce ringed gaps in a protoplanetary disk,” he said, “it is impossible to say conclusively that planets are there by merely looking at the overall structure of the disk.”

But studying the behavior of the gas allowed for a much greater degree of confidence. 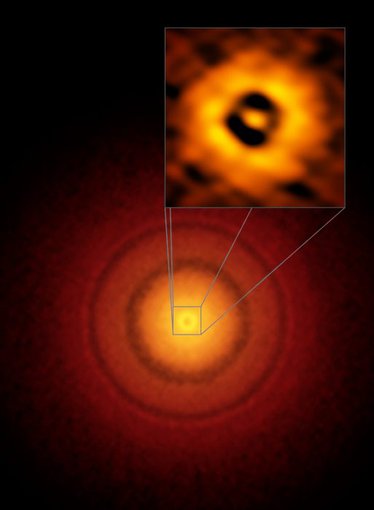 These earlier images from ALMA reveal details in the planet-forming disk around a nearby sun-like star, TW Hydrae, including an intriguing gap at the same distance from the star as the Earth is from the sun. This structure may mean that an infant version of our home planet is beginning to form there, although these dust gaps are considered to be suggestive rather than conclusive.Image credit: S. Andrews; Harvard-Smithsonian CfA, ALMA (ESO/NAOJ/NRAO)}ALMA.

The team led by Teague identified two distinctive planet-like patterns in the disk, one at approximately 80 astronomical units (AU) from the star and the other at 140 AU. (An astronomical unit is the average distance from the Earth to the sun.) The other team, led by Pinte, identified the third at about 260 AU from the star. The astronomers calculate that all three planets are similar in mass to Jupiter.

The two teams used variations on the same technique, which looked at anomalies in the flow of the gas – as seen in the shifting wavelengths of the CO emission — that would indicate it was interacting with a massive object.

Teague and his team measured variations in the gas’s velocity. This revealed the impact of several planets on the gas motion nearer to the star.

Pinte and his team more directly measured the gas’s actual velocity, which is better precise method when studying the outer portion of the disk and can more accurately pinpoint the location of a potential planet.

“Although dust plays an important role in planet formation and provides invaluable information, gas accounts for 99 percent of a protoplanetary disks’ mass,” said coauthor Jaehan Bae of the Carnegie Institute for Science. 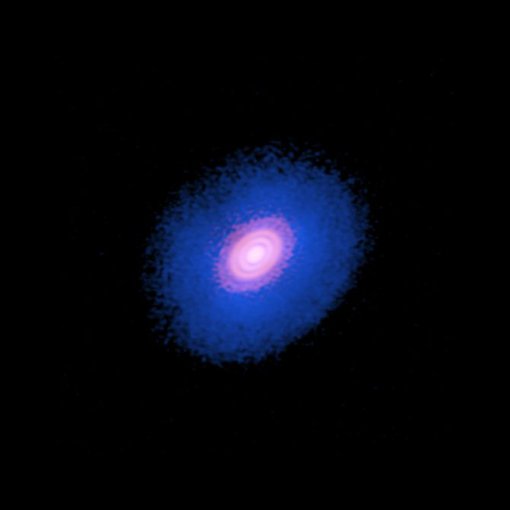 Composite image of the protoplanetary disk surrounding the young star HD 163296. The inner red area shows the dust of the protoplanetary disk. The broader blue disk is the carbon monoxide gas in the system. ALMA observed dips in the concentration and behavior of carbon monoxide in outer portions of the disk, strongly suggesting the presence of planets being formed.Image credit: ALMA (ESO/NAOJ/NRAO); A. Isella; B. Saxton (NRAO/AUI/NSF).

So while those images of patterns within the concentric rings of a protoplanetary disk are compelling and seem to be telling an important story, it’s actually the gas that is the key.

This is all an important coup for ALMA, which saw its first light in 2013. The observatory was not designed with protoplanet detection and characterization as a primary goal, but it is now front and center.

Coauthor Til Birnstiel of the University Observatory of Munich said the precision provided by ALMA is “mind boggling.” In a system where gas rotates at about 5 kilometers per second, he said, ALMA detected velocity changes as small as a few meters per second.

“Oftentimes in science, ideas turn out not to work or assumptions turn out to be wrong,” he said. “This is one of the cases where the results are much more exciting than what I had imagined.