Phobos and Deimos: Captured Asteroids or Cut from Ancient Mars? 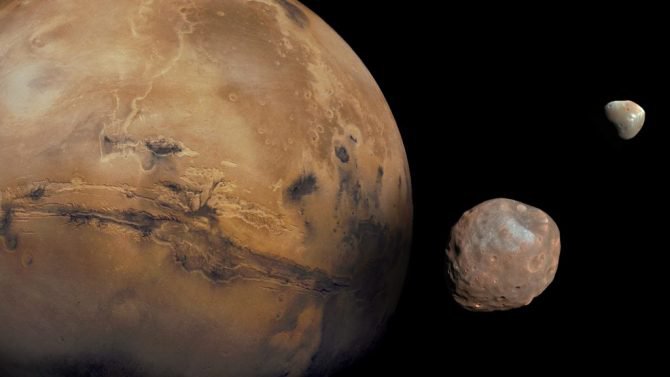 The global success rate for sending missions to land on the moons of Mars has hardly been impressive — coming in at zero out of three attempts. They were all led by the Russian (or former Soviet) space agencies, in collaboration with organizations ranging from the Chinese and Bulgarian space agencies to the Paris Observatory and the U.S. Planetary Society.

Now the Japanese space agency JAXA has approved its own mission to Phobos and Deimos, scheduled to launch from the Tanegashima Space Center in September 2024.

The Martian Moons eXploration (MMR) spacecraft will arrive at Mars in August 2025 and spend the next three years exploring the two moons and the environment around Mars. During this time, the spacecraft will drop to the surface of one of the moons and collect a sample to bring back to Earth. Probe and sample are scheduled to return to Earth in the summer of 2029.

Mars takes its name from the god of war in ancient Greek and Roman mythology. The Greek god Ares became Mars in the Roman adaptation of the deities. Mars’ two moons are named for Phobos and Deimos, in legend the twin sons of Ares who personified fear and panic.

Today, what the moons together personify is a compelling mystery, one regarding how in reality they came to be.

Both Martian moons are small, with Phobos’s average diameter measuring 22.2km, while the even smaller Deimos has an average size of just 13km. This makes even Phobos’s surface area only comparable to that of Tokyo. Their diminutive proportions means that the moons resemble asteroids, with irregular structures due to their gravity being too weak to pull them into spheres.

This leads to the question that has inspired a long-running debate: Were Phobos and Deimos formed during an impact with Mars, or are they asteroids that have been captured by Mars’s gravity?