Our Sun, as Never Seen Before 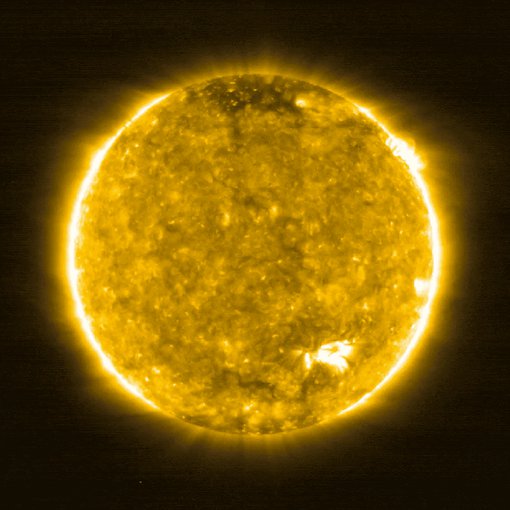 The first images of the Sun from the European Space Agency/NASA’s Solar Orbiter have been released and are stupendous. They are the closest photos ever taken of the star that we orbit, and have already revealed some fascinating features that nobody knew existed.

Launched early this year, the spacecraft completed its first close pass of the Sun in mid-June and began sending back images and data.

“These amazing images will help scientists piece together the Sun’s atmospheric layers, which is important for understanding how it drives space weather near the Earth and throughout the solar system.” aid Holly Gilbert, NASA project scientist for the mission at NASA’s Goddard Space Flight Center. 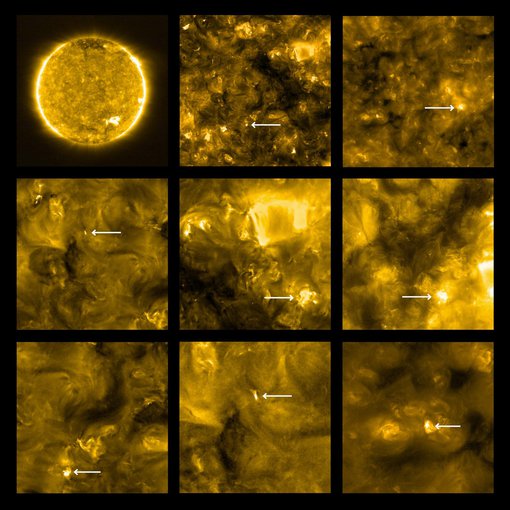 The orbiter has already found previously unknown found across the Sun miniature versions of the gigantic solar flares that reach out far into space. But these much smaller versions, deemed to be “campfires,” are so far seen by not understood.

Normally, the first images from a spacecraft confirm the instruments are working; scientists don’t expect new discoveries from them. But the Extreme Ultraviolet Imager, or EUI, on Solar Orbiter returned data hinting at solar features never observed in such detail.

“The campfires we are talking about here are the little nephews of solar flares, at least a million, perhaps a billion times smaller,” said mission principal investigator David Berghmans an astrophysicist at the Royal Observatory of Belgium said.

“When looking at the new high resolution EUI images, they are literally everywhere we look.” 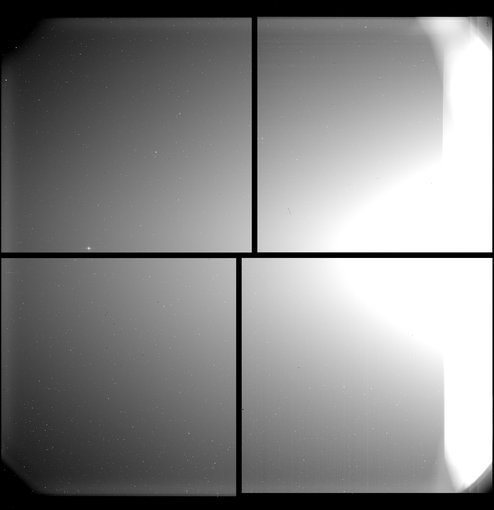 The first images from the Solar and Heliospheric Imager, or SoloHI instrument, reveal the zodiacal light (the bright blob of light on the right protruding towards the center). Mercury is also visible as a bright dot on the image left.Image credit: Solar Orbiter/SoloHI team (ESA & NASA), NRL.

That the Solar Orbiter has been able to continue on its mission has been no simple feat.

The coronavirus forced mission control at the European Space Operations Center (ESOC) in Darmstadt, Germany to close down completely for more than a week. During commissioning, the period when each instrument is extensively tested, ESOC staff were reduced to a skeleton crew. All but essential personnel worked from home.

“The pandemic required us to perform critical operations remotely – the first time we have ever done that,” said Russell Howard, principal investigator for one of Solar Orbiter’s imagers.

But the team adapted, even readying for an unexpected encounter with comet ATLAS’s ion and dust tails on June 1 and 6, respectively.

The spacecraft completed commissioning just in time for its first close solar pass on June 15. As it flew within 48 million miles of the Sun, all 10 instruments flicked on, and Solar Orbiter snapped the closest pictures of the Sun to date. (Other spacecraft have been closer, but none have carried sun-facing imagers.)

Solar Orbiter carries six imaging instruments, each of which studies a different aspect of the Sun. 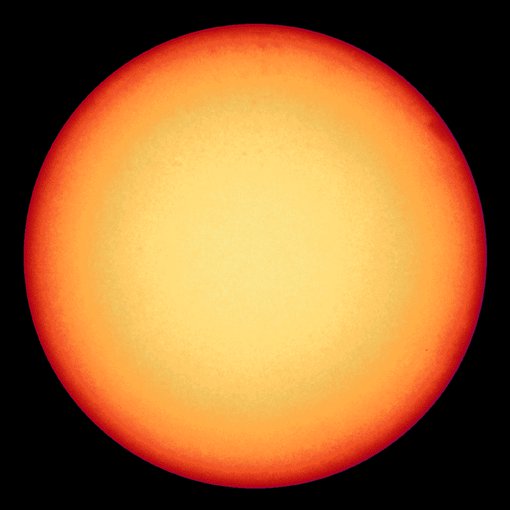 Images from the Polarimetric and Helioseismic Imager (PHI) on ESA/NASA's Solar Orbiter. PHI measures the magnetic field near the Sun’s surface and allows the investigation of the Sun’s interior via the technique of helioseismology.Image credit: Solar Orbiter/ PHI Team/ESA & NASA.

The Solar Orbiter will address big questions in solar system science to help us understand how our star creates and controls the giant bubble of plasma that surrounds the whole Solar System and influences the planets within it. It will concentrate on four main areas:

The solar wind and the corona’s magnetic field:

The solar wind is a constant stream of electrically charged particles that the Sun emits in all directions of space. Sometimes these particles originate in the Sun’s corona and sometimes from close to the photosphere, the visible surface of the Sun. The particles reach speeds of between 300 to 800 kilometres (185 to 500 miles) per second, but the acceleration mechanism is unknown. It is clearly linked to the magnetic field that exists in the corona, although here too is a mystery: no one knows how that magnetic field is generated in detail. Solar Orbiter will investigate what drives the solar wind, and the origin of the corona’s magnetic field.

Sudden solar events and their effects:

Sudden events on the Sun’s visible surface are known as transients. They propagate into the corona and sometimes outwards into the solar wind. They include explosive phenomena such as flares, coronal mass ejections, eruptive prominences, and shock waves. These events all create space weather by affecting the behaviour of the solar wind

Solar eruptions and the energetic particles they produce:

The Sun is the most powerful particle accelerator in the solar system. It regularly emits ‘storms’ of particles at close to the speed of light. These can penetrate the protective layers of Earth’s magnetic field and atmosphere and can even be detected at the surface of our planet. Solar energetic particle events are an extreme form of space weather and can severely affect space hardware, disrupt radio communications, and cause commercial air traffic to be routed away from polar regions, where the energetic particles find it easy to penetrate our atmosphere.

Generation of the Sun’s magnetic field:

The Sun’s magnetic field is responsible for all the solar activity we see; it drives the 11-year sunspot cycle, and dominates the behaviour of the solar atmosphere. Extensive studies have revealed a lot about the large-scale nature of the Sun’s magnetic field once it is free from the Sun’s interior. Yet the details of its generation inside the Sun – the so-called ‘solar dynamo’ – are not yet understood. 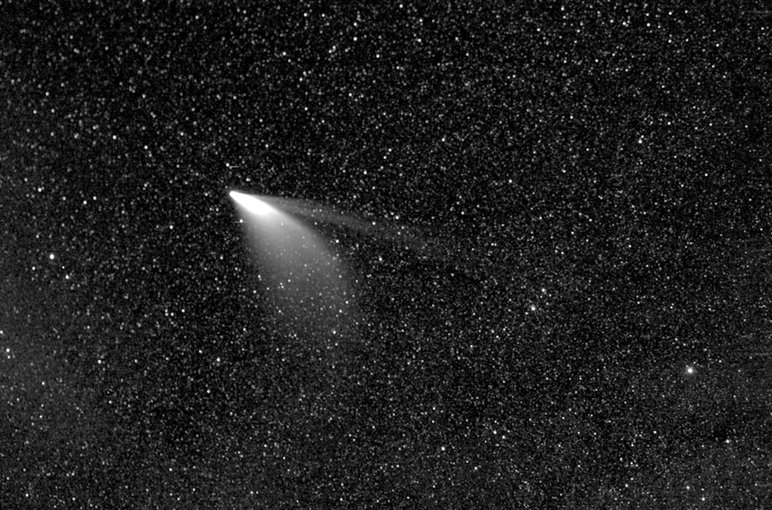 Scientists have been studying our sun for centuries, and at this point know an awful lot about it — the millions of degrees Fahrenheit heat that it radiates out from the corona, the tangled and essential magnetic fields that it creates, the million-miles-per-hour solar wind and the charged high-energy solar particles that can be so damaging to anything alive.

But we have now entered a time when solar science is taking a major leap forward with the deployment of three pioneering instruments that will explore the Sun and its surroundings as never before.

In addition to the Orbiter, NASA’s Parker Solar Probe and the National Science Foundation’s soon to be fully operational Inouye Solar Telescope on Hawai’i will all provide pathways to understand some of the mysteries of the Sun.

The Parker Probe was launched in 2018 and will be the first spacecraft to fly into the low solar corona. It will assess the structure and dynamics of the Sun’s coronal plasma and magnetic field, the energy flow that heats the solar corona and impels the solar wind, and the mechanisms that accelerate energetic particles. (And it will image objects such as the NEOWISE comet, above.)

The Inouye Solar Telescope, with the largest ground-based mirror studying the Sun, will focus on understanding the Sun’s explosive behavior, observations of magnetic fields are at the forefront of this innovative telescope. (A Many Worlds story about these missions and their relevance to habitability studies can be found here.)

And all of them will be sending back remarkable images. This remarkable set of images taken by the Inouye Telescope early this year, is of “cells” of the Sun.

The surface of the Sun, with each cell or kernel about the size of Texas. The image was taken by seen by the Inouye SolarTelescope in Hawai’i. (NSO/NSF/AURA)