Home

News

OSIRIS-REx and the Origin of ...

About Image
Watch OSIRIS-REx & the Origin of Life on the NASA Astrobiology YouTube channel at: https://www.youtube.com/watch?v=HCrwF4oBCvkMike Toillion / NASA Astrobiology
This artist's concept shows the Origins Spectral Interpretation Resource Identification Security - Regolith Explorer (OSIRIS-REx) spacecraft contacting the asteroid Bennu with the Touch-And-Go Sample Arm Mechanism or TAGSAM.NASA's Goddard Space Flight Center
This artist’s concept shows the trajectory and configuration of NASA’s OSIRIS-REx spacecraft during Matchpoint rehearsal, which is the final time the mission will practice the initial steps of the sample collection sequence before touching down on asteroid Bennu.NASA/Goddard/University of Arizona
Oct. 14, 2020
Feature Story

OSIRIS-REx and the Origin of Life

A historic moment is on the horizon for NASA’s first asteroid sample return mission, OSIRIS-REx. On Oct. 20, 2020, the spacecraft will descend to asteroid Bennu’s surface, touch down for a few seconds and collect a sample of the asteroid’s rocks and dust, which will be returned to Earth for study.

In a new video from the NASA Astrobiology Program, astrobiologists Dr. Jason Dworkin and Dr. Scott Sandford explain the importance of the OSIRIS-REx mission in the quest to understand the role that asteroids and other small bodies play in the origins of life on Earth. View the video below, or on the NASA Astrobiology YouTube channel. A transcript of the video is available below.

OSIRIS-REx & the Origin of Life

Dr. Jason Dworkin (NASA Goddard Space Flight Center):
Asteroids are remnants of the early solar system. They are leftover pieces as the solar system was forming, and around the same time that life was forming on the early earth or other bodies.
And so the same chemistry that was happening that could have influenced the origin of life is preserved on these relics of the solar system. 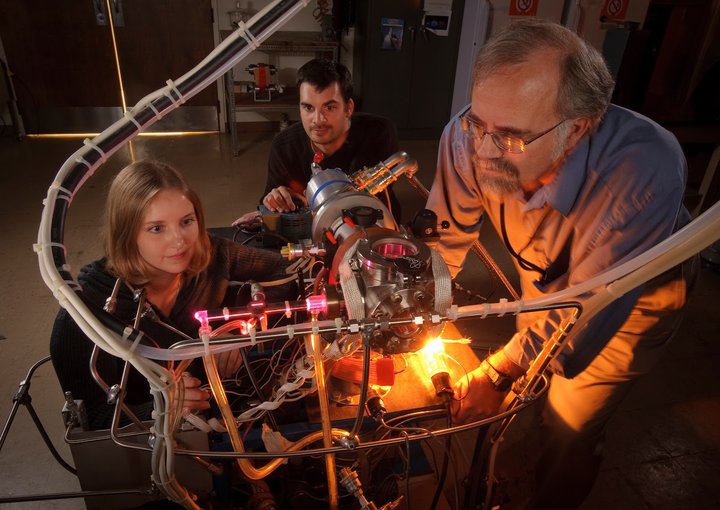 Dr. Scott Sandford (NASA Ames Research Center):
You know, you can’t have a life on a planet unless you have a biosphere, which means you have to have all the appropriate carbon, oxygen, hydrogen, nitrogen, all kinds of elements you need for life, and so, if those aren’t delivered then you’re not going to get anywhere.

Obviously, OSIRIS-REx is visiting one of these objects and it’s not just visiting any old asteroid; it’s visiting a really appropriate one for these questions about astrobiology because it’s a class of asteroid which we believe is associated with a type of meteorite called carbonaceous chondrites, which are amongst the most richest meteorites in terms of their carbon abundance, and also their molecular complexity.

So, OSIRIS-REx can then attack these various issues in several ways. Of course, one is we have some instruments on board the spacecraft which will give us a global look at the asteroid. 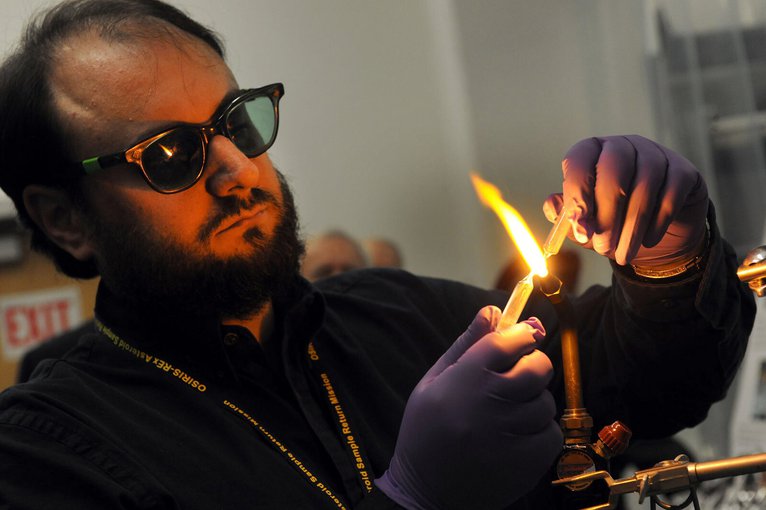 On October 20th of this year, OSIRIS-REx will attempt it’s first Touch-and-go, or TAG, event; this will be NASA’s first ever attempt to sample an asteroid in space, with the hopes of returning it to Earth.

Dworkin:
Sample return is the prime objective for the OSIRIS-REx mission. So, for fun, here is a LEGO version of the spacecraft: it has articulated solar arrays, a sample return canister and this three-meter long arm, and at the end of this is sort of like an old, car air filter but, of course, a bespoke design for this mission and for this asteroid, to collect a sample of material and bring it back to earth by touching the surface of the asteroid, collecting at least 60 grams, and as much as two kilograms of material; then, go up and measure the mass of the material, and then stow it in the sample return canister and bring it back to earth.

So when we get these samples back we’re going to be interested in these aspects of the samples: what are their bulk elemental abundances? And also, what kinds of specific compounds are present and what can they tell us about how they formed and where they formed and when they form? And, in particular, could any of these molecules have played a role in helping get life started on the Earth, or you know, any other place?

That will allow us to take a portion of the asteroid and really dig deep into what’s there, and then, because we have the global data from the in-situ instruments, we can then put all that information in the context of the asteroid as a whole.

Samples will be studied by people not yet born, using techniques not yet invented, to answer questions not yet asked.
Dr. Jason DworkinNASA Goddard Space Flight Center

Dworkin:
60 grams of sample is a bounty. If you look at, say the Stardust mission, it brought back maybe a milligram of material from comet Wild-2. That revolutionized our understanding of solar system dynamics and solar system formation.

So 60 grams, which is our baseline, is a huge bounty for the chemistry and astrobiology community.
The most exciting aspect of this mission is that when we collect the sample, 75 percent of this is archived for future generations. So, samples will be studied by people not yet born, using techniques not yet invented, to answer questions not yet asked.

People who are in school now can make life choices to enable them to study the samples and ask questions that you just can’t think of today or just don’t have the ability to analyze.

Sandford:
It’s just hard to overstate the power the scientific power you get out of this this is why missions like OSIRIS-REx are just so powerful it’s because mission gives you a legacy that just extends on into the future and never really ends.

Visit asteroidmission.org to learn more about the OSIRIS-REx mission and watch the upcoming TAG event live.