On the Origins of Biological Homochirality

Carbonaceous chondrites meteorites contain abundant organic material with structures as diverse as kerogen-like macromolecules and simpler soluble compounds ranging from polar amino acids and polyols to nonpolar hydrocarbons. Some of these compounds have identical counterparts in the terrestrial biosphere and it has been proposed that their exogenous delivery by meteorite and comet might have seeded the early Earth with biomolecule precursors prior to the onset of life.

One central problem in experimental prebiotic chemistry has been that synthetic processes relevant to molecular evolution, such as the formose reaction, result in complex mixture of compounds. In view of this, to explain the origin of chemically homogeneous polymers as RNA remains a daunting problem. The chemistry of meteorites, seemingly also a result of abiotic random processes, represent a significant exception in that some of its chiral amino acids show enantiomeric excesses of the same configuration as protein amino acids. Recent analyses of pristine Antarctic meteorites suggest that aldehydes may have carried such asymmetry during parent body reactions as well.

Because chiral homogeneity, which is essential to extant life, was probably an attribute necessary to the origin and/or development of life and meteoritic amino acids represents the only natural example of molecular asymmetry measured so far outside the biosphere, it appears reasonable to propose that such chiral trait may constitute a link between abiotic and prebiotic chemistry.

Experiments involving non-racemic amino acids of the type found in meteorites have shown that these compounds could have been suited to aid molecular evolution. For example, they can act as asymmetric catalysts and transfer their asymmetry to other prebiotic building blocks such as sugars. Also, small peptides of three to four residues of these amino acids readily form 3 10 helixes, which are themselves chiral and may be capable of a selective amplification of enantiomeric excesses upon further uptake of amino acids. In addition, non-racemic meteoritic amino acids lack an α-H and do not racemize in water, i.e., could have preserved their asymmetry through aqueous environments in early molecular evolution and avoided what Bada and Miller referred to as the “catastrophe of racemization” for racemizable protein amino acids. 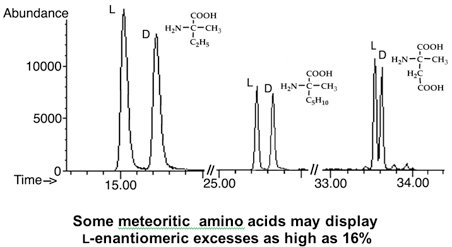 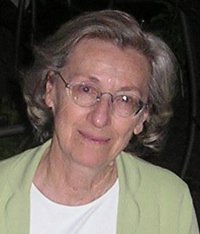 Sandra Pizzarello was born in Venice (Italy) in 1933 and studied in nearby Padua, where she obtained a Doctorate in Biological Sciences. After a brief fellowship, she “stayed home” to raise a family of four children and it took fifteen years. She moved to the US with this group and joined the Chemistry and Biochemistry Department of Arizona State University in 1977, where she still is Research Professor and Professor Emeritus. Her research has been devoted to the study of the organic material in carbonaceous chondrite meteorites, with emphasis on the molecular, isotopic, and chiral characterization of their soluble compounds. More recently, she has focused on the study of the non-racemic amino acids of meteorites, with compound specific isotopic analyses as well as model syntheses that would mimic their prebiotic catalytic activity and reactions. At the last ISSOL meeting in Florence, Sandra delivered the John Oro Lecture and was awarded Silver Medal of ISSOL.