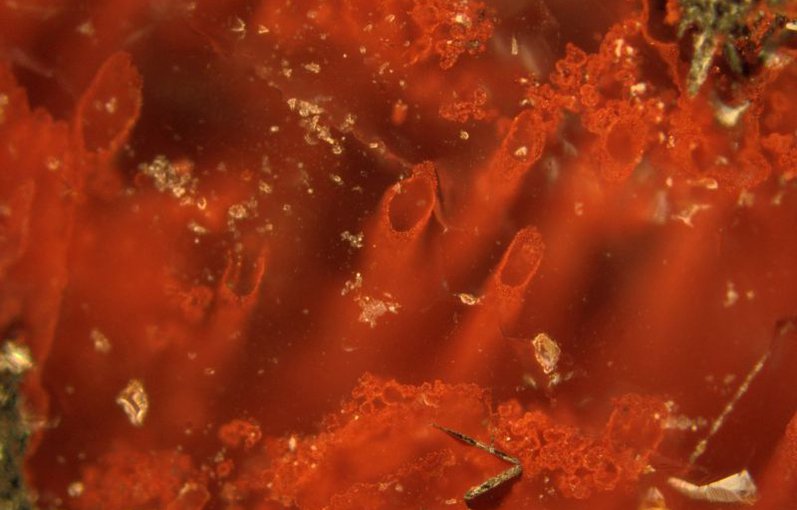 A reconstructed image of hematite tubes from microfossils discovered in hydrothermal vent precipitates dating back to at least 3,770 million years ago. Source: M. Dodd

Researchers have determined that fossilized evidence of bacteria from ancient seafloor hydrothermal vent precipitates found in the Nuvvuagittuq belt in Quebec, Canada is at least 3.77 billion years old (or even as much as 4.28 billion years old). The minimum age of the fossils would make them the oldest indication of life on Earth so far.

Lead authors Matthew Dodd and Dominic Papineau with their team analyzed jasper rock samples, finding microfossils of filaments and tubes filled with hematite, the mineral form of ferric oxide or rust, similar to the remains of modern day microbes living around hydrothermal vents. The presence of carbonate and carbonaceous minerals provided supporting signs of oxidation and biological activity. The paper, “Evidence for early life in Earth’s oldest hydrothermal vent precipitates” was published in Nature.

The University College London produced a video detailing the study:

Funding for the research was provided by the University College London, the London Centre for Nanotechnology, the Engineering and Physical Sciences Research Council, the NASA Astrobiology Institute, the Carnegie Institution of Washington, and Carnegie of Canada.

The paper aligns with theories connecting the beginnings of life to hydrothermal vents, and has sparked wide public interest, in addition to some debate. An article published in the Washington Post has astrobiologists weighing in on the discovery, which if fully verified would encourage research into the search for life on Mars, Europa, and other planets based on similar evidence.