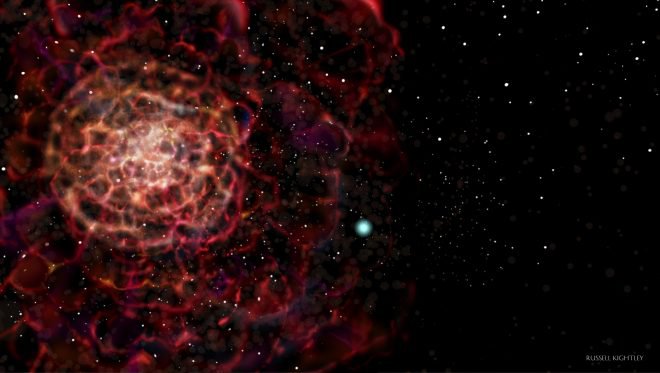 Artistic view of the aftermath of a supernova explosion, with an unexpected white dwarf remnant. These super-dense but no longer active stars are thought to play a key role in many supernovae explosion. (Copyright: Russell Kightley)

White dwarf stars, the remnant cores of low-mass stars that have exhausted all their nuclear fuel, are among the most dense objects in the sky.

Thought to be the final evolutionary state of stars whose mass is not high enough to become a neutron star — a category that includes the Sun and over 97% of the other stars in the Milky Way — they are dim objects first identified a century ago, but, only in the last decade, the subject of broad study.

In recent years, the white dwarfs have become more and more closely associated with supernovae explosions, though the processes involved remained hotly debated. A team using the Hubble Space Telescope even captured before and after images of what is hypothesized to be an incomplete white dwarf supernova. What was left behind has been described by some as a “zombie star.”

Now a team of astronomers led by Stephane Vennes of the Czech Academy of Sciences has detected another zombie white dwarf, LP-40-365, that they put forward as a far-flung remnant of a long-ago supernova explosion. This is considered important and unusual because it would represent a first detection of such a remnant long after the supernova conflagration.

This dynamic is well captured in an animation accompanying the Science paper that describes the possible remnant. Here’s the animation and a second-by-second description of what is theorized to have occurred:

00.0 sec: Initial binary star outside the disk of the Milky Way galaxy. A massive white dwarf accreting
material through an accretion disk from its red giant companion star. The stars orbit around the center of
mass of the binary system.

14.6 sec: The white dwarf reaches the Chandrasekhar mass limit and explodes as a bright Type Ia
supernova. However, the explosion is not perfect; a fraction of the white dwarf shoots out like a shrapnel to the left. The binary system disrupts.

18.0 sec: The supernova explosion again, at an edge – on view. The shrapnel comes at the viewer and passes by.

20.0 sec: After passing by, the remnant flies off towards the disk of the Milky Way towards the spiral arm with the Solar System.

24.0 sec : The fast moving remnant from the solar neighborhood as it passes by the stars in our galactic arm, including the Sun. The remnant gets in the reach of our telescopes. (Copyright Sardonicus Pax)

A supernova — among the most powerful forces in the universe — occurs when there is a change in the core of a star. A change can occur in two different ways, with both resulting in a thermonuclear explosion.

Type Ia supernova occurs at the end of a single star’s lifetime. As the star runs out of nuclear fuel, some of its mass flows into its core. Eventually, the core is so heavy that it cannot withstand its own gravitational force. The core collapses, which results in the giant explosion of a supernova. The sun is a single star, but it does not have enough mass to become a supernova.

The second type takes place only in binary star systems. Binary stars are two stars that orbit the same point. One of the stars, a carbon-oxygen white dwarf, steals matter from its companion star. Eventually, the white dwarf accumulates too much matter. Having too much matter causes the star to explode, resulting in a supernova.

Type Ia supernovae, which are the result of the complete destruction of the star in a thermonuclear explosion, have a fairly uniform brightness that makes them useful for cosmology. The light emitted by the supernova explosion can be, for a short while at least, as bright as the whole of the Milky Way.

Recently, astronomers have discovered a related form of supernova, called Type Iax, which look like Type Ia, but are much fainter. Type Iax supernovae may be caused by the partial destruction of a white dwarf star in such an explosion. If that interpretation is correct, part of the white dwarf should survive as a leftover object.

And that leftover object is precisely what Vennes et al. claim to have found.

They have identified LP 40-365 as an unusual white dwarf with a low mass, high velocity and strange composition of oxygen, sodium and magnesium – exactly as might be expected for the leftover star from a Type Iax event. Vennes describes the white dwarf remnant his team has detected as a “compact star,” and perhaps the first of its kind in terms of the elements it contains.

The team calculate that the explosion must have occurred between five and 50 million years ago.