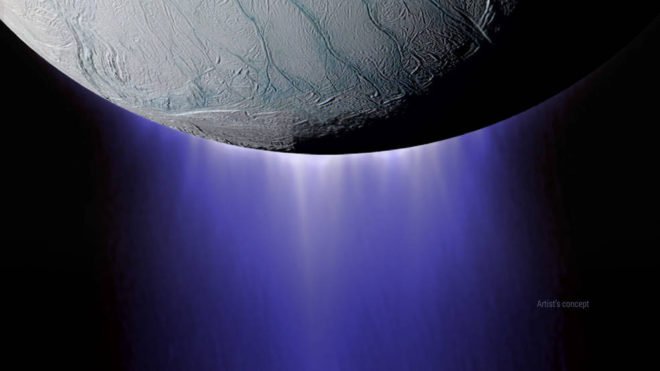 NASA’s Cassini spacecraft completed its deepest-ever dive through the icy plume of Enceladus on Oct. 28, 2015. (NASA/JPL-Caltech)

It wasn’t that long ago that Enceladus, one of 53 moons of Saturn, was viewed as a kind of ho-hum object of no great importance. It was clearly frozen and situated in a magnetic field maelstrom caused by the giant planet nearby and those saturnine rings.

That view was significantly modified in 2005 when scientists first detected signs of the icy plumes coming out of the bottom of the planet. What followed was the discovery of warm fractures (the tiger stripes) near the moon’s south pole, numerous flybys and fly-throughs with the spacecraft Cassini, and by 2015 the announcement that the moon had a global ocean under its ice.

Now the Enceladus story has taken another decisive turn with the announcement that measurements taken during Cassini’s final fly-through captured the presence of molecular hydrogen.

To planetary and Earth scientists, that particular hydrogen presence quite clearly means that the water shooting out from Enceladus is coming from an interaction between water and warmed rock minerals at the bottom of the moon’s ocean– and possibly from within hydrothermal vents.

These chimney-like hydrothermal vents at the bottom of our oceans — coupled with a chemical mixture of elements and compounds similar to what has been detected in the plumes — are known on Earth as prime breeding grounds for life. One important reason why is that the hydrogen and hydrogen compounds produced in these settings are a source of energy, or food, for microbes.

A logical conclusion of these findings: the odds that Enceladus harbors forms of simple life have increased significantly.

To be clear, this is no discovery of extraterrestrial life. But it is an important step in the astrobiological quest to find life beyond Earth.

“The key here is that Enceladus can produce fuel that could be used by biology,” said Mary Voytek, NASA’s senior scientist for astrobiology, referring to the detection of hydrogen.

“So now on this moon we have many of the components associated with life — water, a source of energy and many of the important chemical building blocks. Nothing coming from Cassini will tell is if there is biology there, but we definitely have found another important piece of evidence of possible habitability.” 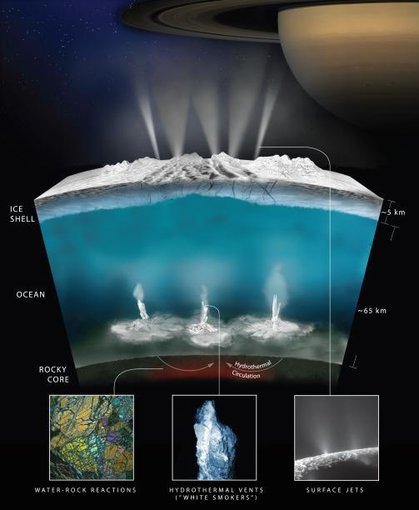 This graphic illustrates how some scientists on NASA’s Cassini mission think water interacts with rock at the bottom of the ocean of Saturn’s icy moon Enceladus, producing hydrogen gas (H2). It remains unclear whether the interactions are taking place in hydrothermal vents or more diffusely across the ocean. (NASA)