About Image
A technical session at AbSciCon 2017. Over 800 scientists attended the biennial conference, held this year in Mesa, Arizona.NASA Astrobiology
Researchers discuss recent developments in origin of life studies. From left to right: Sara Walker (Arizona State University), Leroy Cronin (Glasgow University), Betul Kacar (Harvard University), and Irena Mamajanov (ELSI, Tokyo Institute of Technology).NASA Astrobiology
An artist rending of what a 16-meter or larger telescope. It would not only be the largest space telescope by far, but would be larger than any current ground-based telescope.NASA
May 19, 2017
Feature Story

The big questions that challenge the field of astrobiology are as old as humanity: Are we alone in the Universe and how did life on Earth begin?

There are no firm answers to those questions yet, but the intensity and breadth of the effort was on display April 24-28 when more than 800 scientists gathered for the biennial Astrobiology Science Conference (AbSciCon), this year held in Mesa, Arizona. All the technical talks, plenaries and endless exchanges and debates among scientists highlighted how much the field has evolved, with some consensus forming around a few fundamental themes.

When it comes to extraterrestrial life, no longer is the main question whether bodies like Mars or the outer Solar System’s icy moons could be habitable. Rather, researchers have moved on to determining how they can find evidence of life, past or present, through the presence of bio-signatures and other techniques.

In the ‘origins of life’ field, new approaches, such as paleo-genetics (the study of preserved genetic material from the remains of ancient organisms) and “messy chemistry” (the complex tars of early Earth), have taken a place alongside traditional techniques used to explain early Earth’s transition from geochemistry to biochemistry.

And regarding NASA missions, both planned and proposed, excitement was directed toward the icy moons of the outer Solar System, where oceans below the icy crusts of Europa, Enceledus and other bodies might provide the first evidence of extraterrestrial life.

One of the plenary sessions featured a panel of speakers who each took a position on where signs of life might first be found: on Mars, on icy moons, on exoplanets, from afar via SETI, in a shadow biosphere on Earth, or none of the above. By a show of hands in the the room, the clear winner on the best prospects for finding life was on the icy moons.

“We are turning the corner on searching for life,” said Ariel Anbar, an Arizona State University geochemist and one of the organizers of the conference. “The center of gravity of astrobiology exploration is finally moving outward from Mars.” 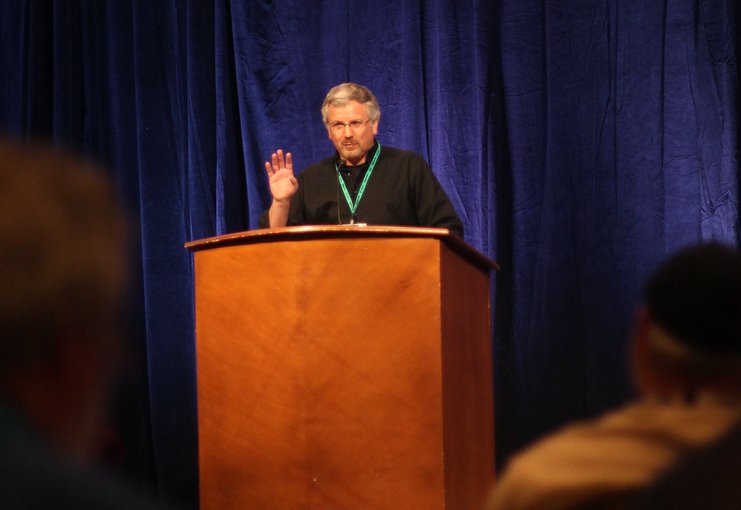 In thinking big about the future of astrobiology, nothing quite matched the proposals by former astronaut and NASA science director John Grunsfeld and Yale astronomer Debra Fischer. Both spoke of the prospects of a NASA space telescope for the 2030s that would be at least 16 meters (more than 50 feet) in diameter, a size that would exceed the largest telescopes now on Earth and would be capable of detecting potential biosignatures in a revolutionary way. (In contrast, the Hubble mirror is 2.4 meters and the James Webb Space Telescope mirror is 6.5 meters.)

Fischer is pitching a the gigantic space telescope, called LUVOIR, now under study by the NASA science definition team that she heads. Grunsfeld argued for a potentially even larger LUVOIR that would be assembled in deep space by astronauts, a key step in creating the kind of space architecture needed to become space-faring. “To stay at the forefront of science and engineering,” Grunsfeld said, “we need to be bold.”

Numerous sessions focused on identifying exoplanet bio-signatures, including the pigments left by photosynthesis; the atmospheric compounds found in bio-hazes; and cataloguing the spectral features of all bio-signature gases on Earth as a library for future observations. The uses and potential pitfalls of relying on oxygen as an exoplanet bio-signature were widely discussed as well. 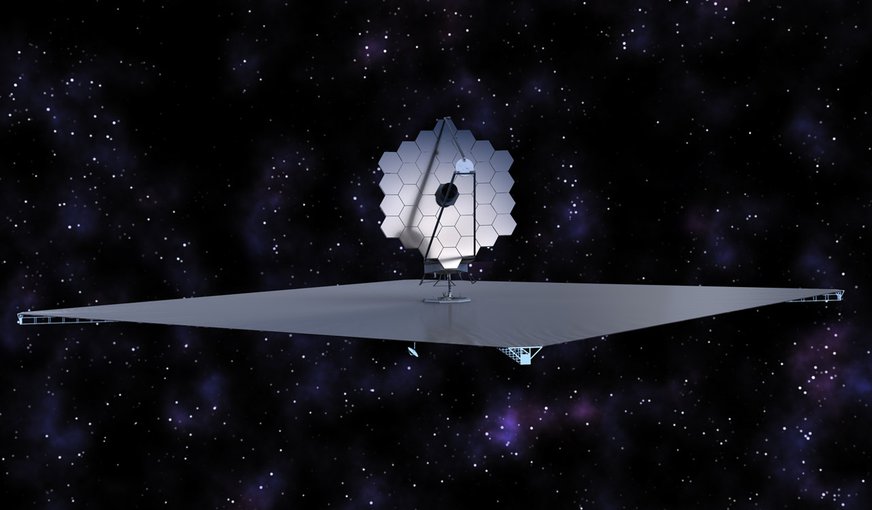 An artist rending of what a 16-meter or larger telescope. It would not only be the largest space telescope by far, but would be larger than any current ground-based telescope.Image credit: NASA.

Our ability to reach potential habitats in our solar system with space probes has raised more immediate concerns about protecting them from bacteria, viruses or other organisms from Earth. Bacterial spaceship stowaways can survive as spores for 10 million years while enduring enormous heat and radiation, and can quickly return to active life when conditions are right.

Under an international agreement signed in 1967, nations are prohibited from taking a more than 1 in 10,000 chance of contaminating another celestial body. In practice, that has meant intense de-contamination of landing capsules, avoidance of areas considered most likely to harbor life or signs of ancient life, and precise plans on how missions will end. A prominent example is the coming grand finale of the Cassini mission when the spacecraft will be sent into Saturn to implode rather than take a chance that it might drift towards moons that might harbor life.

At the opening plenary, Andrew Maynard, director of the Risk Innovation Laboratory at Arizona State University, analyzed planetary protection as a risk problem. He defined it as “wicked,” meaning there are no easy solutions but rather different priorities and demands. Scientists, for instance, tend to see planetary protection as a matter of scientific integrity, a way to make sure they don’t “rediscover” life brought there by humans. Upcoming voyages to sample the oceans of icy moons as well as the continued search for ancient Martian biosignatures make planetary protection an increasingly pressing matter.

Brent Sherwood, a program manager at NASA’s Jet Propulsion Laboratory, believes it’s time to re-examine planetary protection guidelines, given that the last broad review was 17 years ago. “Anything that is a foundational requirement for a mission, like planetary protection, ought to be repeatedly revisited,” he said. “Since it is so foundational, let’s test it against our current understandings of survivability, our ability to sterilize instruments and landers and everything else.” 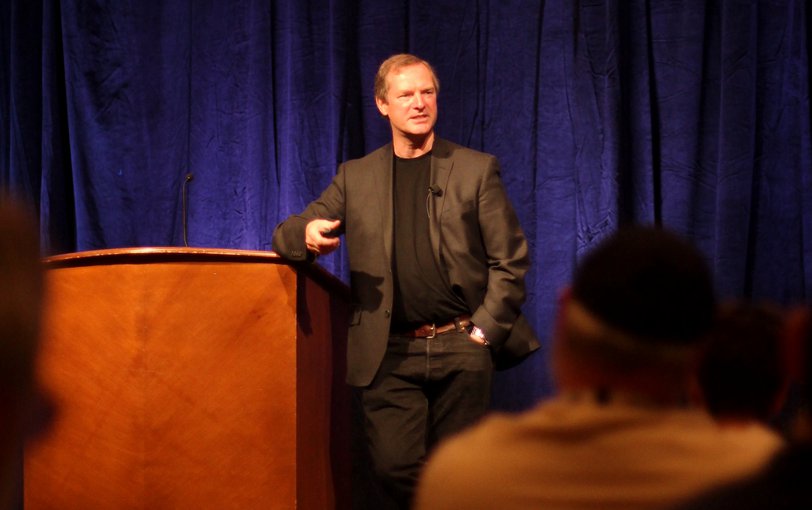 A plenary on “Recent Developments in Origins of Life Studies” featured Betul Kacar of Harvard University and Irena Mamajanov of the Earth-Life Science Institute in Tokyo.

Kacar made the case that engineering and modifying synthetic versions of the enzyme RuBisCo — a ubiquitous compound that helps turn non-organic carbon into the organic carbon of leaves and bacteria — is a pathway to understanding the earliest molecules associated with life. Kacar said the ultimate goal of her work is to engineer LUCA (the last universal common ancestor) with no prior “genetic baggage.” That means, in part, constructing a genetic tree of the RuBisCO protein family to see how it evolved, and then comparing the results with the fossil signatures found in rocks. “The fields of origins of life, bacterial evolution and synthetic biology will work together and tie lab information to what we find in the rock record.” she said.

Mamjanov works on “messy chemistry” by focusing on the tars left over from thousands of lab experiments, as opposed to the amino acids, nucleotides and other key molecules of life that are almost uniformly considered the prizes of such experiments.

It stands to reason that gunky tar, present in Earth’s early environment, played a role in driving life because tars allow some essential processes to occur. Tars can concentrate compounds, encapsulate them, and provide a kind of primitive (messy) scaffolding that can evolve into the essential backbones of a living entity.

“In classical origin of life synthetic chemistry you’re looking at one reaction and its maximum result,” she said. “It’s A + B = C+D. But life is not like that; it isn’t any single reaction. You’re looking at a subset of reactions and we ask: ‘Why not look at the whole complex system?’”

The diversity of approaches to the origin of life field was on display as researchers described their hypotheses. Andrew Steele, a microbial astrobiologist at the Carnegie Institution for Science spoke about the role of prions—best know for their destructive role in “mad cow disease” — in the origins and workings of the early genetic code. His work has identified 5,341 proteins with a high prion propensity across all domains of life.

Zachary Adam, a origin-of-life astrobiologist at Harvard University, discussed how radioactive particles from distant galaxies, or natural nuclear reactors on Earth (such as uranium deposit where self-sustaining nuclear chain reactions occur) could have been a necessary spark for life. 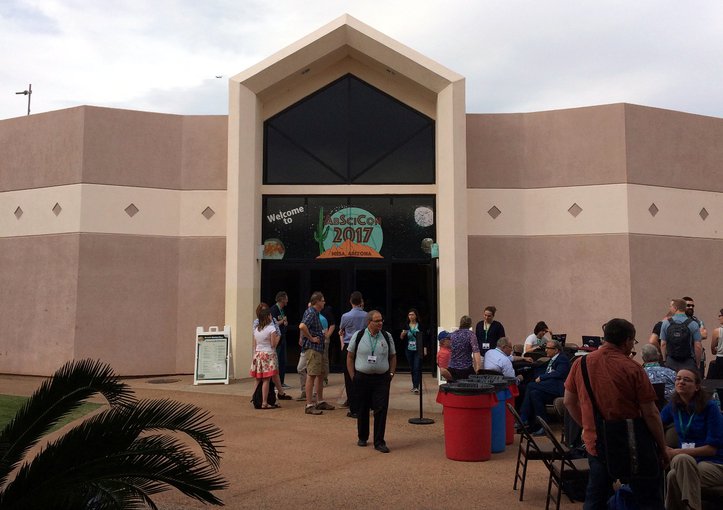 The Mesa AbSciCon gathering was the ninth of its kind, and showcased a maturing of the field. As described by Shawn Domogal-Goldman of NASA Goddard, and an author or collaborator on 13 papers presented during the meeting, “the folks I met as a graduate student, attending AbGradCon, were now panelists and speakers at plenary sessions.”

Because many astrobiologists have long and collegial ties, he said, “the lessons we learn from Europa are more likely to be applied to Mars and exoplanets and vice versa.”

Mary Voytek, NASA’s senior scientist for astrobiology, said the highlights for her were the sessions on recent discoveries of Earth-sized exoplanets in nearby systems, and the confirmation of habitable ocean worlds. She also was struck by the focus on biosignatures and new instruments for life detection.

“AbSciCon is the most dynamic science meeting that I attend. The science is cutting edge and the passion and commitment of the scientists is unmistakable.”

Sessions were live streamed, and the recordings of AbSciCon 2017 are now available on the NASA Astrobiology YouTube channel.

The Program and Abstracts for AbSciCon 2017 can be viewed at https://www.hou.usra.edu/meetings/abscicon2017/program-abstracts/view/.