New Instrument Could Search for Signatures of Life on Mars

A sensing technique that the U.S. military currently uses to remotely monitor the air to detect potentially life-threatening chemicals, toxins, and pathogens has inspired a new instrument that could “sniff” for life on Mars and other targets in the solar system — the Bio-Indicator Lidar Instrument, or BILI. 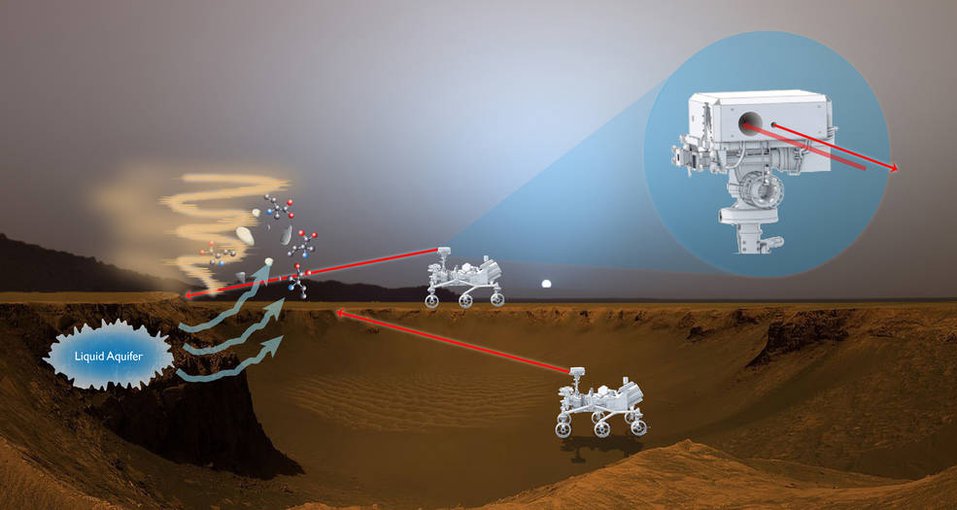 This artist’s rendition shows how a proposed laser-fluorescence instrument could operate on Mars. Credits: NASA

Branimir Blagojevic, a NASA technologist at the Goddard Space Flight Center in Greenbelt, Maryland, formerly worked for a company that developed the sensor. He has applied the technology to create an instrument prototype, proving in testing that the same remote-sensing technology used to identify bio-hazards in public places also could be effective at detecting organic bio-signatures on Mars.

BILI is a fluorescence-based lidar, a type of remote-sensing instrument similar to radar in principle and operation. Instead of using radio waves, however, lidar instruments use light to detect and ultimately analyze the composition of particles in the atmosphere.

Although NASA has used fluorescence instruments to detect chemicals in Earth’s atmosphere as part of its climate-studies research, the agency so far hasn’t employed the technique in planetary studies. “NASA has never used it before for planetary ground level exploration. If the agency develops it, it will be the first of a kind,” Blagojevic said. Branimir Blagojevic has developed a prototype instrument that would “sniff” for biosignatures in Martian dust. The screen behind Blagovevic shows the graphics user interface for the Bio-Indicator Lidar Instrument, developed by Science and Engineering Services, Inc. while he worked there. Credits: NASA/W. Hrybyk

A Rover’s ‘Sense of Smell’
As a planetary-exploration tool, Blagojevic and his team, Goddard scientists Melissa Trainer and Alexander Pavlov (both former NASA Postdoctoral Program Fellows and affiliates of the NASA Astrobiology Institute), envision BILI as primarily “a rover’s sense of smell.”

Positioned on a rover’s mast, BILI would first scan the terrain looking for dust plumes. Once detected, the instrument, then would command its two ultraviolet lasers to pulse light at the dust. The illumination would cause the particles inside these dust clouds to resonate or fluoresce. By analyzing the fluorescence, scientists could determine if the dust contained organic particles created relatively recently or in the past. The data also would reveal the particles’ size.

“If the bio-signatures are there, it could be detected in the dust,” Blagojevic said.

BILI’s Beauty
The beauty of BILI, Blagojevic added, is its ability to detect in real-time small levels of complex organic materials from a distance of several hundred meters. Therefore, it could autonomously search for bio-signatures in plumes above recurring slopes — areas not easily traversed by a rover carrying a variety of in-situ instruments for detailed chemical and biological analysis. Furthermore, because it could do a ground-level aerosol analysis from afar, BILI reduces the risk of sample contamination that could skew the results.

“This makes our instrument an excellent complementary organic-detection instrument, which we could use in tandem with more sensitive, point sensor-type mass spectrometers that can only measure a small amount of material at once,” Blagojevic said. “BILI’s measurements do not require consumables other than electrical power and can be conducted quickly over a broad area. This is a survey instrument, with a nose for certain molecules.”

With such a tool, which also could be installed on an orbiting spacecraft, NASA could dramatically increase the probability of finding bio-signatures in the solar system, he added. “We are ready to integrate and test this novel instrument, which would be capable of detecting a number organic bio-signatures,” Blagojevic said. “Our goal is increasing the likelihood of their discovery.”

Long Heritage
Blagojevic hopes to further advance BILI by ruggedizing the design, reducing its size, and confirming that it can detect tiny concentrations of a broad range of organic molecules, particularly in aerosols that would be found at the ground level on Mars.

“This sensing technique is a product of two decades of research,” Blagojevic said, referring to the technology created by his former employer, Science and Engineering Services, LLC..