About Image
This illustration shows a protoplanetary disk of dust and gas around a young star. New research by Rice University shows that Earth’s nitrogen came from both inner and outer regions of the disk that formed our solar system, contrary to earlier theory.NASA/JPL-Caltech
Feb. 17, 2021
Feature Story

New Insights Into How Earth Got Its Nitrogen

Scientists have long held that many of the important compounds and elements that make life possible on Earth arrived here after the planet was formed and was orbiting the sun. These molecules came via meteorites and comets, it was thought, from the colder regions beyond Jupiter.

But in a challenge to that long-accepted view, a team from Rice University has found isotopic signatures of nitrogen from both the inner and the outer disk in iron meteorites that fell to Earth. What this strongly suggests is that the seeds of rocky, inner solar system planets such as Earth were bathed in dust that contained nitrogen and other volatiles, and the growing planet kept some of that “local” material. 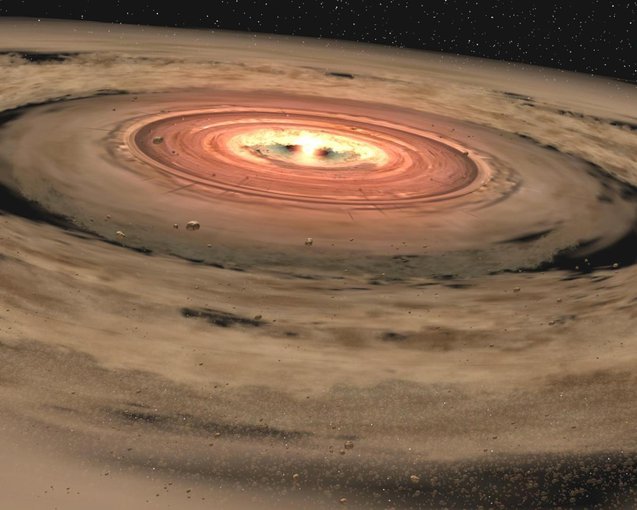 This illustration shows a protoplanetary disk of dust and gas around a young star. New research by Rice University shows that Earth’s nitrogen came from both inner and outer regions of the disk that formed our solar system, contrary to earlier theory.Image credit: NASA/JPL-Caltech.

“Our work completely changes the current narrative,” said Rice University graduate student and lead author Damanveer Grewal. “We show that the volatile elements were present in the inner disk dust, probably in the form of refractory (non-gaseous) organics, from the very beginning. This means that contrary to current understanding, the seeds of the present-day rocky planets — including Earth — were not volatile-free.”

This work helped settle a prolonged debate over the origin of life-essential volatile elements — such as hydrogen, water, carbon dioxide, methane, nitrogen, ammonia — on Earth and other rocky bodies in the solar system.

“Researchers have always thought that the inner part of the solar system, within Jupiter’s orbit, was too hot for nitrogen and other volatile elements to condense as solids, meaning that volatile elements in the inner disk were only in the gas phase,” Grewal said. 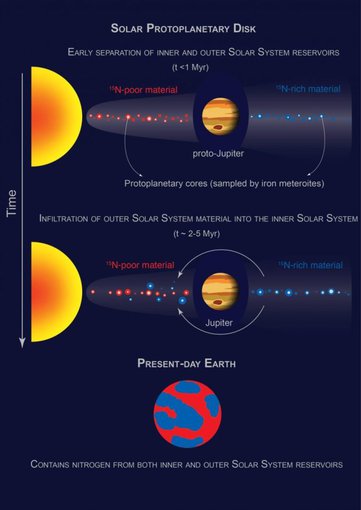 The solar protoplanetary disk was separated into two reservoirs, with the inner solar system material having a lower concentration of nitrogen-15 and the outer solar system material being nitrogen-15 rich. The nitrogen isotope composition of present-day Earth lies in between, according to a new Rice University study that shows it came from both reservoirs.Image credit: Illustration by Amrita P. Vyas.

Because the seeds of present-day rocky planets, also known as protoplanets, grew in the inner disk by accreting locally sourced dust, he said it appeared they did not contain nitrogen or other volatiles because of the high temperatures, necessitating their delivery from the outer solar system.

But new evidence clearly shows only some of the planet’s nitrogen came from beyond Jupiter.

“This idea of separate reservoirs had only been developed for nonvolatile elements,” Grewal said. “We wanted to see if this is true for volatile elements as well. If so, it can be used to determine which reservoir the volatiles in present-day rocky planets came from.”

As described by Rice professor, Rajdeep Dasgupta, this is potentially of great interest and importance in both understanding how our solar system planets formed but also regarding how planets in other distant solar systems might have formed as well. And since volatiles are essential for life as we know it, the finding has implications for potential habitability on a large number of exoplanets.

“At least for our own planet, we now know the entire nitrogen budget did not come only from outer solar system materials,” Dasgupta said. This strongly suggests that even solar systems that never had the kind of giant planet migration of our solar system — — which helped bring in volatile-rich materials from the outer zones — their inner rocky planets closer to the star could still acquire volatiles from their neighboring zones. 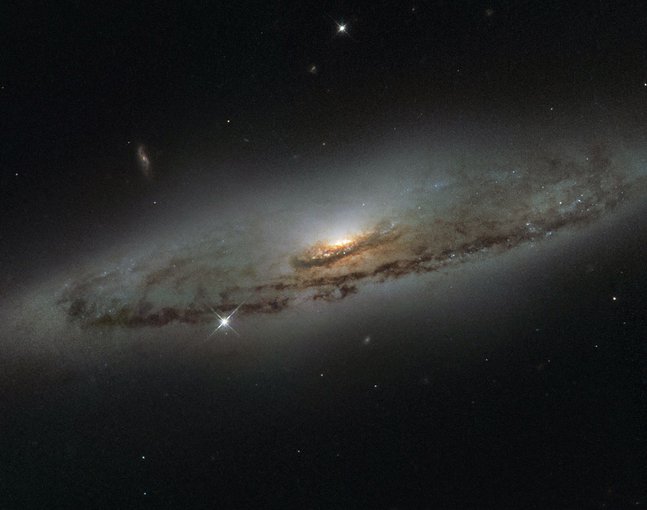 As described by Grewal, the new information about the origins of nitrogen comes from the study of meteorites and ancient iron meteorites in particular.

Over the last decade, he explained, scientists have discovered that the isotopic composition of certain non-volatile elements (e.g., molybdenum, ruthenium) is different for meteorite parent bodies that grew within and beyond Jupiter’s orbit.

This also holds true for iron meteorites (remnants of the cores of earliest formed protoplanets) implying that the solar system was separated into two spatially isolated reservoirs within one to two million years after the solar system formation.

What makes this research possible is that the parent bodies accrete their mass in a certain location and freeze the memory of the isotope signatures of that particular location. When a meteorite parent body moves after its growth, there is minimal chance of contamination because it does not accrete more mass.

“This was an undertaking merely in the spirit of jest and simple curiosity with no hope of finding anything concrete,” he wrote. “But I was baffled to see that nitrogen did, in fact, show a behavior similar to the non-volatile elements — inner and outer solar system meteorites had isotopically distinct nitrogen! The dichotomy of nitrogen isotopic composition between inner and outer solar system protoplanets was too good to be true. I thought I was doing something wrong and decided to forget about it.”

After listening to various talks on isotopic dichotomy of non-volatile elements at the 2019 Goldschmidt Conference, he re-checked all the data and again nitrogen showed an almost perfect dichotomy. On returning to Rice, he showed the plots to his mentors – Professors Cin-Ty Lee and Dasgupta. “They too were amazed and encouraged to me to go ahead and undertake a study on the subject,” he said.

And that work resulted in the recent paper published by Nature Astronomy.

CLEVER Planets is a research group based at Rice University which is a member of NASA’s NExSS initiative, which works on issues related to exoplanet formation, composition, habitability and more.Image credit: CLEVER Planets.

Many Worlds published another column featuring CLEVER Planets research published in Science Advances. It focused on the moon-creating collision and how that brought volatiles to Earth and could have supplied the majority of life-essential elements that we see at the mantle and surface today.

Dasgupta said it does not appear that Earth’s initial composition of bulk silicate, on its own, could have attained the concentrations of those life-essential volatiles needed to produce our atmosphere and hydrosphere and biosphere.

Dasgupta said the current nitrogen paper is consistent with the moon-creating research — both show that material with both inner-solar system and outer-solar system isotopic signatures contributed to the formation of Earth.

Dasgupta is principal investigator of CLEVER Planets, a NASA-funded collaborative project exploring how life-essential elements might have come together on Earth and on distant exoplanets.

CLEVER Planets is part of the Nexus for Exoplanet System Science, or NExSS, anastrobiology research coordination network that is dedicated to the study of planetary habitability (and that sponsors Many Worlds.)

The team involves more than a dozen research groups from Rice, NASA’s Johnson Space Center, UCLA, the University of Colorado Boulder and the University of California, Davis. They are a multi-disciplinary team, including observational astronomers, astrophysicists, geodynamicists, petrologists, high- and low-temperature geochemists, climate scientists, fluid dynamicists, and organic chemists.

CLEVER Planets was formed in 2018 and its team members focus, said Dasgupta, on this central question: How life essential elements and compounds originate and how they behave during planet formation and early planet evolution.

There are many reasons for this type of research, he said, but the key question is what conditions lead to habitability and which do not?

The goal of CLEVER Planets, then, is to “track elements through lenses of early planetary processes,” Dasgupta said. “Where do they come from, how do they behave under different conditions, what happens to life-essential elements as a result of volcanism, or when they cool and solidify?”

During these processes and more, the planets show just how clever they are.