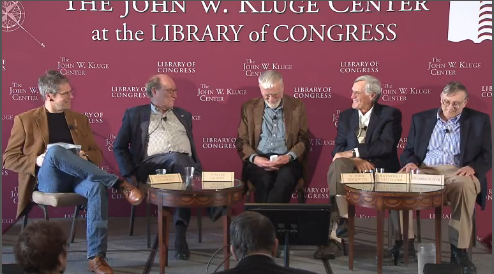 Back in March 2016, science historian and current Blumberg Chair in Astrobiology, Dr. Nathaniel Comfort, led a program at the Kluge Center entitled “The Origins of the RNA World,” bringing into the conversation four scientists involved in the pivotal shift in origins of life research: Dr. Walter Gilbert, Dr. W. Ford Doolittle, Dr. Ray Gesteland, and Dr. George E. Fox. The webcast is available for streaming.

Comfort later spoke with Dan Turello at the Library of Congress, touching on the history of the RNA World hypothesis, its influence on current research on the last universal common ancestor (LUCA), and how the RNA World pushes forward synthetic biology and modern genomics. He also highlighted some of the perks of being Chair with full access to the Library collections. The interview is available at the Library of Congress website.

A future astrobiology symposium hosted by Comfort is planned for September 15. More information about “The Emergence of Life: On the Earth, in the Lab, and Elsewhere” can be found at: http://www.loc.gov/loc/kluge/news/originslife.html.

To learn more about the Baruch S. Blumberg NASA/Library of Congress Chair in Astrobiology program, go to: http://www.loc.gov/loc/kluge/fellowships/NASA-astrobiology.html.