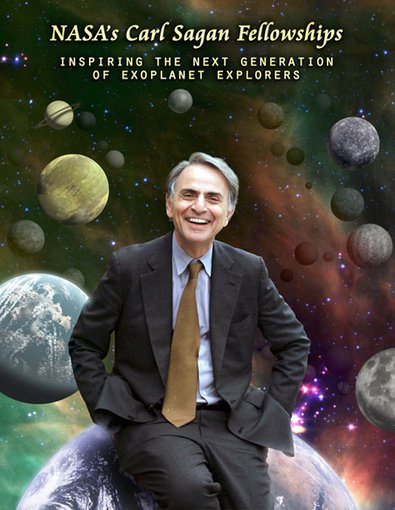 NASA announced Wednesday the new Carl Sagan Postdoctoral Fellowships in Exoplanet Exploration, created to inspire the next generation of explorers seeking to learn more about planets, and possibly life, around other stars.

Planets beyond our solar system, called exoplanets, are being discovered at a staggering pace, with more than 300 currently known. Decades ago, long before any exoplanets had been found, the late Carl Sagan imagined such worlds, and pioneered the scientific pursuit of life that might exist on them. Sagan was an astronomer and a highly successful science communicator.

NASA’s new Sagan fellowships will allow talented young scientists to tread the path laid out by Sagan. The program will award stipends of approximately $60,000 per year, for a period of up to three years, to selected postdoctoral scientists. Topics can range from techniques for detecting the glow of a dim planet in the blinding glare of its host star, to searching for the crucial ingredients of life in other planetary systems.

“We are investing in our nation’s best and brightest in an emerging field that is tremendously inspiring to the public,” said Jon Morse, Astrophysics Division director at NASA Headquarters in Washington.

“NASA’s science-driven mission portfolio, its cultivation of young talent to pursue cutting-edge research, and the decision to commit its genius to a question of transcendent cultural significance, would have thrilled Carl,” said Ann Druyan, Sagan’s widow and collaborator, who continues to write and produce.

“That this knowledge will be pursued in his name, as he joins a triumvirate of the leading lights of 20th century astronomy, is a
source of infinite pride to our family,” said Druyan. “It signifies that Carl’s passion to engage us all in the scientific experience, his daring curiosity and urgent concern for life on this planet, no longer eclipse his scientific achievements.”

A call for Sagan Fellowship proposals went out to the scientific community earlier this week, with selections to be announced in February 2009.

“There is an explosion of interest in the field,” said Charles
Beichman of NASA’s Jet Propulsion Laboratory in Pasadena, Calif. “Now we are going down a scientific path that Carl Sagan originally blazed, torch in hand, as he led us through the dark.” Beichman is executive director of NASA’s Exoplanet Science Institute at the California Institute of Technology in Pasadena, which will administer the fellowship program.

Recently, NASA’s Hubble and Spitzer space telescopes have made landmark observations of hot, Jupiter-like planets orbiting other stars. The telescopes detected methane and water in the planets’ atmospheres — the same molecules that might serve as tracers of life if discovered around smaller, rocky planets in the future. In a 1994 paper for the journal Nature, Sagan and colleagues used these and
other molecules to identify life on a planet — Earth. They used NASA’s Galileo spacecraft to observe the molecular signatures of our “pale blue dot,” as Sagan dubbed Earth, while the spacecraft flew by.

“Only a select few scientists carry the insight, vision and
persistence to open entire new vistas on the cosmos,” said Neil deGrasse Tyson, astrophysicist and Frederick P. Rose director of the Hayden Planetarium at the American Museum of Natural History in New York. “We know about Einstein. We know about Hubble. Add to this list Carl Sagan, who empowered us all — scientists as well as the public — to see planets not simply as cosmic objects but as worlds of their own that could harbor life.”

NASA’s Kepler mission, which Sagan championed in his last years, will launch next year and will survey hundreds of thousands of nearby stars for Earth-like worlds, some of which are likely to orbit within the star’s water-friendly “habitable zone” favorable for life as we know it.

More information about NASA’s Sagan Fellowships is available on the Web at: