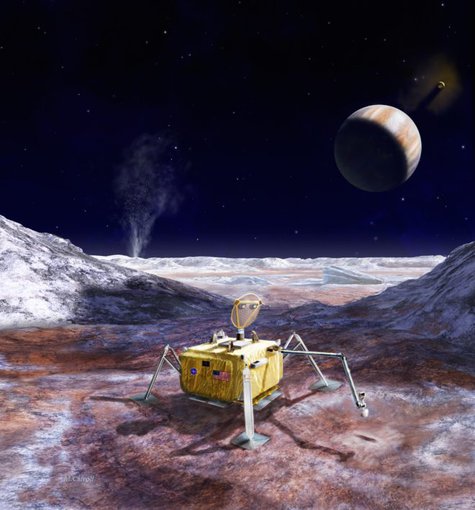 Artist rendering of a potential life-detecting lander mission to Europa that would follow on the Europa Clipper orbiter mission that is scheduled to launch in the 2020s. In the background is Jupiter. (NASA/JPL/Caltech)

It has been four long decades since NASA has sent an officially-designated life detection mission into space. The confused results of the Viking missions to Mars in the mid 1970s were so controversial and contradictory that scientists — or the agency at least — concluded that the knowledge needed to convincingly search for extraterrestrial life wasn’t available yet.

But now, a panel of scientists and engineers brought together by NASA has studied a proposal to send a lander to Jupiter’s moon Europa and, among other tasks, return to the effort of life-detection.

In their recommendation, in fact, the NASA-appointed Science Definition Team said that the primary goal of the mission would be “to search for evidence of life on Europa.”

The other goals are to assess the habitability of Europa by directly analyzing material from the surface, and to characterize the surface and subsurface to support future robotic exploration of Europa and its ocean.

Scientists agree that the evidence is quite strong that Europa, which is slightly smaller than Earth’s moon, has a global saltwater ocean beneath its deep ice crust, and that it contains twice as much water as exists on Earth.

For the ocean to be liquid there must be substantial sources of heat — from tidal heating based on the shape of its orbits, or from heat emanating from radioactive decay and entering the ocean through hydrothermal vents. All could potentially provide an environment where life could emerge and survive.

Kevin Hand of the Jet Propulsion Laboratory is a specialist in icy worlds and is deputy project scientist for the Europa project. He was one of the co-chairs of the Science Definition Team (SDT) and he said the group was ever mindful of the complicated history of the Viking missions. He said that some people called Viking a “failure” because it did not clearly identify life, but he described that view as “entirely unscientific.”

“It would be misguided to set out to ‘find life’,” he told me. “The real objective is to test an hypothesis – one we have that if you bring together the conditions for life as we know them, then they might come together and life can inhabit the environment.

“As far as we can tell, Europa has the water, the elements and the energy needed to create a habitable world. If the origin of life involves some relatively easy processes, then it just might be there on Europa.”