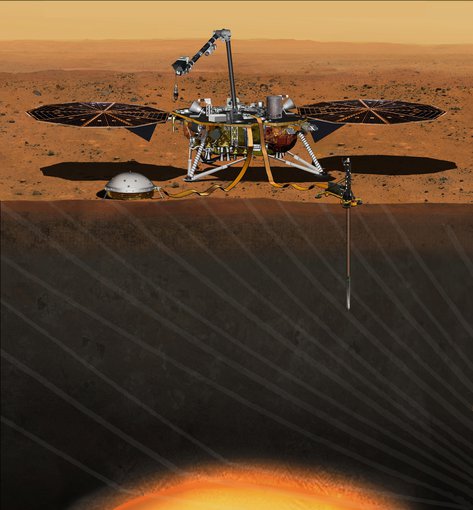 NASA has set a new launch opportunity, beginning May 5, 2018, for the InSight mission to Mars. This artist's concept depicts the InSight lander on Mars after the lander's robotic arm has deployed a seismometer and a heat probe directly onto the ground. InSight is the first mission dedicated to investigating the deep interior of Mars. The findings will advance understanding of how all rocky planets, including Earth, formed and evolved. Credits: NASA/JPL-Caltech

NASA is moving forward with a spring 2018 launch of its InSight mission to study the deep interior of Mars, following final approval this week by the agency’s Science Mission Directorate.

The Interior Exploration using Seismic Investigations, Geodesy and Heat Transport (InSight) mission was originally scheduled to launch in March of this year, but NASA suspended launch preparations in December due to a vacuum leak in its prime science instrument, the Seismic Experiment for Interior Structure (SEIS).

The new launch period for the mission begins May 5, 2018, with a Mars landing scheduled for Nov. 26, 2018. The next launch opportunity is driven by orbital dynamics, so 2018 is the soonest the lander can be on its way.

“Our robotic scientific explorers such as InSight are paving the way toward an ambitious journey to send humans to the Red Planet,” said Geoff Yoder, acting associate administrator for NASA’s Science Mission Directorate, in Washington. “It’s gratifying that we are moving forward with this important mission to help us better understand the origins of Mars and all the rocky planets, including Earth.”

The SEIS instrument — designed to measure ground movements as small as half the radius of a hydrogen atom — requires a perfect vacuum seal around its three main sensors in order to withstand harsh conditions on the Red Planet. Under what’s known as the mission “replan,” NASA’s Jet Propulsion Laboratory in Pasadena, California, will be responsible for redesigning, developing and qualifying the instrument’s evacuated container and the electrical feedthroughs that failed previously. France’s space agency, the Centre National d’Études Spatiales (CNES), will focus on developing and delivering the key sensors for SEIS, integration of the sensors into the container, and the final integration of the instrument onto the spacecraft.

NASA’s budget for InSight was $675 million. The instrument redesign and two-year delay add $153.8 million. The additional cost will not delay or cancel any current missions, though there may be fewer opportunities for new missions in future years, from fiscal years 2017-2020.

InSight’s primary goal is to help us understand how rocky planets formed and evolved. Jim Green, director of NASA’s Planetary Science Division, said, “We’ve concluded that a replanned InSight mission for launch in 2018 is the best approach to fulfill these long-sought, high-priority science objectives.”

CNES President Jean-Yves Le Gall added, “This confirmation of the launch plan for InSight is excellent news and an unparalleled opportunity to learn more about the internal structure of the Red Planet, which is currently of major interest to the international science community.”