Most Planets Are Colder Than Thought 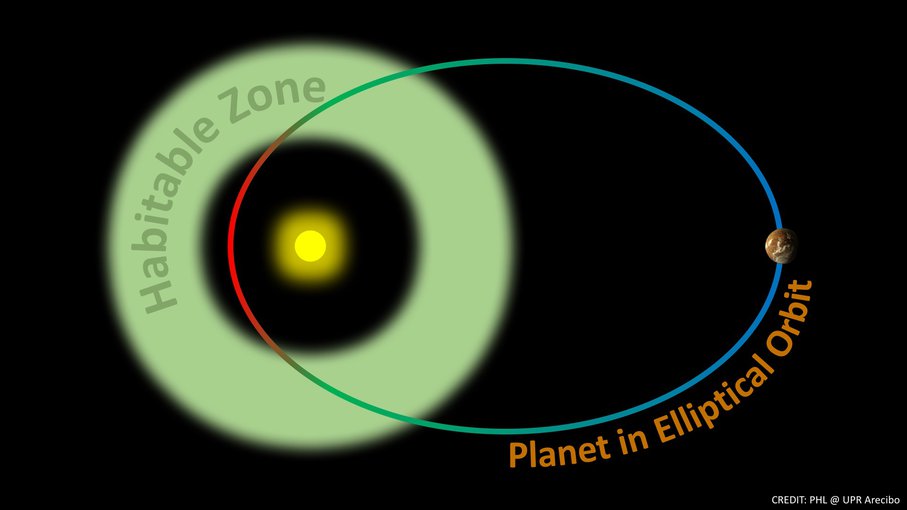 There Might be More Planets in the Habitable Zone

A common assumption in the search for habitable abodes beyond Earth is that the average temperature of planets always increases the more elliptical their orbit is. Now, scientists from the Planetary Habitability Laboratory (PHL) and the Arecibo Observatory in Puerto Rico have shown that planets in elliptical orbits are generally colder than previously believed.

Planets can move around their parent star in orbits that are not perfectly circular. These elliptical orbits put planets sometimes significantly closer or farther from their star, thus contributing to extreme temperature changes. This is not the case of Earth, and probably for the exoplanets orbiting the stars Proxima Centauri or TRAPPIST-1, but true for many known planets around other stars.

In the past, scientists assumed the average equilibrium temperature of a planet would increase with eccentricity because the average energy received from its star, the stellar flux, also increases with eccentricity. A new study, published in the Astrophysical Journal Letters, provides a new model that shows this is not always the case.

“A change in stellar flux does not translate accordingly to a change of temperature along elliptical orbits”, says Abel Méndez, a Planetary Astrobiologist from the PHL at the University of Puerto Rico at Arecibo and lead author of the study.

“We discovered this orbital cooling effect when we were not able to match the numerical models of our Habitable Exoplanet Catalog with current analytical models, so we derived a new analytical model that explains it,” says Méndez.

“If we followed some of the previous models, Mars, which is a planet with an eccentric orbit, should have an equilibrium temperature of -43 °C” , noted Edgard Rivera-Valentín, a Planetary Scientists at the Arecibo Observatory with the Universities Space Research Association and co-author of the study, “Now we’re getting -63 °C, which matches what we’ve observed.”

Hints to the orbital cooling effect described by Méndez & Rivera-Valentín appeared first in climate simulations of Earth-like planets in eccentric orbits. “Now we know that this is a universal effect not only caused by changes on the planet’s albedo, its ability to reflect stellar radiation,” says Méndez.

The study also suggests a new method to determine whether planets in elliptical orbits are within the habitable zone, the region around a star where rocky planets could support surface liquid water. This might have an impact on the number of planets considered potentially habitable, especially those initially considered too hot for life.

The effect described in the study is negligible for planets in nearly circular orbits, but strong enough to reevaluate the habitability of those in very elliptical orbits such as the planets of the red-dwarf star Wolf 1061 or even potential exomoons around warm jupiters.