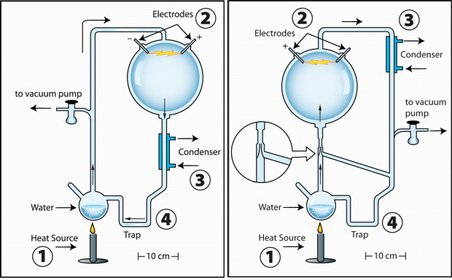 Members of NAI’s Carnegie Institution of Washington, Indiana University, and NASA Goddard Space Flight Center Teams and their colleagues have revisited the Miller-Urey experiments, and found some surprising results.

A classic experiment proving amino acids are created when inorganic molecules are exposed to electricity isn’t the whole story, it turns out. The 1953 Miller-Urey Synthesis had two sibling studies, neither of which was published. Vials containing the products from those experiments were recently recovered and reanalyzed using modern technology. The results are reported in this week’s Science.

One of the unpublished experiments by American chemist Stanley Miller (under his University of Chicago mentor, Nobelist Harold Urey) actually produced a wider variety of organic molecules than the experiment that made Miller famous. The difference between the two experiments is small — the unpublished experiment used a tapering glass “aspirator” that simply increased air flow through a hollow, air-tight glass device. Increased air flow creates a more dynamic reaction vessel, or “vapor-rich volcanic” conditions, according to the present report’s authors.

“The apparatus Stanley Miller paid the least attention to gave the most exciting results,” said Adam Johnson, lead author of the Science report. “We suspect part of the reason for this was that he did not have the analytical tools we have today, so he would have missed a lot.”

Johnson is a doctoral student in IU Bloomington’s Biochemistry Program. His advisor is biogeochemist Lisa Pratt, professor of geological sciences and the director of NASA’s Indiana-Princeton-Tennessee Astrobiology team.

In his May 15, 1953, article in Science, “A Production of Amino Acids Under Possible Primitive Earth Conditions,” Miller identified just five amino acids: aspartic acid, glycine, alpha-amino-butyric acid, and two versions of alanine. Aspartic acid, glycine and alanine are common constituents of natural proteins. Miller relied on a blotting technique to identify the organic molecules he’d created — primitive laboratory conditions by today’s standards. In a 1955 Journal of the American Chemical Society paper, Miller identified other compounds, such as carboxylic and hydroxy acids. But he would not have been able to identify anything present at very low levels.

“We believed there was more to be learned from Miller’s original experiment,” Bada said. “We found that in comparison to his design everyone is familiar with from textbooks, the volcanic apparatus produces a wider variety of compounds.”

Johnson added, “Many of these other amino acids have hydroxyl groups attached to them, meaning they’d be more reactive and more likely to create totally new molecules, given enough time.”

The results of the revisited experiment delight but also perplex.

A possible answer to the first question may be the increased flow rate itself, Johnson explained. “Removing newly formed molecules from the spark by increasing flow rate seems crucial,” he said. “It’s possible the jet of steam pushes newly synthesized molecules out of the spark discharge before additional reactions turn them into something less interesting. Another thought is that simply having more water present in the reaction allows a wider variety of reactions to occur.”

An answer to the second question is relegated to speculation — Miller, still a hero to many scientists, succumbed to a weak heart in 2007. Johnson says he and Bada suspect Miller wasn’t impressed with the experiment two’s results, instead opting to report the results of a simpler experiment to the editors at Science.

Miller’s third, also unpublished, experiment used an apparatus that had an aspirator but used a “silent” discharge. This third device appears to have produced a lower diversity of organic molecules.

Research on early planetary geochemistry and the origins of life isn’t limited to Earth studies. As humans explore the Solar System, investigations of past or present extra-terrestrial life are inevitable. Recent speculations have centered on Mars, whose polar areas are now known to possess water ice, but other candidates include Jupiter’s moon Europa and Saturn’s moon Enceladus, both of which are covered in water ice. The NASA Astrobiology Institute, which supports these investigations, has taken a keen interest in the revisiting of the Miller-Urey Synthesis.

“This research is both a link to the experimental foundations of astrobiology as well as an exciting result leading toward greater understanding of how life might have arisen on Earth,” said Carl Pilcher, director of the NASA Astrobiology Institute, headquartered at NASA Ames Research Center in Mountain View, Calif.

Scripps Institution of Oceanography is a research center of the University of California at San Diego.

The NASA Astrobiology Institute (NAI), founded in 1998, is a partnership among NASA, 16 U.S. teams and five international consortia. NAI’s goal is to promote, conduct and lead interdisciplinary astrobiology research and to train a new generation of astrobiology researchers. For more information, see http://astrobiology.nasa.gov/nai.