About Image
An artist’s impression of what Mars might have looked like with water, when any potential Martian microbes would have evolved.Credit: ESO/M. Kornmesser
Jan. 18, 2017
Research Highlight

Extremely low atmospheric pressures not a game changer for life.

Microbes that rank among the simplest and most ancient organisms on Earth could survive the extremely thin air of Mars, a new study finds.

The martian surface is presently cold and dry, but there is plenty of evidence suggesting that rivers, lakes and seas covered the Red Planet billions of years ago. Since there is life virtually wherever there is liquid water on Earth, scientists have suggested that life might have evolved on Mars when it was wet, and life could be there even now.

“In all the environments we find here on Earth, there is some sort of microorganism in almost all of them,” said Rebecca Mickol, an astrobiologist at the Arkansas Center for Space and Planetary Sciences at the University of Arkansas in Fayetteville, and the lead author of the study. “It’s hard to believe there aren’t other organisms out there on other planets or moons as well.”

Mickol and her team detailed their findings in the paper, “Low Pressure Tolerance by Methanogens in an Aqueous Environment: Implications for Subsurface Life on Mars,” which was published in the journal Origins of Life and Evolution of Biospheres.

An artist’s impression of what Mars might have looked like with water, when any potential Martian microbes would have evolved.Image credit: ESO/M. Kornmesser.

Previous research detected methane, the simplest organic molecule, in the martian atmosphere. While there are abiotic ways to produce methane — such as volcanic activity — much of this colorless, odorless, flammable gas in Earth’s atmosphere is produced by life, such as cattle digesting food.

“One of the exciting moments for me was the detection of methane in the martian atmosphere,” Mickol said. “On Earth, most methane is produced biologically by past or present organisms. The same could possibly be true for Mars. Of course, there are a lot of possible alternatives to the methane on Mars and it is still considered controversial. But that just adds to the excitement.”

On Earth, microbes known as methanogens produce methane, also known as natural gas. Methanogens typically live in swamps and marshes, but can also be found in the guts of cattle, termites and other herbivores, as well as in dead and decaying organic matter.

Methanogens are among the simplest and most ancient organisms on Earth. These microorganisms are anaerobes, meaning they do not require oxygen. Instead, they often rely on hydrogen for energy, and carbon dioxide is the main source of carbon atoms they use in creating organic molecules.

The fact that methanogens neither require oxygen nor photosynthesis means they could live just beneath the martian surface, shielded from harsh levels of ultraviolet radiation on the Red Planet. This could make them ideal candidates for life on Mars.

To see if methanogens might survive such extremely thin air, Mickol and Timothy Kral, the senior author of the study and an astrobiologist at the University of Arkansas at Fayetteville, experimented with four species of methanogens. They included: Methanothermobacter wolfeii, Methanosarcina barkeri, Methanobacterium formicicum, and Methanococcus maripaludis. Previous experiments on these four species over the course of more than 20 years generated a lot of data on these organisms and their rates of survival in simulated martian conditions. 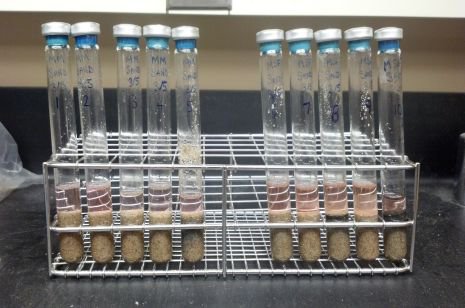 The more recent set of experiments, which took about a year, involved growing the microbes in test tubes within liquids as a proxy for the fluids potentially flowing through underground martian aquifers. The microbes were fed hydrogen gas, and the liquids were covered with cotton swabs, which in turn were covered with dirt simulating what might be found on the martian surface. The insides of each test tube were then subjected to low pressures.

Oxygen kills these methanogens, and maintaining a low-pressure, oxygen-free environment “was a difficult task,” Mickol said. Moreover, water evaporates quickly at low pressure, which can limit how long the experiments can last and can also clog the vacuum system with water.

Despite these problems, the researchers found that these methanogens all survived exposure of lengths varying from 3 to 21 days at pressures down to roughly six-thousandths of Earth’s surface pressure. “These experiments show that for some species, low pressure may not really have any effect on the survival of the organism,” Mickol said. 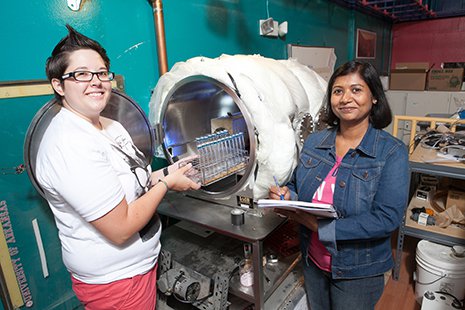 The scientists are also measuring methane to see whether methanogens are actively growing at low pressure and producing methane.

“The next step is to also include temperature,” Mickol said. “Mars is very, very cold, often getting down to -100ºC (-212ºF) at night, and sometimes, on the warmest day of the year, at noon, the temperature can rise above freezing. We’d run our experiments just above freezing, but the cold temperature would limit evaporation of the liquid media and it would create a more Mars-like environment.”

Mickol stressed that these experiments do not prove life exists on other planets. “That being said, with the abundance of life on Earth, in all the different extremes of environments found here, it’s quite possible there exists life — bacteria or tiny microorganisms — somewhere else in the Universe,” she said. “We’re just trying to explore that idea.”

This research was supported by the Exobiology & Evolutionary Biology element of the NASAAstrobiology Program.