About Image
Has NASA’s Curiosity rover taken dormant microbes to Mars?NASA/JPL–Caltech/MSSS
This computer-generated view based on multiple orbital observations shows Mars' Gale crater as if seen from an aircraft north of the crater.NASA/JPL-Caltech/ASU/UA
June 25, 2019
Feature Story

The presence — and absence — of methane gas on Mars has been both very intriguing and very confusing for years. And news coming out last week and then on Monday adds to this scientific mystery.

To the great surprise of the Curiosity rover team, their Sample Analysis on Mars instrument sent back a measurement of 21 parts per billion of methane on Thursday — by far the highest measurement since the rover landed at Gale Crater.

As Paul Mahaffy, principal investigator of the instrument that made the measurement, described it yesterday at a large astrobiology conference in Seattle, “We were dumbfounded.”

And then a few days later, all the methane was gone. Mahaffy, and NASA headquarters, reported that the readings went down quickly to below 1 part per billion. 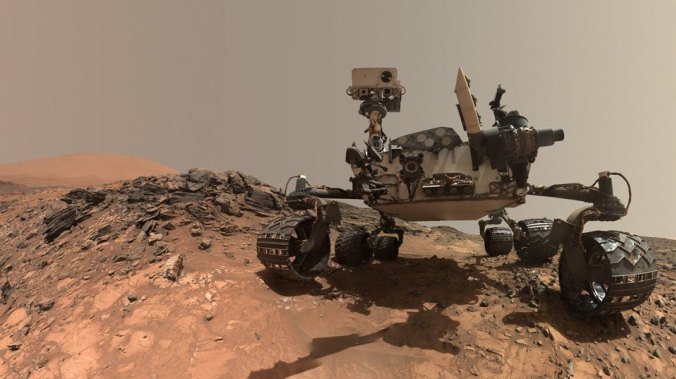 On the 2,440th Martian day at Gale Crater, Curiosity detected a large spike in the presence of the gas methane. It was by far the largest plume detected by the rover, and parallels an earlier ground-based discovery of an even larger plume of the gas.Image credit: NASA, JPL-Caltech, MSSS.

These perplexing findings are especially important because methane could — and also could not — be a byproduct of biology. On Earth, more than 90 percent of methane is produced via biology. On Mars — at this point, nobody knows. But the question has certainly gotten scientists’ attention.

The most recent finding of a return to low methane levels suggests that last week’s methane detection was one of the transient methane plumes that have been observed in the past. While Curiosity scientists have noted background levels rise and fall seasonally, they haven’t found a pattern in the occurrence of these transient plumes.

“The methane mystery continues,” said Ashwin Vasavada, Curiosity’s project scientist at NASA’s Jet Propulsion Laboratory in Pasadena, California. “We’re more motivated than ever to keep measuring and put our brains together to figure out how methane behaves in the Martian atmosphere.” 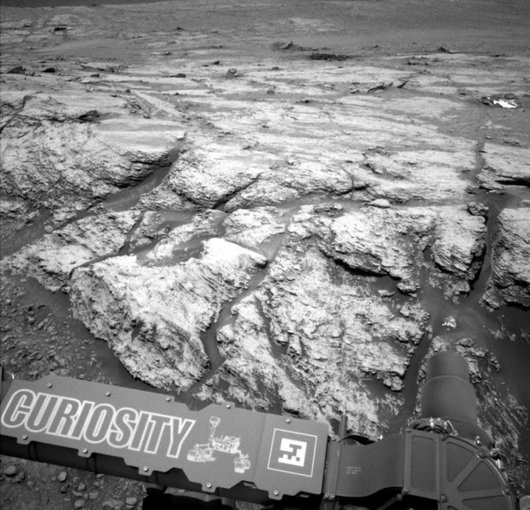 This image was taken by the left Navcam on the Curiosity Mars rover on June 18, 2019, the day when a methane plume was detected. It shows part of “Teal Ridge,” which the rover has been studying within a region called the “clay-bearing unit.”Image credit: NASA/JPL-Caltech.

The nature and size of this most recent methane plume will, by chance, be the most widely observed so far.

That’s because the Mars Express orbiter happened to be performing spot tracking observations at the Gale Crater right around the time Curiosity detected the methane spike. As a result, the instruments onboard would have taken hundreds of measurements during its brief time over Gale, allowing for the creation of averages that can provide a more accurate picture of what was happening in the atmosphere.

In this case, the Mars Express orbiter was doing spot tracking 20 hours before Curiosity’s methane detection, as well as 24 and 48 hours after the detection.

Again as luck would have it, the ExoMars Trace Gas Orbiter also was performing atmospheric observations at around the same time as Mars Express and in the same place, but at a higher latitude. Together they could give invaluable additional information to the Curiosity scientists, particularly since some have hypothesized that the methane is diluted or destroyed as it rises in the atmosphere.

While scientists can only theorize now about the source of the methane, most agree that it comes from deep underground during warmer summertime months.

The modern methane-on-Mars story took off in 2009 when NASA’s Michael Mumma and Geronimo Villanueva identified a huge methane plume while using a ground-based telescope.

Because of the connection between methane and biology on Earth, the news got great prominence and stirred some controversy. Those concentrations were 45 parts per billion — above the 21 bbp found at Gale Crater — and were quite widespread in the Nili Fossae area of Mars. It was all very tantalizing.

Years of efforts to replicate that identification of a giant methane release, however, have been unsuccessful. The European Trace Gas Orbiter has not found methane since it arrived at Mars, and ground-based efforts have also come up empty-handed. While Curiosity has in recent years gotten enhanced methane-detecting capabilities, it has found those minor and seasonal background levels but nothing like the earlier giant plume — until last week.

NASA’s Mahaffy said that the Curiosity team will be crunching the numbers from Curiosity, Mars Express and the Trace Gas Orbiter in the days ahead. Perhaps they’ll be able to understand better the nature of the methane plumes, and why they appear and then quickly disappear.

But what they won’t be able to do is determine whether the methane comes from biological or abiotic sources. That’s a job for different instruments and future missions.