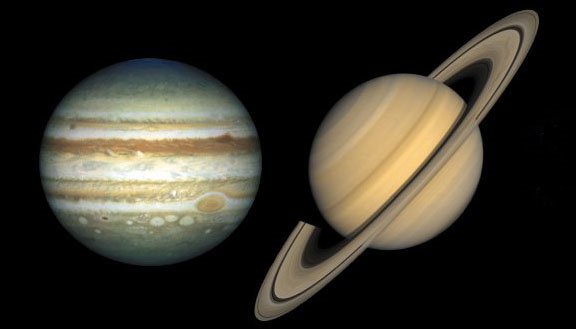 Astronomers believe planets like Jupiter shield us from space objects that would otherwise slam into Earth. Now they’re closer to learning whether giant planets act as guardians of solar systems elsewhere in the galaxy.

A UCR-led team has discovered two Jupiter-sized planets about 150 light years away from Earth that could reveal whether life is likely on the smaller planets in other solar systems.

“We believe planets like Jupiter have profoundly impacted the progression of life on Earth. Without them, humans might not be here to have this conversation,” said Stephen Kane, lead study author and UCR associate professor of planetary astrophysics. “Understanding how many other stars have planets like Jupiter could be very important for learning about the habitability of planets in those systems.”

Along with liquid water oceans, Kane said astronomers believe such planets have the ability to act as ‘slingshots,’ pulling objects like meteors, comets, and asteroids out of their trajectories en route to impact with small, rocky planets.

Many larger planets have been found close to their stars. However, those aren’t as useful for learning about the architecture of our own solar system, where the giant planets including Saturn, Uranus and Neptune are all farther from the sun. Big planets far from their stars have, until now, been harder to find.

A study recently published in the Astronomical Journal details how Kane’s team found success in a novel approach combining traditional detection methods with the latest technologies.

Click here to read the full press release from the University of California at Riverside.

The study, “Detection of Planetary and Stellar Companions to Neighboring Stars via a Combination of Radial Velocity and Direct Imaging Techniques,” was published in the Astronomical Journal. The work was supported by the Nexus for Exoplanet System Science (NExSS).  NExSS is a NASA  research coordination network supported in part by the  NASA Astrobiology Program. This program element is shared between NASA’s Planetary Science Division (PSD) and the Astrophysics Division.