Messy Chemistry: A New Way to Approach the Origins of Life 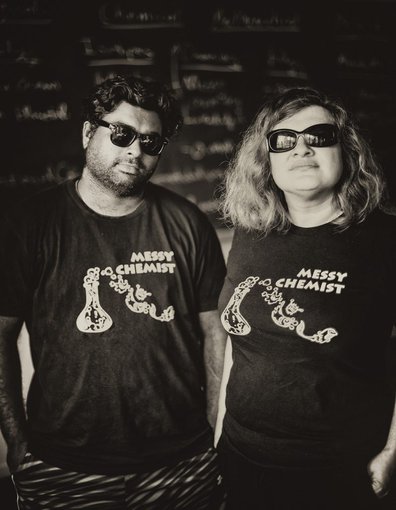 prebiotic chemist Kuhan Chandru and astrobiologist and chemist Irena Mamajanov in their messy chemistry garb at the Earth-Life Science Institute (ELSI) in Tokyo. Mamajanov leads an effort at the institute to study a new “messy” path to understanding how some prebiotic chemical systems led to building blocks of life on early Earth. (Nerissa Escanlar)

More than a half century ago, Stanley Miller and Harold Urey famously put water and gases believed to make up the atmosphere of early Earth into a flask with water, sparked the mix with an electric charge, and produced amino acids and other chemical building blocks of life.

The experiment was hailed as a ground-breaking reproduction of how the essential components of life may have been formed, or at least a proof of concept that important building blocks of life could be formed from more simple components.

Little discussed by anyone outside the origins of life scientific community was that the experiment also produced a lot of a dark, sticky substance, a gooey tar that covered the beaker’s insides. It was dismissed as largely unimportant and regrettable then, and in the thousands of parallel origins of life experiments that followed.

Today, however, some intrepid researchers are looking at the tarry residue in a different light.

Just maybe, they argue, the tar was equally if not more important as those prized amino acids (which, after all, were hidden away in the tar until they were extracted out). Maybe the messy tar – produced by the interaction of organic compounds and an energy source — offers a pathway forward in a field that has produced many advances but ultimately no breakthrough.

Those now studying the tar call their research “messy chemistry,” as opposed to the “clean” chemistry that focused on the acclaimed organic compounds.

There are other centers where different versions of “messy chemistry” research are under way — including George Cody’s lab at the Carnegie Institution for Sciences and Nicholas Hud’s at the Georgia Institute of Technology — but it is probably most concentrated at the Earth-Life Science Institute in Tokyo (ELSI.)

There, messy chemistry is viewed as an ignored but promising way forward, and almost a call to arms.

“In classical origin-of-life synthetic chemistry and biology you’re looking at one reaction and analyzing its maximum result. It’s A+B = C+D,” said Irena Mamajanov, an astrobiologist with a background in chemistry who is now a principal investigator ELSI and head of the overall messy chemistry project.

“But life is not like that; it isn’t any single reaction. They’re looking at a subset of reactions and we ask: ‘Why not look at the whole complex system?’”