Scientists supported by the NASA Astrobiology Program have developed a new theory concerning the cause of landslides on Mars. Spacecraft orbiting Mars have spotted seasonal flow features on the surface of the planet that have been referred to as Recurring Slope Lineae (RSL). Since their discovery, these features have intrigued scientists but the mechanisms behind their formation have yet to be explained.

A team of researchers from the SETI Institute recently proposed that RSL could be caused when near-surface ice in the Martian regolith melts. This melting allows regolith material to be shifted by dust storms and wind. If correct, the theory could have important implications for understanding surface chemistry on Mars today.

The study, “Martian subsurface cryosalt expansion and collapse as trigger for landslides,” was recently published in the journal Science Advances.

Click here to read a full press release from the SETI Institute. 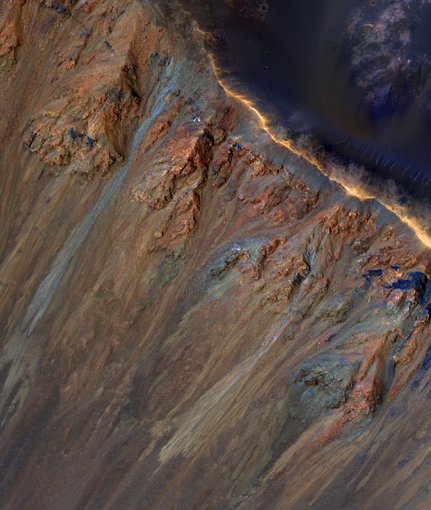 HiRISE camera view of Krupac crater on Mars featuring gullies along the rim and RSL lower down the crater wall.Image credit: NASA/JPL/University of Arizona.