Home

News

Bringing Back a Piece of ...

About Image
As part of a Mars sample return mission, a rocket will carry a container of sample tubes with martian rock and soil samples into orbit around Mars and release it for pick up by another spacecraft. This illustration shows a concept for a Mars Ascent Vehicle (left) releasing a sample container (right) high above the Martian surface.NASA/JPL-Caltech
This illustration shows a concept of what a rover fetching rock and soil samples on Mars for return to Earth could look like. The sample tube in this image would have been left on the surface by a previous mission, NASA's Perseverance rover.NASA/JPL-Caltech
Oct. 11, 2020
Feature Story

Bringing Back a Piece of Mars

Generations of planetary scientists have wanted to bring samples of Mars back to Earth to answer a wide variety of scientific questions. But with so much enthusiasm about a human mission to Mars, it might seem like a great idea to skip sending a rover to collect samples, and jump right to putting human boots on the red planet.

But digging into the science, there’s a laundry list of reasons why we are sending rovers to collect more information still makes sense, say experts, including NASA’s own Planetary System Decadal Survey published in 2011. In fact, a preceding sample return mission is key to a human mission, for a number of reasons. Here’s why. 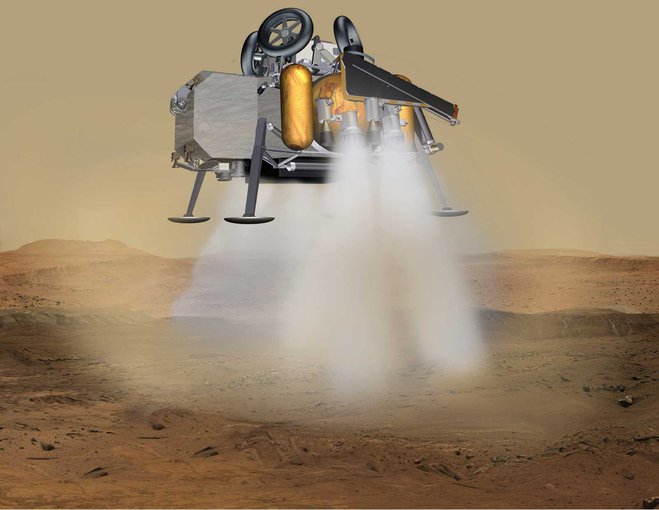 In this illustration of a Mars sample return mission concept, a lander carrying a fetch rover touches down on the surface of Mars.Image credit: NASA/JPL-Caltech.

Importantly, humans who go to Mars will have to land on the surface, stay there for some time until a launch window opens up, and then rocket back off the planet. All of those variables need to be tested before human lives are on the line, and a return mission will put new technology to the test: “Mars Sample Return (MSR) will demonstrate the ability to land heavier spacecraft on the Martian surface, advance precision-landing technology—like Terrain Relative Navigation—necessary for safely landing humans and equipment on Mars, and be the first demonstration of launching a rocket from the martian surface, necessary for returning humans safely back to Earth,” says Jim Watzin, NASA’s former Mars Exploration Program Director.

When humans do go to Mars, they will be spending time on the planet, so it’s vitally important to know what we’re getting into. “There are a whole variety of really significant health issues to consider,” says Dawn Sumner, a professor of astrobiology at the University of California, Davis, who is also a member of NASA’s Mars Science Laboratory (MSL) helping the Curiosity rover explore Gale Crater. To start with, biohazards and toxic materials could be present.

Martian dust may be hazardous to humans. Understanding the composition of the dust, as well as its reactivity is crucial. “Based on the MSL results, there’s a lot of amorphous materials on Mars— these…materials, particularly when they’ve been exposed to radiation, are chemically very reactive,” says Sumner.

Martian soil is high in iron, giving Mars its red color, and if that iron gets into humans, our bodies do not know how to get rid of it. Iron overdose can cause a range of health issues including cancers and organ failures. Determining the composition of that material will allow scientists to know how big a health hazard they might be.

“One key will be the availability of water for drinking and (if abundant enough) sustaining plants in greenhouses; local production of hydrogen and oxygen for spacecraft fuel and power production by fuel cells may also be possible,” says Steven Lee, planetary scientist and program content specialist at the Denver Museum of Nature and Science. “Fully characterizing the surface materials will also help with designing processes to fabricate building materials and radiation shields from the available resources,” says Lee.

On top of understanding Mars better via sample return, it will also be useful to practice a little closer to home before attempting a 3-year roundtrip Mars mission. NASA’s Artemis mission aims to send astronauts to areas of Earth’s moon not yet explored—and to try out living and operating on a non-Earth location.

“Exploring new areas of the lunar surface will allow for astronauts to find and use water and other critical resources needed for long-term exploration, as well as prove the technologies needed before sending astronauts on missions to Mars,” says Watzin.

While we want to ensure it’s safe for people to go to Mars, we also want to be sure to protect Mars from us—planetary protection is an important goal that will be easier to achieve once we understand what might exist or existed in the past on Mars.

“Having pristine samples prior to ‘boots on Mars’ ensures the biological potential of the sampled areas can be investigated without the chance of contamination by the presence of human crews on the surface,” says Lee. 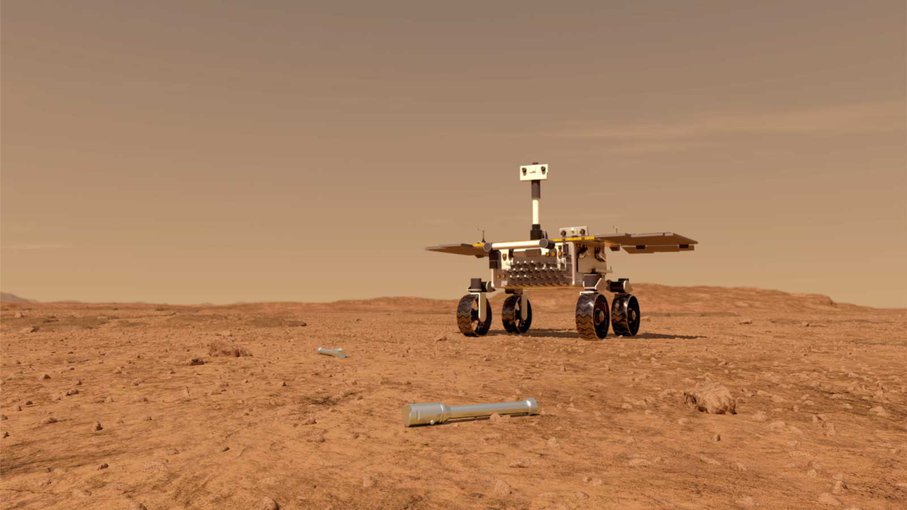 This illustration shows a concept of what a rover fetching rock and soil samples on Mars for return to Earth could look like. The sample tube in this image would have been left on the surface by a previous mission, NASA's Perseverance rover.Image credit: NASA/JPL-Caltech.

Current and Past Life on Mars

The question of life on Mars (including past life) is a huge one—and that’s a core science priority of Mars Sample Return, according to a 2008 paper on the subject: That means looking for “evidence for prebiotic processes, past life, and extant life on Mars by characterizing the signatures of these phenomena in the form of structure/morphology, biominerals, organic molecular and isotopic compositions, and other evidence,” according to the paper.

Right now, Sumner says, “We cannot analyze the organic matter in a way that tells us whether that matter comes from life or abiotic processes. If we had samples from those rocks back on Earth, we would learn a huge amount about whether they might come from life—and even if they aren’t from life, we could learn how an organic matter behaves on another planetary surface to help us understand and improve models for the origin of life.”

Why can’t rovers on the Mars surface do these kinds of tests, rather than return those samples back to Earth? The complexity of the tests is high: These tests involve processing samples with liquids, analyzing the results and then immediately adapting the next analysis to those results. “That’s something we can do on Earth with decades of time and well-curated samples, but there’s not a way to do that on another planet,” says Sumner. 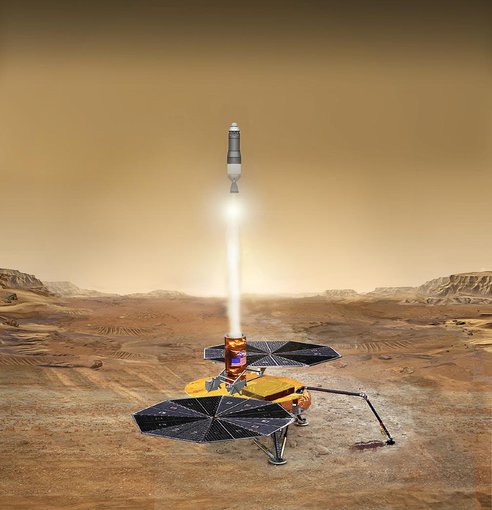 Mars Sample Return is a proposed mission to return samples from the surface of Mars to Earth.Image credit: NASA.

Why Can’t Meteorites Fill Us In?

Why can’t we get all this information from some of the samples that have landed here from Mars already—Martian meteorites? The samples we have so far just aren’t great at answering some of the questions we have: “The meteorites we have are the wrong type of rock—they are the kind of rock that can survive an impact, be shot up into space and maintain their coherence,” says Sumner.

Meteorites that have fallen to Earth from Mars aren’t able to tell us much—they’re the toughest rock, the kind that form deep within the planet or inside a volcano, so they don’t contain the information about potential life on Mars, which could come from rock that would have interacted with it. 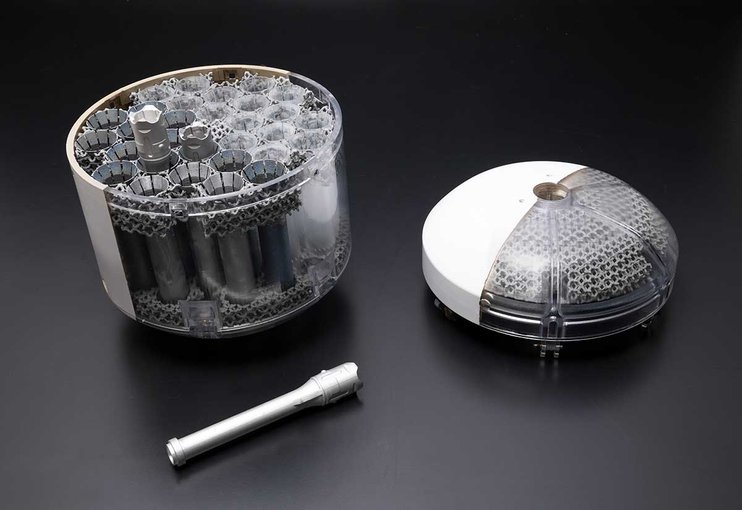 A concept model of NASA's orbiting sample container, which will hold tubes of Martian rock and soil samples that will be returned to Earth through a Mars sample return campaign. At right is the lid; bottom left sits a model of the sample-holding tube.Image credit: NASA/JPL-Caltech.

It’s Not All Rocks

There is, as on Earth, a large variety of rock types formed by a variety of martian processes, like volcanism or sedimentary processes, many of which will be obvious to geologists as they have Earthly analogs. Some rocks formed by ancient processes might be novel. And a sample-return mission would include collecting information from sources beyond the regolith or beneath the surface.

Samples of atmospheric gas would tell scientists about not only what elements the atmosphere is composed of, but which processes affected its origins and how it changed over time. Knowing how much of trace organic gases like methane and ethane there might be, or if they were available at higher quantities in some areas versus others would be important to understand both how they could be used by a human mission, and for thinking about a “potential martian biosphere.”

Similarly, testing polar ices could provide scientists the evidence they need to understand how water has cycled on the planet and show how the atmosphere of Mars interacts with the surface, leading to useful information about climate changes over time on the planet.

“A Mars Sample Return mission is built on a foundation of decades of prior studies”, says Watzin. But we’re ready, he says, “NASA’s investments in developing autonomous robots and landing large payloads on Mars have laid the groundwork for a successful sample return campaign.”

Mortal risk is inherent to a human-led Mars mission, so preparing as fully as possible before we put astronauts in that position will set it up for success. To go where no human has gone before, it would be useful to sample the water before diving in, or in this case, the red dust. 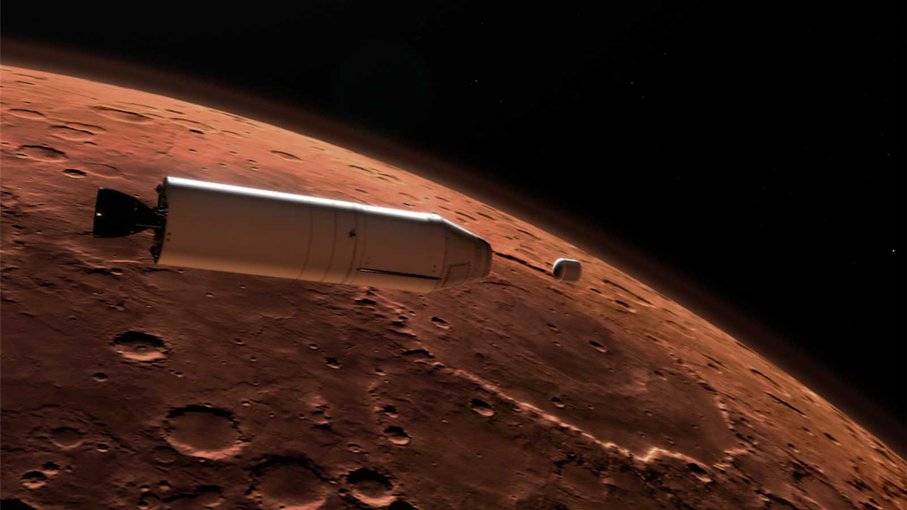 This illustration shows a concept for a Mars Ascent Vehicle (left) releasing a sample container (right) high above the Martian surface. A rocket will carry a container of sample tubes with martian rock and soil samples into orbit around Mars and release iImage credit: NASA/JPL-Caltech.