Life Without the Sun 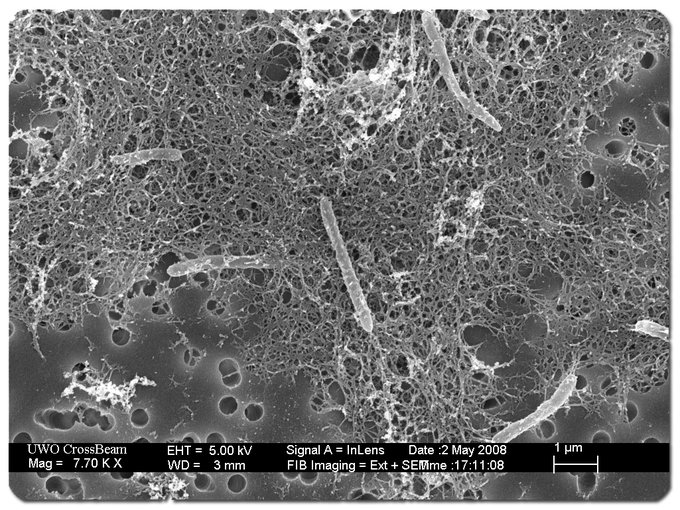 An ecosystem discovered 2.8 kilometers underground in the Mponeng Gold Mine near Johannesburg, South Africa two years ago has now been shown to comprise only a single species of microbe, existing on energy from radioactivity, completely independently of the Sun. The community of rod-shaped bacteria of the species Desulforudis audaxviator was discovered in 2005-06 by members of the NAI’s Indiana-Princeton-Tennessee Astrobiology Initiative (IPTAI) Team. Their current results are presented in the October 10th issue of Science.

Confirming earlier inferences, the new work shows that D. audaxviator’s metabolic processes are decoupled from the Sun and the photosynthetic biosphere. This ecosystem uses the energy of naturally occurring radioactivity to split water into hydrogen and hydrogen peroxide. The hydrogen peroxide reacts with naturally occurring sulfide in the rocks to make sulfate. The microbes then reduce the sulfate back to sulfide using electrons provided by the hydrogen left over from the splitting of water. This is the only ecosystem known to exist on an energy source other than light or chemical energy derived from the planet itself.

Genomic analyses have revealed that the organism’s genes code for everything needed to sustain an independent existence and reproduce, including the ability to fix its own nitrogen, move freely, sense its environment, protect itself from viruses, and even sporulate during nutrient-poor periods. It cannot, however, survive oxic conditions, suggesting it hasn’t been exposed to oxygen for a very long time.

Such a community could in principle live in the subsurface of any rocky planet, Mars for example. Radioactivity, sulfide minerals, water, N2 and carbon dioxide—the main things this community needs to survive—are almost certainly common in rocky planets everywhere.