About Image
ESA’s Mars Express has used radar signals bounced through underground layers of ice to identify a pond of water buried below the surface.ESA/NASA/JPL/ASI/Univ. Rome; R. Orosei et al 2018
This map shows the topography of the south polar region of Mars, including topography buried by thick deposits of icy material. The map is a combination of subsurface elevation data acquired by the Mars Advanced Radar for Subsurface and Ionospheric Sounding (MARSIS) aboard the European Space Agency’s Mars Express orbiter and surface elevation data acquired by the Mars Orbiter Laser Altimeter aboard NASA’s Mars Global Surveyor orbiter.NASA/JPL/ASI/ESA/Univ. of Rome/MOLA Science Team/USGS
July 25, 2018
Feature Story

A reservoir of what could be water has been spotted beneath the South Pole of Mars.

Far beneath the frigid surface of the South Pole of Mars is probably the last place where you might expect the first large body of martian liquid water would be found. It’s -170 F on the surface, there are no known geothermal sources that could warm the subterranean ice to make a meltwater lake, and the liquid water is calculated to be more than a mile below the surface.

Yet signs of that liquid water are what a team of Italian scientists detected — a finding that they say strongly suggests that there are other underground lakes and streams below the surface of Mars. In a Science journal article released today, the scientists described the subterranean lake they found as being about 20 kilometers in diameter. 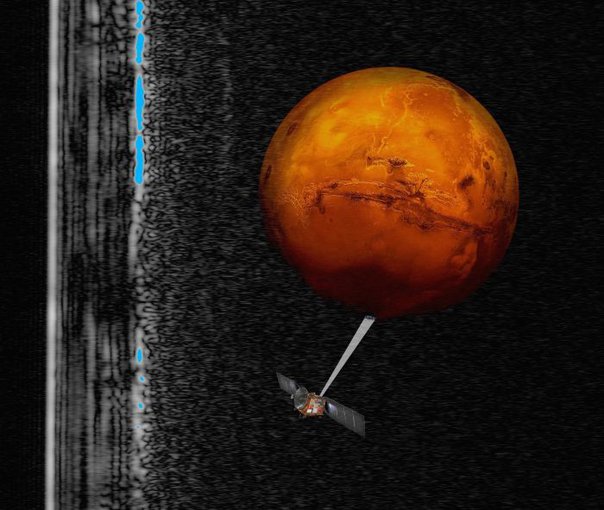 Artist impression of the Mars Express spacecraft probing the southern hemisphere of Mars, superimposed on a radar cross section of the southern polar layered deposits. The leftmost white line is the radar echo from the martian surface, while the light blue spots are highlighted radar echoes along the bottom of the ice. Those highlighted areas measure very high reflectivity, interpreted as being caused by the presence of water.Image credit: ESA, INAF. Graphic rendering by Davide Coero Borga.

The detection adds significantly to the long-studied and long-debated question of how much surface water was once on Mars, a subject that has major implications for the question of whether life ever existed on the planet.

Finding the subterranean lake points to not only a wetter early Mars, said co-author Enrico Flamini of the Italian space agency, but also to a Mars that had a water cycle that collected and delivered the liquid water. That would mean the presence of clouds, rain, evaporation, rivers, lakes and water to seep through surface cracks and pool underground.

Scientists have found many fossil waterways on Mars, minerals that can only be formed in the presence of water, and what might be the site of an ancient ocean.

But in terms of liquid water now on the planet, the record is thin. Drops of water collected on the leg of NASA’s Phoenix Lander after it touched down in 2008, and what some have described as briny water appears to be flowing down some steep slopes in summertime. Called recurrent slope lineae or RSLs, they appear at numerous locations when the temperatures rise and disappear when they drop.

This lake is different, however, and its detection is a major step forward in understanding the history of Mars. 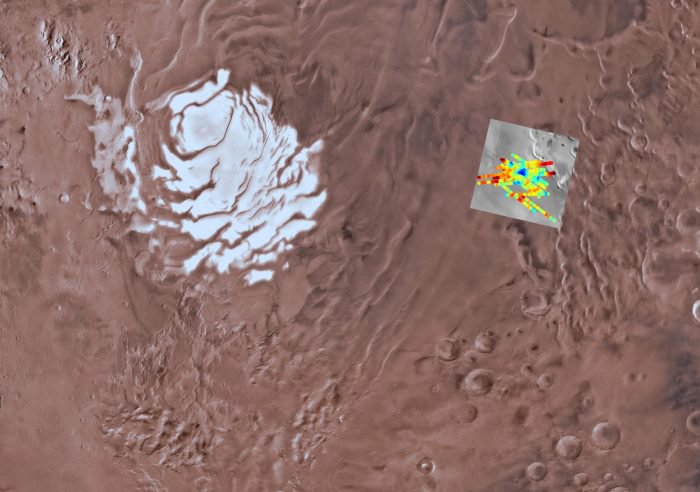 Color photo mosaic of a portion of Planum Australe on Mars. The subsurface reflective echo power is color coded and deep blue corresponds to the strongest reflections, which are interpreted as being caused by the presence of water.Image credit: USGS Astrogeology Science Center, Arizona State University, INAF.

The discovery was made analyzing echoes captured by the the radar instruments on the European Space Agency’s Mars Express, a satellite orbiting the planet since 2002. The data for this discovery was collected from observation made between 2012 and 2015.

Antarctic researchers have long used radar on aircraft to search for lakes beneath the thick glaciers and ice layers, and have found several hundred. The largest is Lake Vostok, which is the sixth largest lake on Earth in terms of volume of water. And it is two miles below the coldest spot on Earth.

So looking for a liquid lake below the southern pole of Mars wasn’t so peculiar after all. In fact, lead author Roberto Orosei of the Institute of Radioastronomy of Bologna, Italy said that it was the ability to detect subsurface water beneath the ice of Antarctica and Greenland that helped inspire the team to look at Mars. 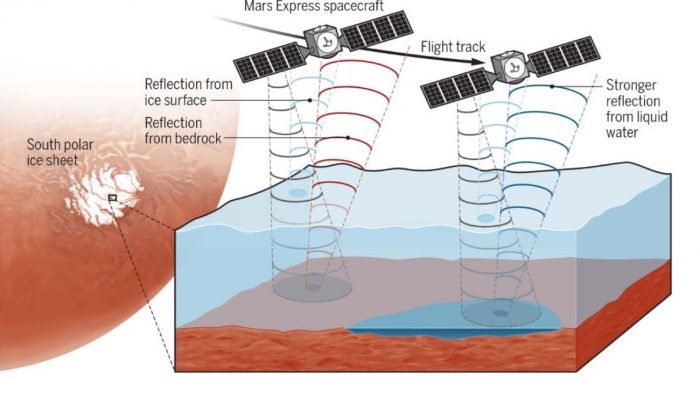 A schematic of how scientists used radar to find what they interpret to be liquid water beneath the surface of Mars.Image credit: ESA.

There are a number of ways to keep water liquid in the deep subsurface even when it is surrounded by ice. As described by the Italian team and an accompanying Science Perspective article by Anja Diez of the Norwegian Polar Institute, the enormous pressure of the ice lowers the freezing point of water substantially.

Added to that pressure on Mars is the known presence of many salts, that the authors propose mix with the water to form a brine that lowers the freezing point further.

So the conditions are present for additional lakes and streams on Mars. And according to Flamini, solar system exploration manager for the Italian space agency, the team is confident there are more and some of them larger than the one detected. Finding them, however, is a difficult process and may be beyond the capabilities of the radar equipment now orbiting Mars. 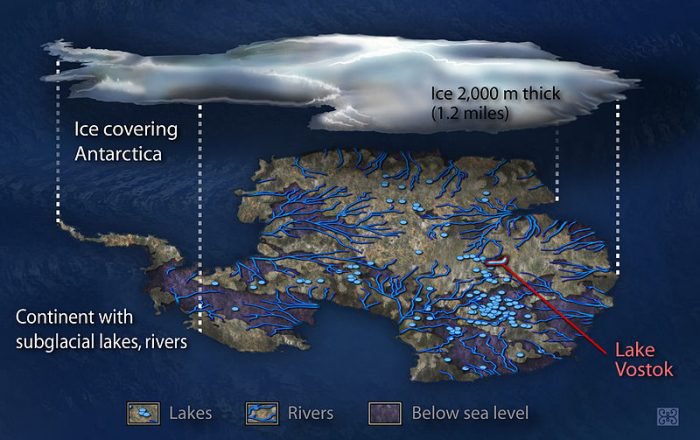 Subsurface lakes and rivers in Antarctica. Now at least one similar lake has been found under the southern polar region of Mars.Image credit: NASA/JPL.

The view that subsurface water is present on Mars is hardly new. Stephen Clifford, for many years a staff scientist at the Lunar and Planetary Institute, even wrote in 1987 that there could be liquid water at the base of the martian poles due to the kind of high pressure environments he had studied in Greenland and Antarctica.

So you can imagine how gratifying it might be to learn, as he put it “of some evidence that shows that early theoretical work has some actual connection to reality.”

He considers the new findings to be “persuasive, but not definitive” — needing confirmation with other instruments.

Clifford’s wait has been long, indeed. Many observations by teams using myriad instruments over the years did not produce the results of the Italian team.

Their discovery of liquid water is based on receiving particularly strong radar echoes from the base of the southern polar ice — echoes consistent with the higher radar reflectivity of water (as opposed to ice or rock.)

After analyzing the data in some novels ways and going through the many possible explanations other than the presence of a lake, Orosei said that none fit the results they had. The explanation, then, was clear: “We have to conclude there is liquid water on Mars.”

The depth of the lake — the distance from top to bottom — was impossible to measure, though the team concluded it was at least one meter and perhaps in the tens of meters.

Might the lake be a habitable? Orosei said that because of the high salt levels “this is not a very pleasant environment for life.”

But who knows? As he pointed out, Lake Vostok and other subglacial Antarctic lake, are known to be home to single-cell organisms that not only survive in their very salty world, but use the salt as part of their essential metabolism.