Jupiter’s Stripes Run Deep, But Hopefully Juno’s Problems Do Not 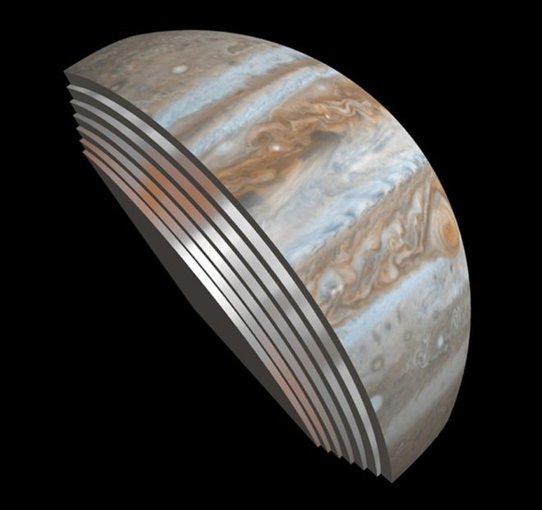 This composite image depicts Jupiter’s cloud formations as seen through the eyes of Juno’s microwave radiometer (MWR) instrument as compared to the top layer, a Cassini imaging science subsystem image of the planet. The MWR can see a couple of hundred miles into Jupiter’s atmosphere with the instrument’s largest antenna. The belts and bands visible on the surface are also visible in modified form in each layer below. (NASA/JPL-Caltech/SwRI/GSFC)

Because telescopes have never been able to see clearly down through the thick clouds of Jupiters– the ones that together form the planet’s glorious stripes– it has remained a mystery how deep they may be.

Based on the Juno spacecraft’s August pass, we now know via its microwave radiometer that the stripes reflect dynamics that occur deep into the planet.

Scott Bolton, leader of the Juno mission reported the team’s conclusions during a press conference at the 2016 meeting of the American Astronomical Society’s Division for Planetary Sciences.

The new images penetrate to depths of about 200 to 250 miles below the surface cloud layer, Bolton said. While the bands seen on the cloud tops are not identical to the bands identified further down, there is a strong resemblance. “They’re evolving. They’re not staying the same,” Bolton said.

The findings have intriguing implications for exoplanet research. Bolton said that they hint at “the deep dynamics and the chemistry of Jupiter’s atmosphere. And this is the first time we’ve seen any giant planet atmosphere underneath its layers. So we’re learning about atmospheric dynamics at a very basic level.”