Home

News

Joining the Microscope and the ...

About Image
When haze built up in the atmosphere of Archean Earth, the young planet might have looked like this artist’s interpretation – a pale orange dot.NASA’s Goddard Space Flight Center/Francis Reddy
Parenteau’s lab glove box with green, purple and other bacteria that is regularly exposed to radiation conditions (left) and a close-up of microbial communities (right).Marc Kaufman/Niki Parenteau
May 31, 2018
Feature Story

The world of biology is filled with labs where living creatures are cultured and studied, where the dynamics of life are explored and analyzed to learn about behavior, reproduction, structure, growth and so much more.

In the field of astrobiology, however, you don’t see much lab biology — especially when it comes to the search for life beyond Earth. The field is now largely focused on understanding the conditions under which life could exist elsewhere, modeling what chemicals would be present in the atmosphere of an exoplanet with life, or how life might begin as an organized organism from a theoretical perspective.

Yes, astrobiology includes and learns from the study of extreme forms of life on Earth, from evolutionary biology, from the research into the origins of life.

But the actual bread and butter of biologists — working with lifeforms in a lab or in the environment — plays a back seat to modeling and simulations that rely on computers rather than actual life.

There are certainly exceptions, and one of the most interesting is the work of Mary “Niki” Parenteau at NASA’s Ames Research Center in the San Francisco Bay area. 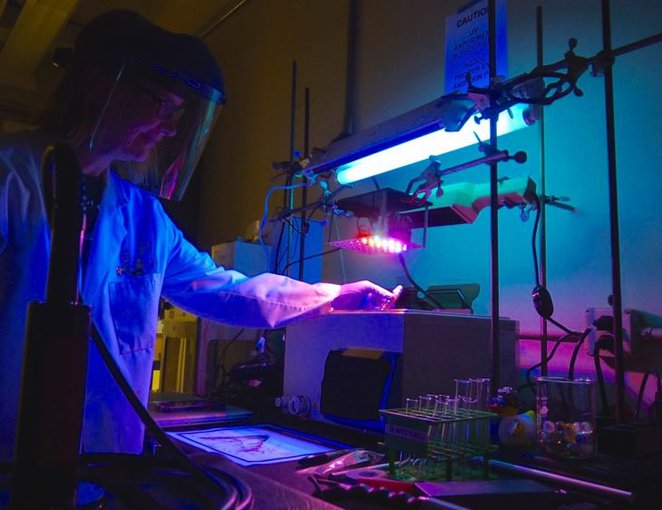 Niki Parenteau of NASA’s Ames Research Center is a microbiologist working in the field of exoplanet and Mars biosignatures. She adds a laboratory biology approach to a field generally known for its astronomers, astrophysicists and planetary scientists.Image credit: Marisa Mayer, Stanford University.

A microbiologist by training, she has been active for over five years now in the field of exoplanet biosignatures — trying to determine what astronomers could and should look for in the search for extraterrestrial life.

Working in her lab with actual live bacteria in laboratory flasks, test tubes and tanks, she is conducting traditional biological experiments that have everything to do with astrobiology.

She takes primitive bacteria known to have existed in some form on the early Earth, and she blasts them with the radiation that would have hit the planet at the time to see under what conditions the organisms can survive. She has designed ingenious experiments using different forms of ultraviolet light and a LED array that simulate the broad range of radiations that would come from different types of stars as well.

What makes this all so intriguing is that her work uses, and then moves forward, cutting edge modeling from astronomers and astrobiologists regarding thick photochemical hazes understood to have engulfed the early Earth — making the planet significantly colder but also possibly providing some protection from deadly ultraviolet radiation.

That was a time when the atmosphere held very little oxygen, and when many organisms had to make their living via carbon dioxide and sulfur-based photosynthesis that did not use water and did not produce oxygen. This kind of photosynthesis has been the norm for much of the history of life on Earth, and certainly could be common on many exoplanets orbiting other stars as well. 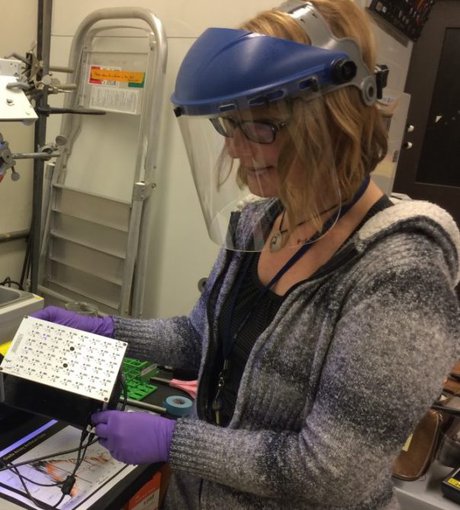 So anything learned about how these early organisms survived in frigid conditions with high ultraviolet radiation — and what potentially detectable byproducts they would have produced under those conditions — would be important in the search for biosignatures and extraterrestrial life.

Parenteau has spent years learning from astronomers working to find ways to characterize exoplanet biosignatures, and she has been eager to convert her own work into something useful to them.

“These are not questions that can be answered by one discipline,” she told me. “I certainly understand that when it comes to exoplanet biosignatures and life detection, astronomy has to be in the lead. But biologists have a role to play, especially when it comes to characterizing what life produces.” 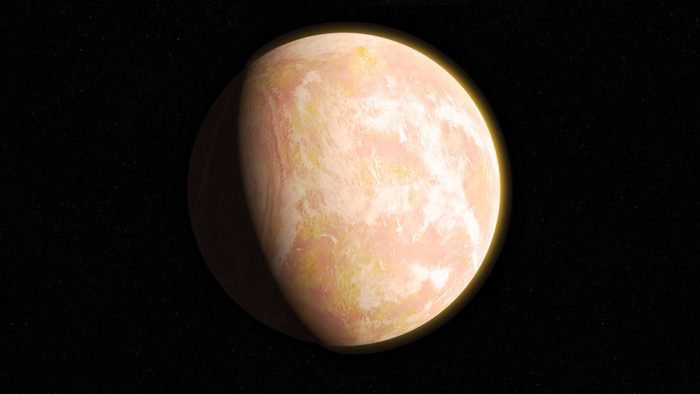 When haze built up in the atmosphere of Archean Earth, the young planet might have looked like this artist’s interpretation – a pale orange dot. A team led by Goddard scientists thinks the haze was self-limiting, cooling the surface by about 36 degrees Fahrenheit (20 Kelvins) – not enough to cause runaway glaciation. The team’s modeling suggests that atmospheric haze might be helpful for identifying earthlike exoplanets that could be habitable.Image credit: NASA’s Goddard Space Flight Center/Francis Reddy.

Here is the back story to Parenteau’s work:

Recent work by NASA Goddard Space Flight Center astronomer and astrobiologist Giada Arney and colleagues points to the existence of a thick haze around the early Archean Earth and probably today around some, and perhaps many, exoplanets. This haze — which is more like pollution than clouds — is produced by the interaction of strong incoming radiation and chemicals (most commonly methane and carbon dioxide) already in the atmosphere.

The haze, Arney concluded based on elaborate modeling of those radiation-chemical interactions, would be hard on any life that might exist on the planet because it would reduce surface temperatures significantly, though probably not always fatally.

On the other hand, the haze would also have the effect of blocking 84 percent of the destructive ultraviolet radiation bombarding the planet — especially the most damaging ultraviolet-C light that would otherwise destroy nucleic acids in cells and disrupt the working of DNA. (Ultraviolet-C radiation is used as a microbial disinfectant.)

Ozone in our atmosphere now plays the role of blocking the most destructive forms of UV radiation, but ozone is formed from oxygen and on early Earth there was very little oxygen at all.

So how did organisms survive the radiation assault? Might it have been that haze? And might there be hazes surrounding exoplanets as well? (None have been found so far.) 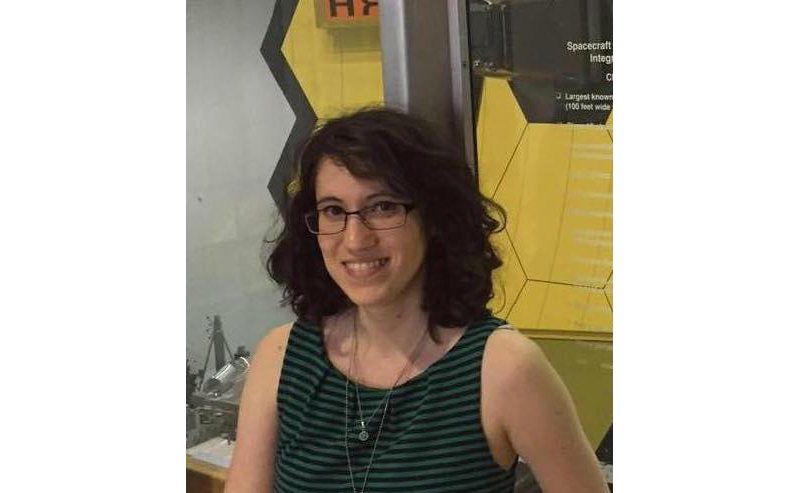 It’s difficult enough to sort through the potentially protective role of a haze on early Earth. To do it for exoplanets requires not only an understanding of the effects of a haze on ultraviolet light, but also how the dynamics of a haze would change based on the amounts and forms of radiation emitted by different types of stars.

It’s all very complicated, but the answers needn’t be theoretical, Arney concluded. They could be tested in a lab.

And that’s where Parenteau comes in, with her desire and ability to design biological experiments that might help scientists understand better how to look for life on distant exoplanets.

“I knew that (Parenteau) had been super interested in this kind of question for a long time,” Arney said. “She one of the few people in the world with the know-how to simulate an atmosphere, and probably the only one in the world who could do the experiment.”

Parenteau’s experiment at first looks pretty low-tech, but in fact it’s very much custom-designed and custom-built.

The ultraviolet bulbs include the powerful, germicidal ultraviolet-C variety, some of the glass for the experiment is made of special quartz that is transparent to that ultraviolet light, the LED array has 48 tiny bulbs that can be controlled by software to provide different amounts and kinds of light as identified and provided by Arney. 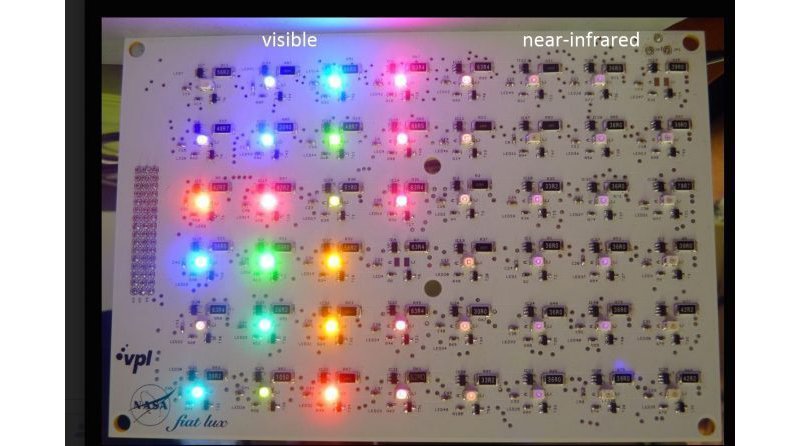 The 48 LEDs (light-emitting diodes) of the board designed and created by Parenteau and Ames intern Cameron Hearne. Each one is independently controlled and can be used to simulate the amount of radiation arriving on a planetary surface — taking into account the flux from the planet’s star and some aspects of its atmosphere. A microbe is then exposed to the radiation to see whether or how it can survive.Image credit: Niki Parenteau.

Before designing and making her own LED board with Ames intern Cameron Hearne, Parenteau met with solar panel specialists who might be able to provide an instrument she could use, but it turned out they were very expensive and not nearly as versatile as she wanted. Having grown up on a farm in northern Idaho, Parenteau is comfortable with making things from scratch, and her experiments reflect that comfort and talent.

How would Parenteau determine whether the haze does indeed protect the microbial cells after exposing them to the various radiation regimes? This is how she explained the process, which measures the number of cells living or dead given a simulated UV and stellar bombardment:

“The latter represents dead ‘popped’ cells that were killed by the UV irradiation. I predict that by simulating the spectral qualities of the haze, which decreases the UV flux by 84%, more cells will survive.” 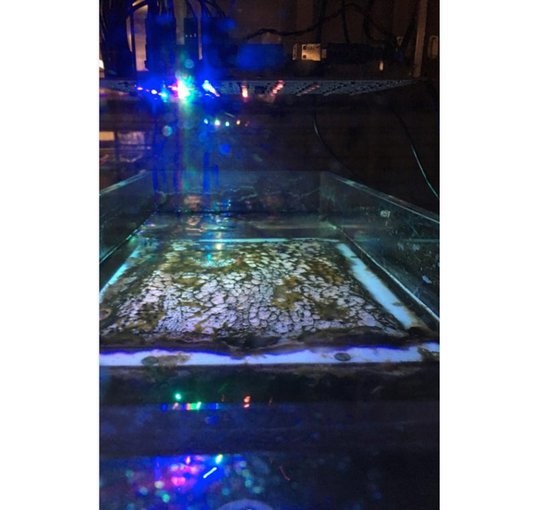 A densely-packed community of microbes, including oxygen-producing cyanobacteria as well as anoxygenic purple and green bacteria, being studied with Parenteau’s LED array. A central question involves what gases are emitted and might be detectable on a distant planet.Image credit: Niki Parenteau.

The Parenteau-Arney collaboration is being funded through a National Astrobiology Institute grant to the University of Washington’s famously-interdisciplinary Virtual Planetary Laboratory.

With that in mind, she is also measuring the gases produced by microbes under different radiation and atmospheric conditions, and that is directly applicable to searching for extraterrestrial life.

If and when she does find particularly interesting results in the gas measurements inside the anaerobic glove box, she says, she knows where to go. 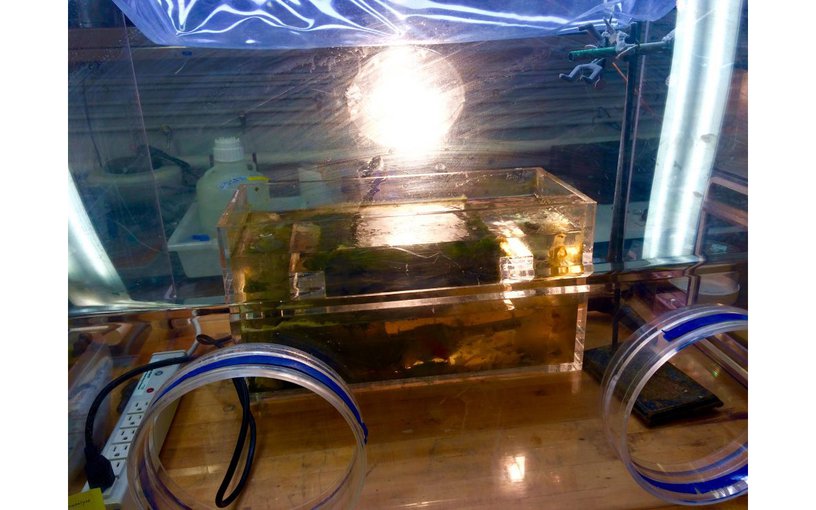 Parenteau’s lab glove box with green, purple and other bacteria that is regularly exposed to radiation conditions believed to have existed on early Earth when a photochemical haze is believed to have been present.Image credit: Marc Kaufman.

“I would hand the results to an astronomer. We could say that if a particular kind of exoplanet with a particular atmosphere had microbial life, this is the suite of gases we would expect to be emitted.”

Those gases, Parenteau says, may be photochemically altered as they as they rise through the planet’s atmosphere to the upper levels where they could be detected by the telescopes of the future. But in the challenging and complex world of biosignatures, every bit of hard-won data is most valuable since it could some day lead to a discovery for the ages.