Home

News

In Search of an Ancient ...

About Image
In 1970, Venera 7 made the first soft landing on Venus and returned 23 minutes of data. Image from Issue #3 of Astrobiology: The Story of our Search for Life in the Universe. The Astrobiology Graphic Histories are available at: https://astrobiology.nasa.gov/resources/graphic-histories/NASA Astrobiology Program
The thick atmosphere of Venus can be seen in this image captured by the Akatsuki orbiter. This is a synthesized false color image of Venus using 283-nm and 365-nm images.JAXA
The night side of Venus in thermal infrared. This false-color image uses data from the Japanese Akatsuki’s IR2 camera in two wavelengths, 1.74 and 2.26 microns. Darker regions denote thicker clouds. Changes in color can denote differences in cloud particle size or composition from place to place.JAXA / ISAS / DARTS / Damia Bouic
June 11, 2019
Research Highlight

In Search of an Ancient Global Magnetic Field on Venus

The crust of Venus could contain minerals that would tell us whether or not the planet once had a global magnetic field.

Earth’s global magnetic field is thought to be tied to properties of the planet’s fluid, metallic core. If conditions were similar on Venus at some point in the planet’s past, evidence of an ancient magnetic field could be found in magnetized rocks at Venus’ surface. Magnetized rocks have already been identified on the Moon, Mars, and Mercury. However, the surface of Venus is so hot that many scientists believe ancient magnetization in rocks would not be stable enough to survive on the surface today.

The new study shows that common minerals (such as magnetite) could be stable on Venus for billions of years, even when exposed to current Venus surface temperatures. In fact, the team behind the research believes that there could be enough magnetized material in the Venusian crust for it to be detected by low altitude orbiters or aerial missions to the planet’s atmosphere. 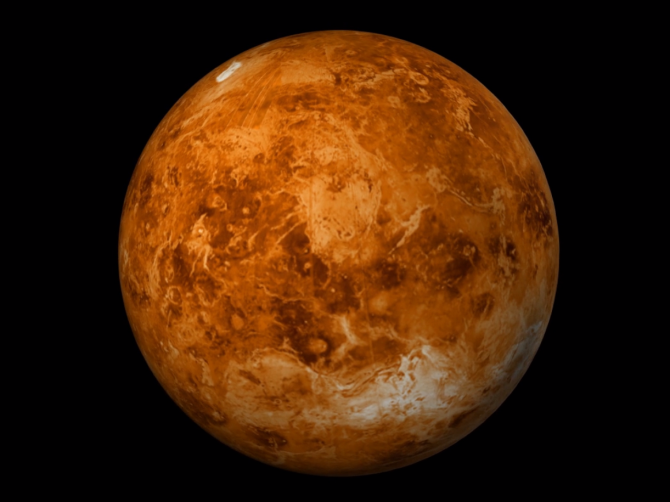 Studying planetary magnetic fields can help astrobiologists understand the origin and evolution of terrestrial planets. Venus also provides important data for comparative planetology. Venus is a similar size to the Earth, but the surface of Venus is far from habitable for life as we know it. Analyzing the differences between the Earth and Venus can help astrobiologists better understand how a planet’s climate, environment, and physical properties are tied to habitability.

The study, “Detectability of Remanent Magnetism in the Crust of Venus,” was published in Geophysical Research Letters. The work was supported by the Nexus for Exoplanet System Science (NExSS).  NExSS is a NASA  research coordination network supported in part by the  NASA Astrobiology Program. This program element is shared between NASA’s Planetary Science Division (PSD) and the Astrophysics Division.