Sherwood Chang, an early leader in the development of NASA’s exobiology and astrobiology programs.

Sherwood Chang, an early leader in the development of NASA’s exobiology and astrobiology programs, died June 6 in Tacoma, Washington. He was 81.

Dr. Chang, a physical organic chemist by training, worked for 30 years (1967-1998) at NASA’s Ames Research Center. As Palo Alto Online has reported, “Dr. Chang was a world leader in the evolution of Space Science. His innovative and collaborative approach to science made him one of the leading intellectual figures uniting cosmochemistry, origins of life research and molecular biology to help create the new field of Astrobiology.” 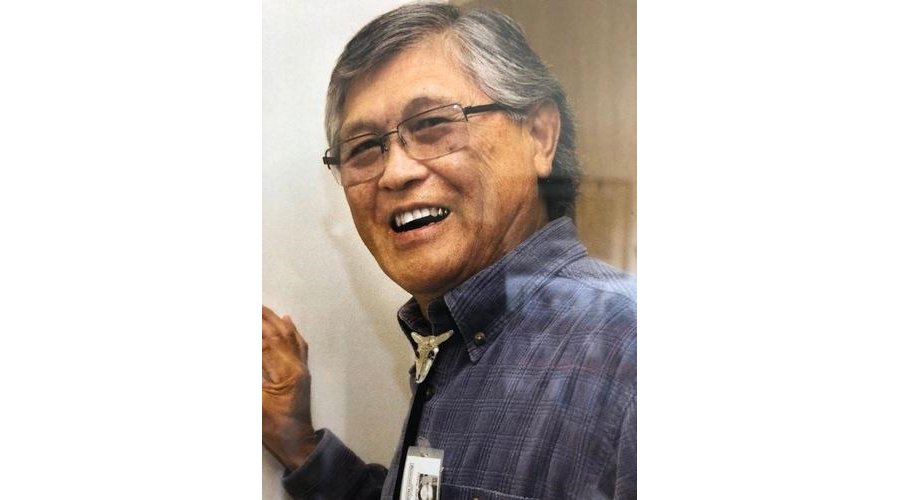 Dr. Sherwood Chang (1940-2022) was an early leader in the development of NASA’s exobiology and astrobiology programs.Image credit: Chang.

Born November 18, 1940, in San Francisco, California, he went to high school in Cheltenham, Pennsylvania, earned his undergraduate degree from Harvard College in 1962, and was awarded his Ph.D. in physical organic chemistry from the University of Wisconsin-Madison in 1966. He then spent a year as a postdoctoral researcher at Stanford University and joined the Chemical Evolution branch of the Exobiology Division at NASA Ames in September 1967.

When he joined NASA, Dr. Chang was interested in studying prebiotic evolution. “But early in the year ’68 or thereabouts,” he said in a 1997 oral history interview, “it became clear that the most interesting thing looming on the horizon was the return of lunar samples. As early as 1968 we were preparing to do analysis on lunar samples. So my interest turned primarily in that direction. That involved devising ways to do analyses, it involved preparing laboratories, establishing clean experimental protocols.”

Dr. Chang was principal investigator for NASA’s Apollo Lunar Science Program, and in 1969, he worked in NASA Ames’s Lunar Chemical Laboratory on analyses of lunar samples returned to Earth by Apollo 11 astronauts. “It turned out of course that we found no organic matter that was of the structurally interesting type. That is, we didn’t find amino acids, fatty acids, or other complex organic compounds that could not be explained by terrestrial contamination,” he said. “But the Moon samples did have an interesting chemistry involving the so-called biogenic elements – that is hydrogen, carbon, nitrogen, and oxygen.” 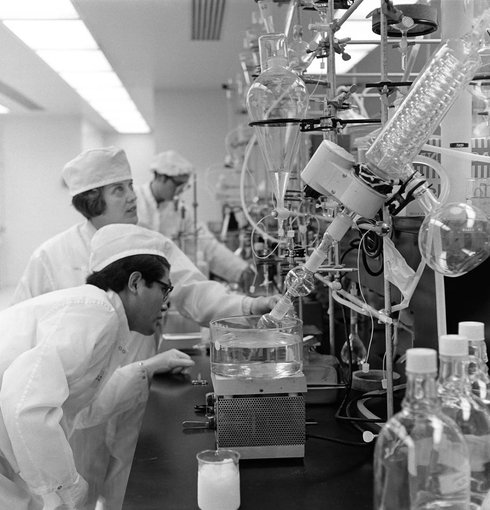 Chemist Sherwood Chang and microbiologist Jo Ann Williams in the Lunar Chemical Laboratory at NASA’s Ames Research Center. This photo from 1969 show researchers at NASA’s Ames Research Center examining samples of Moon rocks and soil and that astronauts brought back from the Apollo 11 mission. The researchers are looking for signs of life endemic to the Moon, as well as organic compounds that are the basic building blocks of life. Of course, no lunar life was found in these samples, and we now know that the Moon does not harbor life. Nevertheless, these tests became the first time that NASA looked for the possibility of life existing on another world using samples from that world.Image credit: NASA/J. Remmington.

Dr. Chang was awarded NASA’s Exceptional Scientific Achievement Medal (1976) for his contributions in geochemistry, cosmochemistry, and lunar and planetary science. He also received two NASA Special Achievement Awards, in 1973 and 1981. At NASA Ames, he served as assistant chief for science and technology, extraterrestrial research (1983), and the head of NASA’s exobiology division (1985-1998). In 1999 he was elected a fellow of the International Society for the Study of the Origins of Life (ISSOL).

Though a modest person, Dr. Chang played a seminal role in creating what has become the NASA Astrobiology Program. Through his work on analyzing lunar samples, he became engaged in analyses of meteorites collected on Earth, starting with the Allende meteorite, found in 1969, which, he said, “doesn’t contain a lot of organic matter, nor evidence of having had any liquid water on it,” and the Murchison meteorite, also found in 1969, which was rich in organic compounds – “the fact that these three kinds of rocks came to us in that year really marked 1969, 1970 as a watershed…. The whole sort of planetary context surrounding the development of biogenic elements, in the solar system, emerged from the intellectual ferment that began in those days.”

Astrobiologist John Rummel had the pleasure to meet Chang when he was a post-doc, and to benefit from his work again as a NASA program manager. “Sherwood was a calm, good-humored and insightful scientist and manager who cared deeply about his people and their discoveries,” Rummel says. “I think we would all like to be colleagues the way Sherwood was to us.”

At the time of his retirement from NASA, on September 29, 1998, his colleagues presented him with a stromatolite from the Morrison formation, with this dedication: “This stromatolite was presented to Dr. Sherwood Chang…to recognize his many contributions to NASA, to exobiology, and to science, which extended well beyond his own areas of research. Sherwood’s intellectual breadth and his enduring support of exobiology have fostered excellence throughout the field. Future discoveries about origins, evolution and distribution of life in the universe will indeed bear his legacy.” 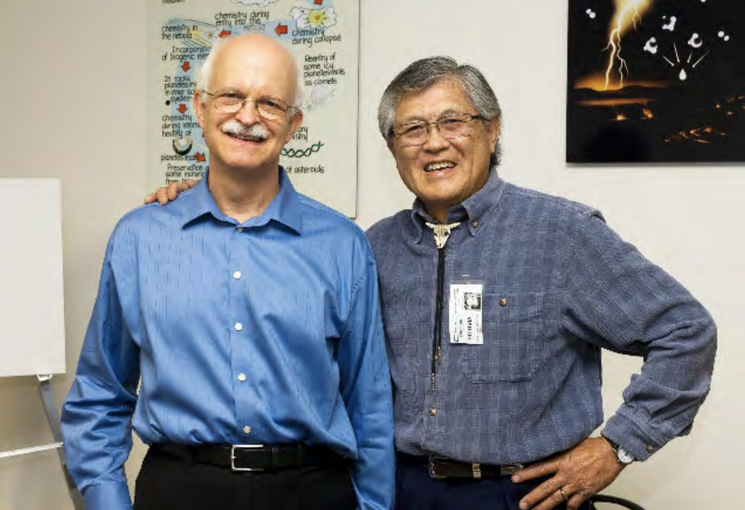 In 2009, NASA Ames dedicated the Sherwood Chang Exobiology Conference Room to him, with these words: “Dr. Sherwood Chang played a keystone role in Exobiology and Space Sciences during his career at NASA Ames Research Center from 1967 to 1998. He was the Exobiology team leader and then Chief of the Exobiology Branch from the early 1970s until 1998. His distinguished research accomplishments included discoveries about carbon and other life-related elements and compounds in lunar regolith, meteorites, prebiotic environments and the cosmos. As a physical organic chemist, Sherwood was a leading intellectual figure who united cosmochemistry, origins of life research and molecular biology to create the field of astrobiology that ultimately emerged at the dawn of the twenty-first century.” He was a co-author of more than 120 papers, written with colleagues in exobiology.

Dr. Chang was committed to mentoring the young scientists who passed through his field. According to his family, he found tremendous satisfaction in encouraging and supporting the next generation of space scientists and applauding their achievements.

He will be missed, but his legacy lives on.