Impacts and Volcanism at the End-Cretaceous 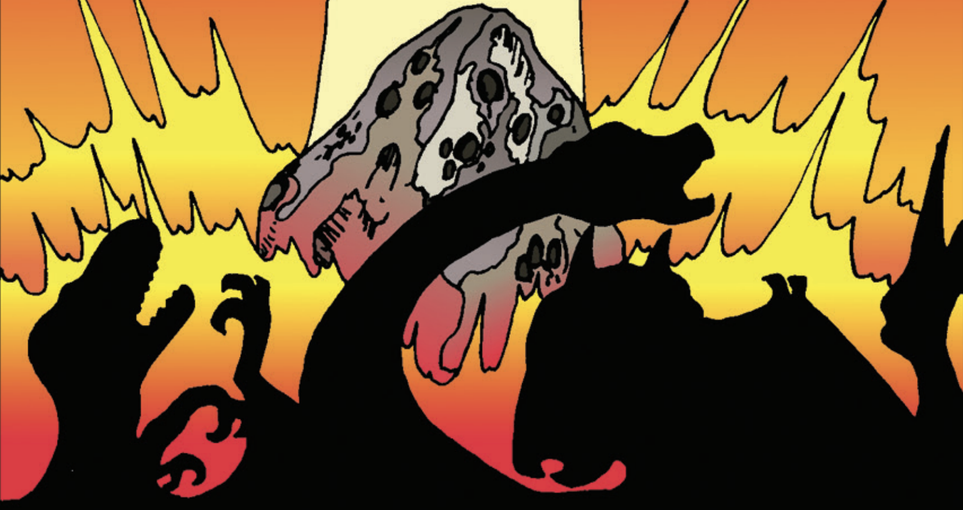 Impact events may have been responsible for some mass extinction events on Earth. This panel is from Issue 3 of Astrobiology: The Story of our Search for Life in the Universe, available at: https://astrobiology.nasa.gov/resources/graphic-histories/Image credit: NASA Astrobiology.

A recent study supported in part by the NASA Astrobiology Program is contributing to our understanding of the end-Cretaceous mass extinction, which occurred some 66 million years ago. This event is possibly best known for wiping out the dinosaurs, and is one of the most well-studied mass extinctions in Earth’s history. Geological evidence shows two possible contributors to the extinction. First, the Earth was struck by an object from space, resulting in a massive impact event. The second feature is large-scale volcanic activity that covered vast areas of the land and ocean floor with basalt lava.

Researchers used carbon cycle modeling and paleotemperature records to constrain the timing of volcanogenic outgassing in relation to the impact event. The results indicate that major outgassing began and ended before the impact occurred. Coupling this result with other lines of evidence, the team proposes that only the impact event itself coincides with the end-Cretaceous mass extinction. However, volcanic gases may have played an important role in shaping the biosphere following the extinction event as different species rose to prominence.

The study, “On impact and volcanism across the Cretaceous-Paleogene boundary,” was published in the journal Science. The work was supported by NASA Astrobiology through the Exobiology Program. This newly-revealed science is also a critical part of NASA’s work to understand the Universe, advance human exploration, and inspire the next generation. As NASA’s Artemis program moves forward with human exploration of the Moon, the search for life on other worlds remains a top priority for the agency.