About Image
Tidal dissipation is usually most prominent in shallow oceans, while the ocean on Enceladus (a moon of Saturn) is believed to be tens of kilometers thick.NASA/JPL-Caltech/Space Science Institute
Illustration of the interior of Saturn's moon Enceladus showing a global liquid water ocean between its rocky core and icy crust. Thickness of layers shown here is not to scale.NASA/JPL-Caltech
Dec. 7, 2017
Research Highlight

Laboratory experiments on Earth can now simulate the conditions under which life might emerge on Saturn’s moon Enceladus, as well as other icy alien worlds, according to new research published in the September 2017 issue of the journal Astrobiology.

Since there is life virtually wherever there is water on Earth, researchers looking for alien life often focus on planets in the habitable zones of stars, which are the regions around stars where it is warm enough for worlds to possess water on their surfaces. However, in the past few decades, scientists have increasingly found evidence for oceans – and, potentially, life – hidden under the icy crusts of places such as Jupiter’s moons Europa, Ganymede and Callisto, and Saturn’s moons Enceladus and Titan.

On Earth, life is often thought to have originated near hydrothermal vents, which include hot springs on land, as well as fissures near undersea volcanoes. Much research has suggested that icy moons might also host active hydrothermal vents on their ocean floors. Enceladus is of particular interest because data from NASA’s Cassini spacecraft suggests there is activity within its ocean involving temperatures exceeding 90 degrees Celsius (194 degrees Fahrenheit), which in turn hints at geothermal heating by hydrothermal vents. 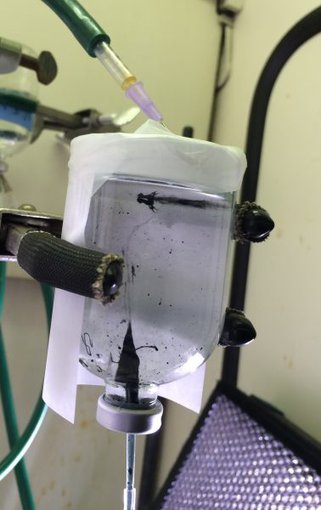 Iron sulfide hydrothermal chimney precipitated in laboratory simulation of a vent on an ocean world such as Enceladus.Image credit: Laurie Barge.

Currently, many groups of scientists are experimentally simulating prebiotic chemistry – the chemical reactions that might lead to life – in all kinds of potential environments, including hydrothermal vents, found on the young Earth and other worlds like Enceladus.

“The early Earth when life began was such a different planet than the Earth we know today, and rock samples from that time are scarce or nonexistent,” says the study’s lead author Laurie Barge, an astrobiologist at NASA’s Jet Propulsion Laboratory in Pasadena, California. “We can learn a lot about the last common ancestor of life by studying modern life, but to understand how the pathway from geochemistry to biochemistry originally functioned, we have no choice but to simulate early Earth in the lab.”

Given that researchers are experimentally simulating the prebiotic chemistry of Earth, “why not Enceladus or the other ocean worlds?” says Barge. “It’s great that in the laboratory, we have the ability to make experiments that are little micro-environments of places that would be extremely difficult, if not impossible, to visit or sample, such as early Earth’s ocean four billion years ago, or the minerals that might be forming on Enceladus’ seafloor today.”

One set of activities that might take place in the hydrothermal vent systems of icy worlds, and which scientists are simulating, are reactions between water and rock. For instance, in serpentinization, hydrothermal water reacts with the mineral olivine in the ocean crust. Serpentinization introduces chemicals into the water that, when they react with seawater, can form chimney-like structures that, on Earth, might have concentrated organic materials together so that life could emerge.

To simulate the chemical reactions that might occur between water and rock on worlds such as Europa and Enceladus, different groups of researchers are using so-called “hydrothermal reactors.” These involve two pressurized tanks, one containing simulated hydrothermal fluid, the other simulated ocean water. In these experiments, the liquids flow past a bed containing a variety of minerals, such as synthetic volcanic rock. Scientists can then analyze the chemicals in these fluids to look for signs of specific reactions.

To synthesize the kinds of chimney-like structures found at many hydrothermal vents, research teams have slowly injected mineral-laden solutions into glass jars filled with a fluid mimicking seawater. Depending on the concentrations of the different chemicals used to grow these structures, the chimneys may either be mounds with single hollow centers or “chemical gardens” with multiple hollow tubes. According to Barge and her colleagues, prior experiments have found that the minerals in these structures could help form small organic compounds from inorganic building blocks.

The pressures, temperatures and compositions of the fluids and rocks in all these experiments can be easily tailored to match the kinds of conditions found on the seafloor of Enceladus.

“There is still a lot of uncertainty about the specifics of the environment in which life began,” Barge says. “So we think the best strategy for pursuing these questions in the lab is to design experiments that are modular, meaning that you can substitute different ingredients and parts to test the effects of things individually.”

All in all, researchers can use these experiments to explore different ideas about how the chemistry in alien oceans might work.

“It’s exciting that so many different groups are working on pieces of this problem, and hopefully we will eventually be able to accurately simulate what prebiotic reactions might have taken place on early Earth or on the ocean worlds,” Barge said.