How to Give Mars an Atmosphere, Maybe 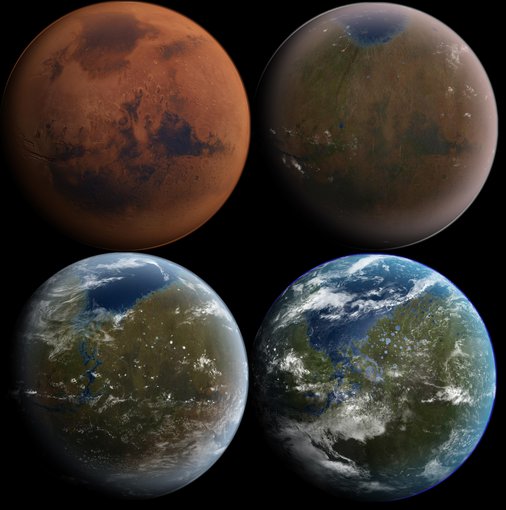 An artist rendering of what Mars might look like over time if efforts were made to give it an artificial magnetic field to then enrich its atmosphere and made it more hospitable to human explorers and scientists. (NASA)

Earth is most fortunate to have vast webs of magnetic fields surrounding it. Without them, much of our atmosphere would have been gradually torn away by powerful solar winds long ago, making it unlikely that anything like us would be here.

Scientists know that Mars once supported prominent magnetic fields as well, most likely in the early period of its history when the planet was consequently warmer and much wetter. Very little of them is left, and the planet is frigid and desiccated.

This knowledge leads to an interesting question: if Mars had a functioning magnetosphere to protect it from those solar winds, could it once again develop a thicker atmosphere, warmer climate and liquid surface water?

James Green, director of NASA’s Planetary Science Division, thinks it could. And perhaps with our help, such changes could occur within a human, rather than an astronomical, time frame.

In a talk at the NASA Planetary Science Vision 2050 Workshop at the agency’s headquarters, Green presented simulations, models, and early thinking about how a Martian magnetic field might be re-constituted and the how the climate on Mars could then become more friendly for human exploration and perhaps communities.

It consisted of creating a “magnetic shield” to protect the planet from those high-energy solar particles. The shield structure would consist of a large dipole—a closed electric circuit powerful enough to generate an artificial magnetic field.

Simulations showed that a shield of this sort would leave Mars in the relatively protected magnetotail of the magnetic field created by the object. A potential result: an end to largescale stripping of the Martian atmosphere by the solar wind, and a significant change in climate.

“The solar sytstem is ours, let’s take it,” Green told the workshop. “And that, of course, includes Mars. But for humans to be able to explore Mars, together with us doing science, we need a better environment.” 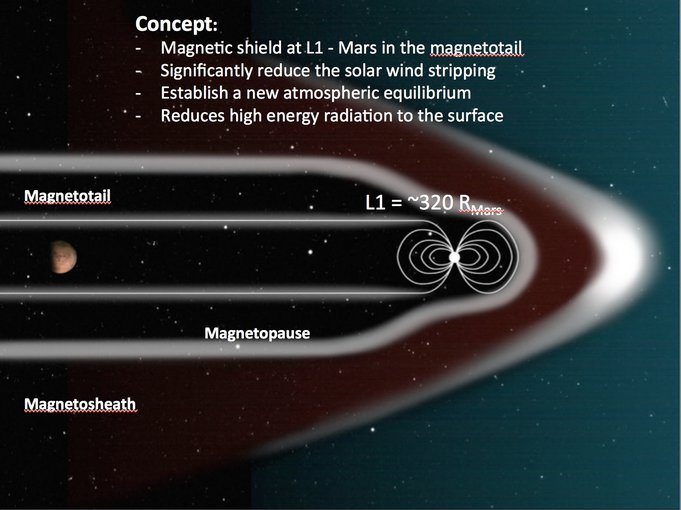 An artificial magnetosphere of sufficient size generated at L1 – a point where the gravitational pull of Mars and the sun are at a rough equilibrium — allows Mars to be well protected by what is known as the magnetotail. The L1 point for Mars is about 673,920 miles (or 320 Mars radii) away from the planet. In this image, Green’s team simulated the passage of a hypothetical extreme Interplanetary Coronal Mass Ejection at Mars. By staying inside the magnetotail of the artificial magnetosphere, the Martian atmosphere lost an order of magnitude less material than it would have otherwise. (J. Green)

Is this “terraforming,” the process by which humans make Mars more suitable for human habitation? That’s an intriguing but controversial idea that has been around for decades, and Green was wary of embracing it fully.

“My understanding of terraforming is the deliberate addition, by humans, of directly adding gases to the atmosphere on a planetary scale,” he wrote in an email.

“I may be splitting hairs here, but nothing is introduced to the atmosphere in my simulations that Mars doesn’t create itself. In effect, this concept simply accelerates a natural process that would most likely occur over a much longer period of time.”

What he is referring to here is that many experts believe Mars will be a lot warmer in the future, and will have a much thicker atmosphere, whatever humans do. On its own, however, the process will take a very long time.