About Image
An artist’s impression of a ‘snowball Earth’.NASA
April 11, 2018
Research Highlight

How Tidally-Locked Planets Could Avoid a ‘Snowball Earth’ Fate

Tidally-locked planets in the habitable zone of stars may be able to avoid global ice ages, according to a study that models the interplay of where ice forms and how it reflects sunlight. Meanwhile, a second study has found that planets that are strongly tilted are more likely to experience sudden ice ages.

The “habitable zone” around stars, where it’s warm enough for liquid water to exist on an Earth-like world’s surface, has long been the gold standard in assessing the potential for life on other worlds, but as our understanding of astrobiology deepens, scientists are looking for other clues to habitability.

The kind of days, nights and seasons that shape conditions on alien worlds can differ radically from Earth’s, even when a planet or moon is situated within the habitable zone.

One qualifier is a planet’s axial tilt, also known as its obliquity. The Earth spins at an angle of 23.5 degrees relative to the Sun, meaning most sunlight hits the equator, while the poles are so cold they form ice caps. However, a planet tilted over by more than 55 degrees could potentially form an equatorial ice belt, as well as poles that would be incredibly hot during the summer and extraordinarily cold during the winter, and so life living in polar regions would have to adapt to both extreme heat and cold.

Or, an alien planet or moon might be trapped in a resonance with whatever body it is orbiting, such that the length of time it takes to make one rotation is exactly the same amount of time it takes to orbit its parent body. The consequences of this is that the planet or moon becomes “tidally locked,” and has one frozen side that always faces away from its star and one side that is in constant sunlight. Our Moon, for example, is tidally locked to Earth, which is why we always see the familiar “man in the Moon” on its nearside. 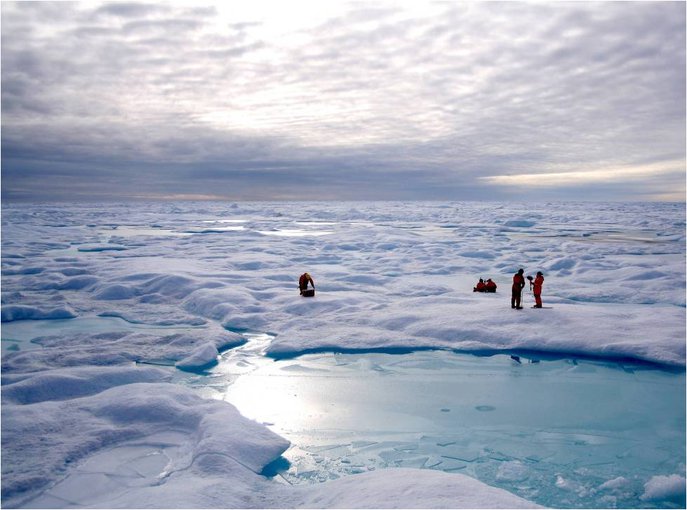 The icy archipelago of Spitsbergen in the Norwegian Arctic. Snowball worlds could have icy terrain like this across their entire surface.Image credit: Thomas A. Brown and Simon T. Belt.

Such differences influence whether these worlds are warm enough to possess flowing water, or whether they are instead frozen snowballs experiencing global ice ages. Even planet Earth, the only world known to have life on it, has teetered toward frozen extremes in its geological history.

Planetary scientist Jade Checlair of the University of Chicago and her colleagues investigated whether tidally locked planets in habitable zones could ever enter snowball states in which ice covers their entire surface. They focused on the small, dim stars known as red dwarfs, which are the most common stars in the cosmos. Because red dwarfs, also known as M-dwarfs, are cool stars, their habitable zones are relatively close, often much nearer than even Mercury’s distance (~58 million kilometers) from the Sun. When a planet orbits very near a star, the star’s gravitational pull can force the world to become tidally locked.

“A large percentage of the planets that we expect to find and be able to study are going to be orbiting M-stars,” says Checlair. “Many of them will host at least one Earth-sized planet.”

Checlair said that although going through a snowball state would likely “eradicate pre-existing complex animal life” on a planet, Earth’s experience with this dramatic turn of affairs between roughly 750 million and 635 million years ago brought aboutan increase in both oxygen and complex life.

“The increase in complex life is thought to have happened both due to the rise in oxygen and to the evolutionary pressure created by a snowball state,” she says.

For instance, the freezing temperatures and other harsh conditions during a snowball state on Earth likely exerted a strong pressure on life to either adapt or die. This evolutionary pressure probably led to the development of complex organisms, who then competed with each other for resources, exerting still more pressure to adapt or die.

However, Checlair and her colleagues found that tidally-locked planets in habitable zones may be unlikely to enter a snowball state. The scientists detailed their findings in Astrophysical Journal.

To reach their conclusions, the researchers developed a global climate model of a tidally locked Earth-like planet in a habitable zone. They focused on how much light the planet absorbed from its star and how much bounced back into space with highly-reflective ice cover.

The scientists found that because of the way that ice accumulates across the surface of this planet, the snowball state would not just suddenly happen. Instead, their model suggested it would smoothly transition from partial to complete ice coverage and back. Furthermore, an active carbon cycle – carbon being a powerful greenhouse gas – could help tidally-locked planets avoid complete glaciation.

“It is not clear yet whether a snowball state is more detrimental or more beneficial to the possibility of life on habitable planets,” says Checlair. “It definitely has an effect on habitability, but further study is required to determine whether this effect is positive or negative.” 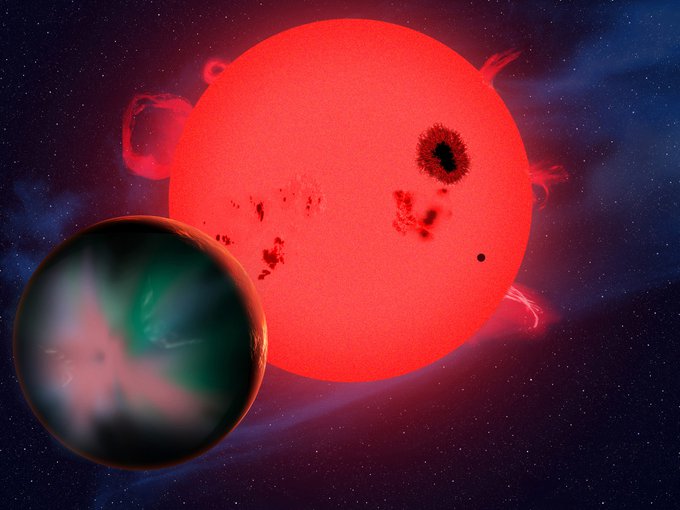 Planets orbiting in the habitable zones around red dwarfs are frequently found to be tidally-locked, so that their day is as long as their year, and their rotation rate means they always show the same face to their star.Image credit: David A. Aguilar (Harvard CfA).

In a different study, Brian Rose, a climate dynamicist at the University at Albany in New York, examined alien planets in habitable zones with a range of axial tilts. He and his colleagues wanted to see if worlds with high obliquities in habitable zones could possess stable, long-lived ice belts around their equators, as well as other consequences that would have major impacts on those planets. For instance, the polar regions of high-obliquity planets would experience constant sunlight for days during the summer and perpetual darkness for days during the winter, so that “all photosynthetic life would have to be well-adapted to this strongly seasonal regime,” he says.

Rose’s team developed a global climate model that could simulate many different obliquities. These models also simulated the way that snow, ice, water and land reflect light at different latitudes, and the way that atmospheric and ocean currents move heat from warm to cold regions of the planet.

The researchers discovered that it may be rare for any habitable world to possess an equatorial ice belt. They also found that potentially habitable planets with high obliquities of 55 degrees or more could swing from completely ice-free to completely ice-covered states. Rose and his colleagues also detailed their findings in a paper published in Astrophysical Journal.

“What’s exciting about these results is really the simplicity of the model, which lets us explore really wide variations in possible planetary characteristics in a simple and organized way,” Rose says.

The scientists found that on high-obliquity worlds, ice-free polar caps usually absorbed more light than the ice-covered equatorial regions reflected, which caused warming that easily destabilized the ice belts, says Rose. They found that the number of those worlds with polar ice caps should outnumber those with equatorial ice belts by three- to four-fold.

According to Rose, potentially habitable planets with high obliquities might be prone “to violent climatic swings between global snowball and completely ice-free conditions.”

“Is this hypothetical planet more or less suitable for harboring life than Earth?” asks Rose. “I don’t have a good answer to that question. I think the community is still grappling with these concepts.”