About Image
Earth today has an oxygen-rich atmosphere, but that oxygen might not have been possible without manganese lending a helping hand.NASA
April 11, 2019
Research Highlight

How Manganese Played a Pivotal Role in Photosynthesis and Oxidation Protection

New research has identified manganese as an unsung hero in the evolution of life on Earth, as it enabled a form of pre-oxygen photosynthesis and helped protect against cellular oxidation.

Oxygen is so inherent to life on Earth today that we take its presence for granted, and it’s easy to forget that Earth’s atmosphere wasn’t always oxygen-rich. Many factors were involved in the rise of oxygen on Earth, but among them was the presence of lesser-known chemical elements such as manganese.

It turns out that the story of oxygen on Earth is really the story of the relationship between manganese and oxygen. Since Earth’s birth 4.54 billion years ago, manganese has been abundant in igneous rocks and in the oceans. Free oxygen in the atmosphere emerged when Earth was roughly half of its current age, during the Great Oxygenation Event. One might assume that the story of life on our planet starts there, but much had to happen to pave the way for processes such as photosynthesis in order for oxygenation to yield life. 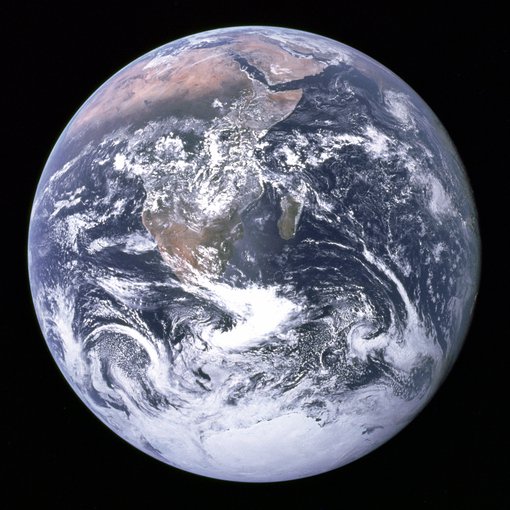 Earth today has an oxygen-rich atmosphere, but that oxygen might not have been possible without manganese lending a helping hand.Image credit: NASA.

Manganese chemistry on Earth behaved very differently before the Great Oxygenation Event than it did after, as the presence of oxygen fundamentally changed how life can interact with manganese. The most significant example of that repurposing paved the way for photosynthesis.

“Manganese is a central piece of the puzzle in the transition from a world without oxygen to a world dominated by oxygen,” Lingappa says.

Manganese chemistry was key to the processes that facilitated the rise of oxygen, but at the time, this shift was more of a curse than a blessing. The Great Oxygenation Event took a massive toll on the existing organisms on the planet, causing widespread extinction.

Alexandria Johnson, who is an Assistant Professor of Earth, Environmental, and Planetary Studies at Brown University, emphasizes the study’s demonstration of a key point about elemental interaction and adaptation. “If life is created under one set of conditions, but then changes the conditions in which it lives, it still needs to have the ability to survive and succeed,” she says. Manganese enabled an anti-oxidant system that allows life to overcome oxidative stress (manganese phosphates are commonly used to prevent rust and oxidation, and manganese even prevents oxidation in frozen sperm.

This is another example of the cross-talk between manganese and oxygen. “Manganese chemistry and its fundamental role in photosynthesis was fortuitously already in place and could be co-opted” to protect cells from the toxicity of oxygen, says Lingappa. It was also serendipitous that the “cells that encountered lots of oxygen were already interested in manganese because of photosynthesis,” she says. Otherwise, cells might not have figured out manganese’s anti-oxidant properties. It seems our debt to manganese is two-fold: not only did it help catalyze photosynthesis, but it also helped cells survive rise of oxygen. If either of those outcomes were different, we might not be here. 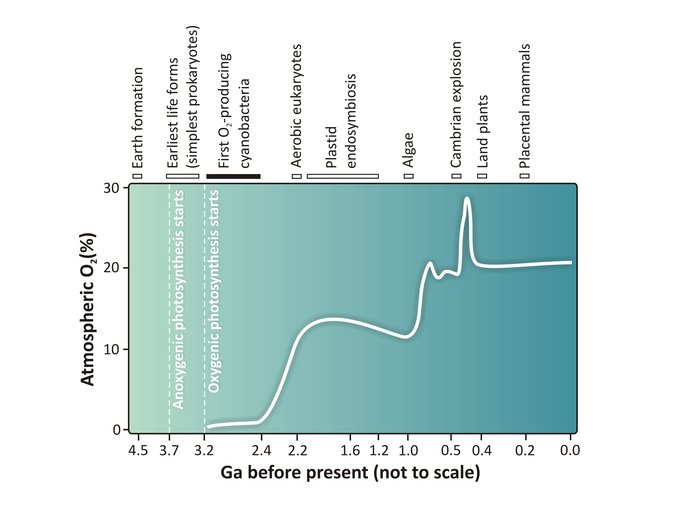 How the concentration of free oxygen in the atmosphere has varied throughout Earth’s history.Image credit: Govindjee (University of Illinois at Urbana-Champaign)/Dmitriy Shevela (University of Stavanger).

The roles manganese has played in the rise of life are specific to Earth, but Lingappa points out that her team’s findings serve as a reminder that “there could be other paths for other planets that could support a similar-scale biosphere.” Similarly, life has been so different throughout Earth’s history that characteristics such as oxygen toxicity challenge our understanding of what’s possible even on our own planet, let alone on another.

“We like to use Earth as a template by which we can measure a planet’s capacity for life, but [humans] are a blip in Earth’s history and it’s unfair to think that life could only persist under today’s conditions,” Johnson adds.

It’s easy to focus on the elements essential to life as we now know it (carbon, Hydrogen, nitrogen, oxygen, phosphorus and sulfur), but doing so ignores the evolutionary process of life on the planet. Johnson points out that, “Digging into the role elements such as manganese may have played on early Earth is essential to our understanding of life, especially with the vastly different conditions under which life emerged.”

Understanding the evolution of life on Earth informs our search for life elsewhere, particularly when it comes to oxygenic photosynthesis. Given how crucial the process is on our planet, it’s remarkable that it happened so late in Earth’s history and was so difficult. “That stepping stone of manganese is a critical piece of understanding” how photosynthesis evolved on Earth, says Lingappa. “Maybe other planets have stepping stones too?”

The work was supported by NASA Astrobiology through the Exobiology & Evolutionary Biology Program, as well as the Simons Collaboration on the Origins of Life, the David and Lucile Packard Foundation, NSFIOS proposal #1833247 and NSF Graduate Research Fellowship.