Has America Really Lost Its “Lead in Space?” 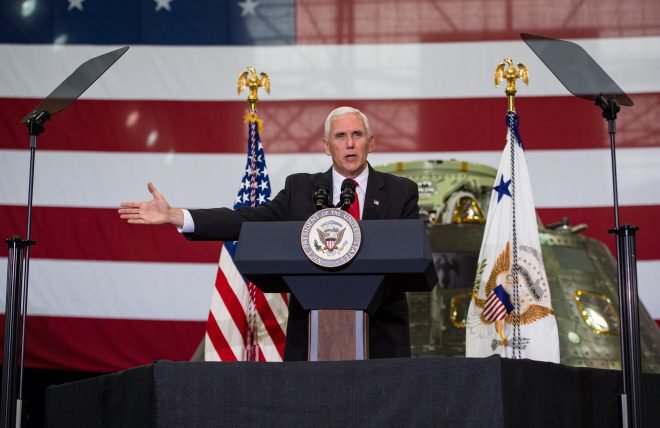 I was moved to weigh in after reading Vice President Mike Pence’s comments last week down at the Kennedy Space Center — a speech that seemed to minimize NASA’s performance in recent years (decades?) and to propose a return to a kind of Manifest Destiny way of thinking in space.

The speech did not appear to bode well for space science, which has dominated NASA news with many years of exploration into the history and working of the cosmos and solar system, the still little-understood domain of exoplanets, the search for life beyond Earth.

Instead, the speech was very much about human space exploration, with an emphasis on “boots on the ground,” national security, and setting up colonies.

“We will beat back any disadvantage that our lack of attention has placed and America will once again lead in space,” Pence said.“We will return our nation to the moon, we will go to Mars, and we will still go further to places that our children’s children can only imagine. We will maintain a constant presence in low-Earth orbit, and we’ll develop policies that will carry human space exploration across our solar system and ultimately into the vast expanses. As the president has said, ‘Space is,’ in his words, ‘the next great American frontier.’ And like the pioneers that came before us, we will settle that frontier with American leadership, American courage and American ingenuity.”

That a new president will have a different kind of vision for NASA than his predecessors is hardly surprising. NASA may play little or no role in a presidential election, but the agency is a kind of treasure trove of high profile possibilities for any incoming administration.

That the Trump administration wants to emphasize human space exploration is also no surprise. Other than flying up and back to construct and use the International Space Station, and then out to the Hubble Space Telescope for repairs, American astronauts have not been in space since the last Apollo mission in 1972. It should be said, however, that no other nation has sent astronauts beyond low Earth orbit, either, since then.

Where I found the speech off-base was to talk down the many extraordinary discoveries in recent decades about our planet, the solar system, the galaxy and beyond made during NASA missions and made possible by cutting-edge NASA technology and innovations.

In fact, many scientists, members of Congress and NASA followers would enthusiastically agree that the last few decades have been an absolute Golden Age in space discovery — all of it done without humans in space (except for those Hubble repairs.)

To argue for a more muscular human space program does not have to come with a diminishing of the enormous space science advances of these more recent years: missions and discoveries that brought to Americans and the world spectacular images and understandings of Mars, of Jupiter and Saturn and their potentially habitable moons, of Pluto, of hot Jupiters, super-Earths and exoplanet habitable zones, and of deep, deep space and time made more comprehensible because of NASA grand observatories.

To say that the United States has given up its “lead in space,” it seems to me, requires a worrisome dismissal of all this and much more.