Genome Sequence of a Marine Autotroph

Researchers have reported the genome sequence of a member of the class Zetaproteobacteria isolated from a pyrrhotite biofilm. 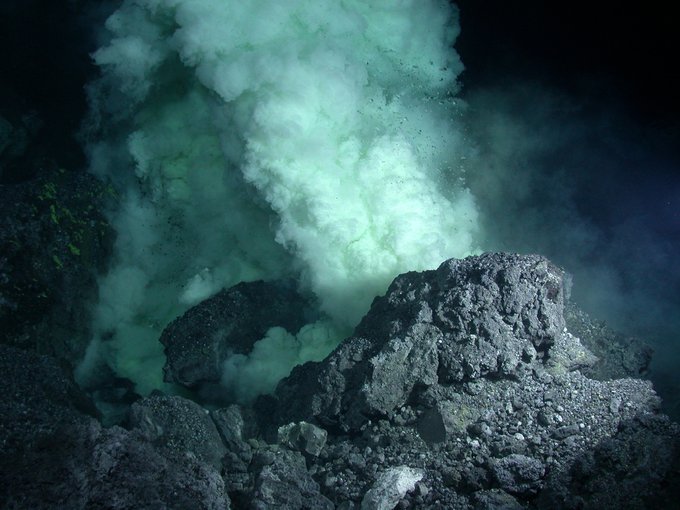 The first isolate of the class Zetaproteobacteria was isolated from iron-rich, deep-sea hydrothermal vents at the Loihi Seamount in Hawai'i. In this image, lava erupts onto the seafloor at the site NW Rota-1, creating a cloudy, extremely acidic plume.Image credit: WHOI.

A team of astrobiologists supported in part by the Exobiology Program and the NASA Astrobiology Institute (NAI) have reported the genome sequence of Mariprofundus sp. strain EBB-1, which was isolated from a biofilm incubated in seawater from East Boothbay, Maine, USA. This organism is a member of the class Zetaproteobacteria and gains energy through iron oxidation, forming iron oxide bio-minerals in the process.

The first isolate of Zetaproteobacteria came from hydrothermal vents at Loihi Seamount in Hawai’i, USA. Examples of this class of bacteria have now been found in other locations, including shallow marine environments along coastal areas. Studying organisms that are able to thrive near hydrothermal vents on the ocean floor can help astrobiologists understand the limits of habitability on Earth, and can provide clues about the mechanisms life as we know it might use to survive in extreme environments on other worlds in the Solar System. This information is important in guiding the search for life beyond Earth.

The study, “Genome Sequence of Mariprofundus sp. Strain EBB-1, a Novel Marine Autotroph Isolated from an Iron-Sulfur Mineral,” was published in the journal Microbiology Resource Announcements. The work was supported by NASA Astrobiology through the Exobiology Program and the NASA Astrobiology Institute (NAI). This newly-revealed science is a critical part of NASA’s work to understand the Universe, advance human exploration, and inspire the next generation. As NASA’s Artemis program moves forward with human exploration of the Moon, the search for life on other worlds remains a top priority for the agency.