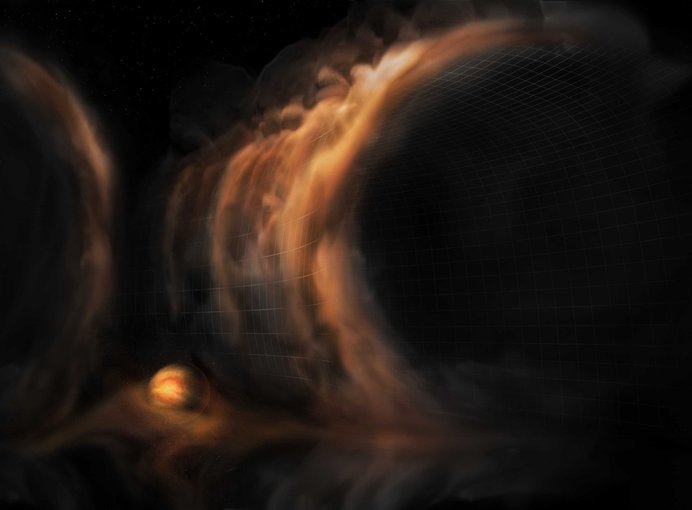 Artist impression of gas flowing like a waterfall into a protoplanetary disk gap, which is most likely caused by an infant planet.Image credit: NRAO/AUI/NSF, S. Dagnello.

A recent study supported in part by the NASA Astrobiology Program has used observations from the Atacama Large Millimeter/submillimeter Array (ALMA) to confirm theories about planetary formation that could have implications for habitability. The study focuses on the movement of gas in a protoplanetary disk, which is a collection of gas and dust around a host star. Although shaped like a plate, these disks can be very thick (thicker than the radius of a planet). Gas and dust eventually coalesce to form planets, which then move through the disk collecting more and more material. Through this process, a planet is able to clear a path through the disk.

The recent study shows that after a planet forms in the midplane of a protoplanetary disk, gas from outside the planet’s orbit can flow in to fill the gaps. This process creates ‘waterfall-like’ features in the disk called meridional flows. Importantly, this process results in gas that is rich in molecules being delivered to the atmospheres of the newly-formed planets. This could profoundly affect the chemical compositions of planetary atmospheres and, ultimately, planetary habitability.

The study, “ Meridional flows in the disk around a young star,” was published in the journal Nature. This work was supported by the Emerging Worlds Program. The NASA Astrobiology Program provides resources for Emerging Worlds and other Research and Analysis programs within the NASA Science Mission Directorate (SMD) that solicit proposals relevant to astrobiology research. This research is a critical part of NASA’s work to understand the Universe, advance human exploration, and inspire the next generation. As NASA’s Artemis program moves forward with human exploration of the Moon, the search for life on other worlds remains a top priority for the agency.