Candidate planet Proxima b orbits in the habitable zone around Proxima Centauri. 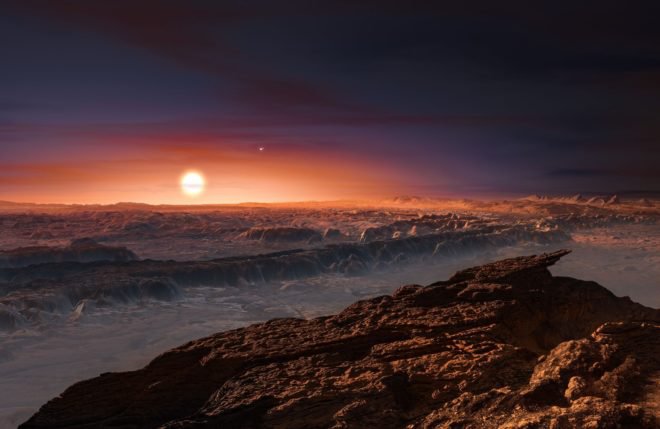 An artist impression of the surface of the candidate planet Proxima b orbiting the red dwarf star Proxima Centauri, the closest star to the Solar System. The double star Alpha Centauri AB also appears in the image. Proxima b is a little more massive than the Earth and orbits in the habitable zone around Proxima Centauri, where the temperature is suitable for liquid water to exist on its surface. (ESO/M. Kornmesser)

The long-sought and long-imagined planet is larger than Earth, but small enough to be rocky as opposed to a gas or ice giant. Making things even more exciting, the planet was detected inside the habitable zone of Proxima, suggesting that the planet could potentially have temperatures that allow for pooling liquid water.

But the very exciting news is that an exoplanet has almost definitively been found only 4 light-years from our solar system. There’s every reason to believe it will become the focus of intense and sustained scientific scrutiny.

The detection is the culmination of a “Pale Red Dot” observing campaign that began in earnest early this year to search the regions close to Proxima for exoplanets. Guillem Anglada-Escudé of Queen Mary University, London, was a leader of that campaign, as well as earlier efforts to dig deeper into decade-old Proxima Centauri data from other teams that hinted at a planet but were far from definitive.

“The signal that a planet orbits Proxima every 11 days is strong, so we have little doubt that it’s there,” Anglada-Escude said. “And because this is the closest possible planet outside our solar system, there’s a sense of finding something special, even inspirational.”

His hope is that the detection will become a global “driver,” a discovery that is significant enough to change how people think about our world, as well as about the possibility that some day humans will explore up close a planet outside our system.