About Image
Orion Molecular Cloud Complex, dominated in the center of this view by the brilliant Flame nebula (NGC 2024). The smaller, glowing cavity falling between the Flame nebula and the Horsehead is called NGC 2023.NASA/JPL-Caltech
May 14, 2018
Feature Story 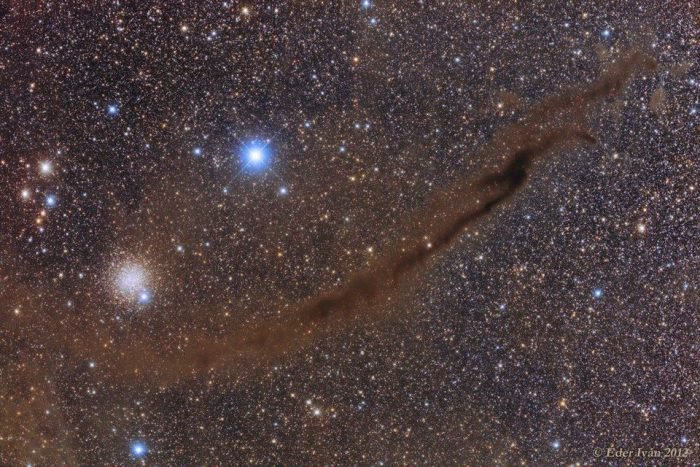 This snakelike gas cloud (center dark area) in the constellation Musca resembles a skinny filament. But it’s actually a flat sheet that extends about 20 light-years into space away from Earth, an analysis finds.Image credit: Ivan Eder, https://apod.nasa.gov/apod/ap130131.html.

When thinking and talking about “astrobiology,” many people are inclined to think of alien creatures that often look rather like us, but with some kind of switcheroo. Life, in this view, means something rather like us that just happens to live on another planet and perhaps uses different techniques to stay alive.

But as defined by NASA, and what “astrobiology” is in real scientific terms, is the search for life beyond Earth and the exploration of how life began here. They may seem like very different subjects but are actually joined at the hip; having a deeper understanding of how life originated on Earth is surely one of the most important set of clues to how to find it elsewhere.

Those con-joined scientific disciplines — the search for extraterrestrial life and the extraordinarily difficult task of analyzing how it started here — together raise another most complex challenge.

Precisely how far back do we look when trying to understand the origins of life? Do we look to Darwin’s “warm little pond?” To the Miller-Urey experiment’s conclusion that organic building blocks of life can be formed by sparking some common gases and water with electricity? To an understanding the nature and evolution of our atmosphere?

The answer is “yes” to all, as well as to scores of additional essential dynamics of our galaxies. Because to begin to answer those three questions, we also have to know how planets form, the chemical make-up of the cosmos, how different suns effect different exoplanets and so much more.

This is why I was so interested in reading about a breakthrough approach to understanding the shape and nature of interstellar clouds. Because it is when those clouds of gas and dust collapse under their own gravitational attraction that stars are formed — and, of course, none of the above questions have meaning without preexisting stars.

In theory, the scope of astrobiology could go back further than star-formation, but I take my lead from Mary Voytek, chief scientist for astrobiology at NASA. The logic of star formation is part of astrobiology, she says, but the innumerable cosmological developments going back to the Big Bang are not.

So by understanding something new about interstellar clouds — in this case determining the 3D structure of such a “cloud” — we are learning about some of the very earliest questions of astrobiology, the process that led over the eons to us and most likely life of some sort on the billions of exoplanets we now know are out there. 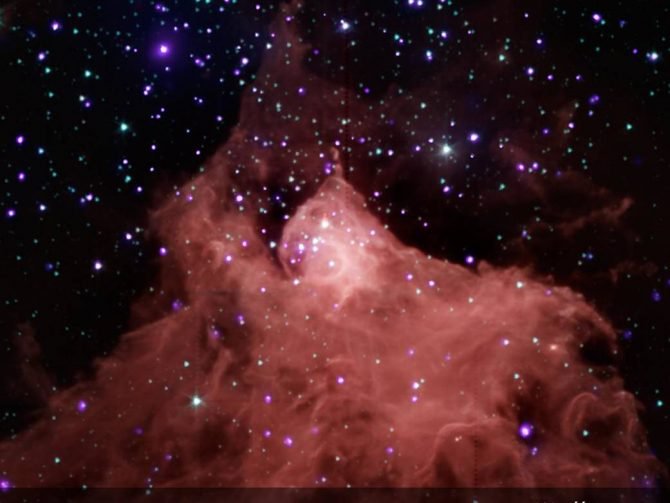 Cepheus B, a molecular cloud located in our Milky Galaxy about 2,400 light years from the Earth, provides an excellent model to determine how stars are formed. This composite image of Cepheus B combines data from the Chandra X-ray Observatory and the Spitzer Space Telescope.The Chandra observations allowed the astronomers to pick out young stars within and near Cepheus B, identified by their strong X-ray emission.Image credit: X-ray: NASA/CXC/PSU/K. Getman et al.; IRL NASA/JPL-Caltech/CfA/J. Wang et al..

So, what is an interstellar cloud?

It’s the generic name given to an accumulation of gas, plasma, and dust in our and other galaxies, left over from galaxy formation. So an interstellar cloud is a denser-than-average region of the interstellar medium.

Hydrogen is its primary component, and that hydrogen exists in a wide variety of states depending on the density, the age, the location and more of the cloud.

Until recently the rates of reactions in interstellar clouds were expected to be very slow, with minimal products being produced due to the low temperature and density of the clouds. However, organic molecules were observed in the spectra that scientists would not have expected to find under these conditions, such as formaldehyde, methanol, and vinyl alcohol.

The reactions needed to create such substances are familiar to scientists only at the much higher temperatures and pressures of earth and earth-based laboratories. The fact that they were found indicates that these chemical reactions in interstellar clouds take place faster than suspected, likely in gas-phase reactions unfamiliar to organic chemistry as observed on earth.

What was newly revealed this week is that it is possible to determine the 3D structure of an interstellar cloud. The advance not only reveals the true structure of the molecular cloud Musca, which differs from previous assumptions in looking more like a pancake than a needle.

But the two authors, astrophysicist Konstantinos Tassis of the University of Crete and Aris Tritsis, now a postdoctoral fellow at Australian National University, say their discovery will lead to a better understanding of the evolution of interstellar clouds in general. This, in turn, which will help astronomers answer the longstanding questions of how and why the enormous number and wild variety of stars exists in our galaxy and beyond.

Here is a video put together to help explain the science of Musca and its dimensions. The work was published in the journal Science, and here is their description of what the video shows:

“The first part of the movie gives an overview of the problem of viewing star-forming clouds in 2D projection. The second part of the video shows the striations in Musca, and the process through which the normal mode spatial frequencies are recovered. The third part of the movie demonstrates how the apparently complex profiles of the intensity cuts through striations are reproduced by progressively summing the theoretically predicted normal modes. At this part of the video (1:30-1:52) the spatial frequencies are scaled to the frequency range of human hearing and are represented by the musical crescendo.”

In an email, Tritsis said that this is the first time that the 3-dimensional coordinates of an interstellar cloud have been measured.

“There have been other crude estimates of the 3D sizes of clouds that relied on many assumptions so this is the first time we were able to determine the size with such accuracy and certainty,” he wrote.

“What we are after is the physics that controls the nature of the stars that will form. This physics will dictate how many star will form and with what masses, but it will also be responsible for shaping the cloud. Thus, this physics is encoded in the shape and that is why we are so interested about it.”

Their pathway in to mapping a 3D cloud was the striations (wispy stripe-like patterns) they detected within the cloud. They show that these striations form by the excitation of fast magnetosonic waves (longitudinal magnetic pressure waves) – the cloud is vibrating, like a bell ringing after it has been struck.

“What we have actually found is that the entire cloud oscillates just like waves on the surface of a pond,” he wrote in his email. 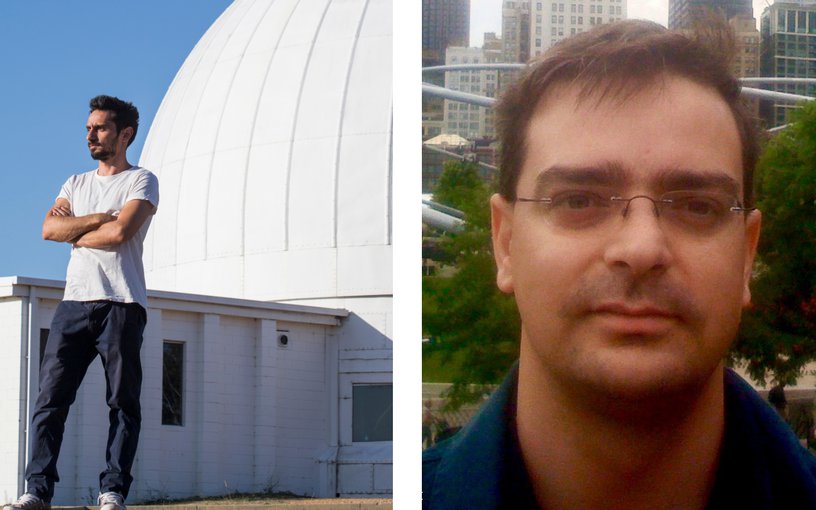 “However, in this instance is not the surface of the water that is oscillating but the magnetic field that is threading the cloud. Furthermore, because these waves get trapped, they act like a fingerprint. They are unique and by studying their frequencies we can deduce the sizes of the boundaries that confined them.

“It is the same concept as a violin and a cello making very different sounds. In a similar fashion, clouds with different shapes and sizes will vibrate differently. After having identify the frequencies of these oscillations we scaled them to the frequency range of human hearing to get the ‘song of Musca’!”

By analyzing the frequencies of these waves the authors produce a model of the cloud, showing that Musca is not a long, thin filament as once thought, but rather a vast sheet-like or pancake structure that stretches 20 light-years away from Earth. (The cloud is some 27 light 490 and 650 light-years from Earth.)

With the determination of its 3D nature, the scientists modeled a cloud that is ten times more spacious than earlier thought. 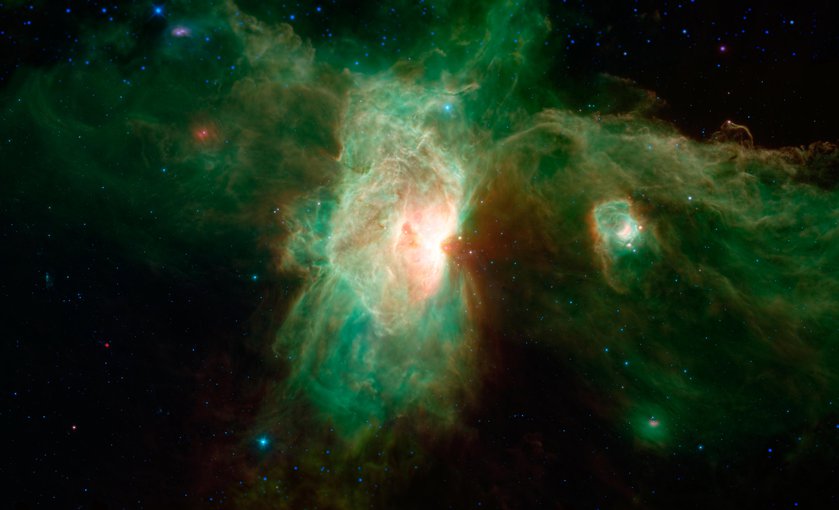 Orion Molecular Cloud Complex, dominated in the center of this view by the brilliant Flame nebula (NGC 2024). The smaller, glowing cavity falling between the Flame nebula and the Horsehead is called NGC 2023.Image credit: NASA/JPL-Caltech.

From the 3D reconstruction, the authors were able to determine the cloud’s density. Tritsis and Tassis note that, with its geometry now determined, Musca can be used to test theoretical models of interstellar clouds.

“Because of the fact that Musca is isolated and it is very ordered, it was the obvious choice for us to test our method,” Tritis wrote. “However, other clouds out there could also vibrate globally.

“Knowing the exact dimensions of Musca, we can simulate it in great detail, calculate many different properties of this particular cloud based on different star formation models, and compare them with observations.

“We believe that, with its 3D structure revealed, Musca will now act as a prototype laboratory to study star formation in greater detail than ever before. The Musca star formation saga is only now beginning, and this is a very exciting development that goes beyond this particular discovery.”

And in that way, the discovery is very much a part of the long and broad sweep of astrobiology.