Extraterrestrial Nucleobases in the Murchison Meteorite 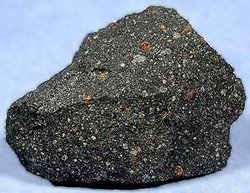 A recent study in Earth and Planetary Science Letters from NAI’s Teams at NASA Goddard Space Flight Center, Carnegie Institution of Washington, and University of Wisconsin, shows that nucleic acids of extraterrestrial origin are present in the Murchison meteorite. Carbon-rich meteorites such as the Murchison are thought to be responsible for delivering biologically-relevant organic material to the young Earth. These results demonstrate that the nucleic acids discovered in the meteorite, which are components of the genetic code in modern biochemistry, were already present in the early solar system and may have played a key role in life’s origin. Read more at ScienceNOW.