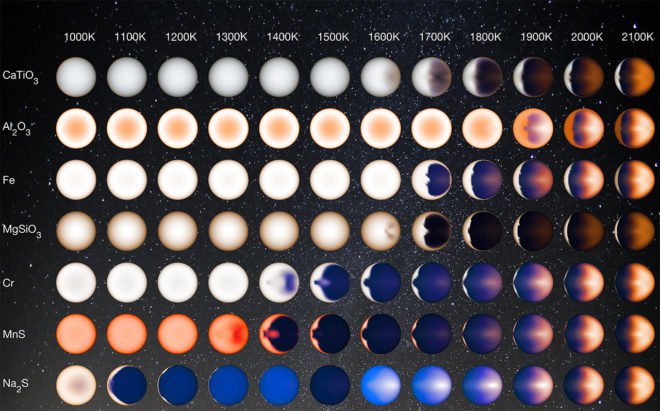 An illustration representing how hot Jupiters of different temperatures and different cloud compositions might appear to a person flying over the day side of these planets on a spaceship, based on computer modeling. (NASA/JPL-Caltech/University of Arizona/V. Parmentier)

Understanding the make-up and dynamics of atmospheric clouds is crucial to our interpretations of how weather and climate behave on Earth, and so it should come as no surprise that clouds are similarly essential to learning the nature and behavior of exoplanets.

On many exoplanets, thick clouds and related, though different, hazes have been impediments to learning what lies in the atmospheres and on surfaces below. Current technologies simply can’t pierce many of these coverings, and scientists have struggled to find new approaches to the problem.

One class of exoplanets that has been a focus of cloud studies has been, perhaps unexpectedly, hot Jupiters — those massive and initially most surprising gas balls that orbit very close to their suns.

Because of their size and locations, the first exoplanets detected were hot Jupiters. But later work by astronomers, and especially the Kepler Space Telescope, has established that they are not especially common in the cosmos.

Due to their locations close to suns, however, they have been useful targets of study as the exoplanet community moves from largely detecting new objects to trying to characterize them, to understanding their basic features. And clouds are a pathway to that characterization.

For some time now, scientists have understood that the night sides of the tidally-locked hot Jupiters generally do have clouds, as do the transition zones between day and night. But more recently, some clouds on the super-hot day sides — where temperatures can reach 2400 degrees Fahrenheit –have been identified as well.

Vivien Parmentier, a Sagan Fellow at the University of Arizona, Tucson, as well as planetary scientist Jonathan Fortney of the University of California at Santa Cruz and the Nexus for Exoplanet System Science (NExSS) have been studying those day side hot Jupiter clouds to see what they might be made of, and how and why they behave as they do.

“Cloud composition changes with planet temperature,” said Parmentier, who used a 3D General Circulation Model (GCM) to track where clouds form in hot Jupiter atmospheres, and what impact they have on the light emitted and reflected by the planets. “The offsetting light curves tell the tale of cloud composition. It’s super interesting, because cloud composition is very hard to get otherwise.”

The paper by Parmentier, Fortney and others was published in The Astrophysical Journal.

Solid observational evidence of clouds on the days sides of hot Jupiters has been collected for only a short time, and is done by measuring parent starlight being reflected off the atmosphere. Enough information has accumulated by now, Fortney said, to begin to offer theoretical explanations of the measurements being made.