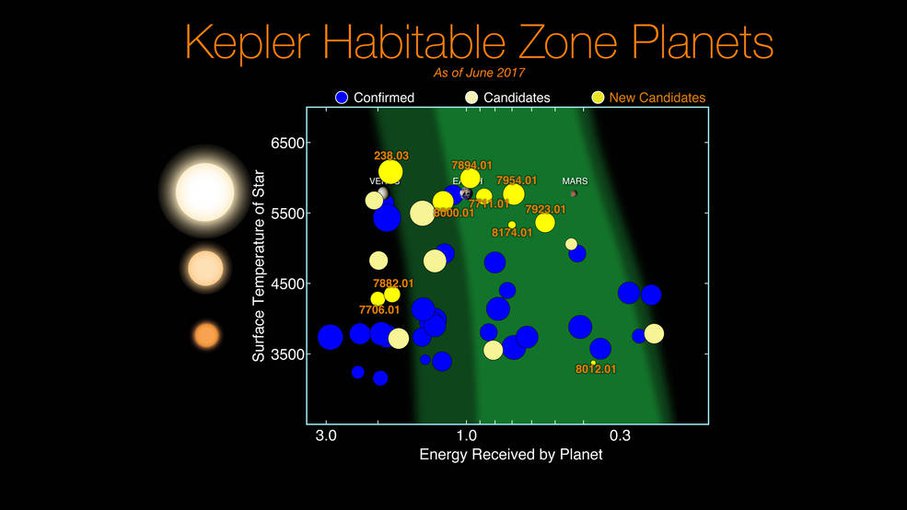 Planet candidates from the eighth Kepler planet candidate catalog show numerous terrestrial worlds that are near the size of Earth and within the habitable zone of their stars. The dark green span represents an optimistic estimate for habitable zone, while the brighter green a more conservative estimate. Blue circles are confirmed exoplanets, while yellow circles are new planet candidates that require follow-up observations.Image credit: NASA/Ames Research Center/Wendy Stenzel.

A recent study examines conditions in which oxygen (O2) or ozone (O3) can be produced through abiotic processes on habitable planets. Using future telescopes, scientists hope to examine the makeup of exoplanet atmospheres, and determine whether or not they could be attributed to biological activity. To do this, they will need to understand how atmospheric signatures could be ‘false positives’ for life. Models used to predict these ‘false positives’ are inconsistent, and the new study examines where some of these inconsistencies might arise. The researchers focus on how models for oxygen production treat atmospheric and global redox balance, and the treatment (or lack thereof) of lightning.

Understanding how detectable oxygen can appear in an exoplanet’s atmosphere without biology is essential in developing techniques for life detection on distant worlds. Ultimately, the researchers behind the new study suggest that molecular oxygen remains a useful biosignature for Earth-like terrestrial planets. Their work is a step toward identifying ‘false positives’ for life that could affect future observations of terrestrial planets beyond our solar system.

The study, “Abiotic O2 Levels on Planets around F, G, K, and M Stars: Effects of Lightning-produced Catalysts in Eliminating Oxygen False Positives,” was published in The Astrophysical Journal. The work was supported by the Nexus for Exoplanet System Science (NExSS) and NASA’s Habitable Worlds Program. NExSS is a NASA research coordination network supported in part by the NASA Astrobiology Program. This program element is shared between NASA’s Planetary Science Division (PSD) and the Astrophysics Division. The NASA Astrobiology Program also provides resources for Habitable Worlds and other Research and Analysis programs within the NASA Science Mission Directorate (SMD) that solicit proposals relevant to astrobiology research.