Earth during a Faint Young Sun 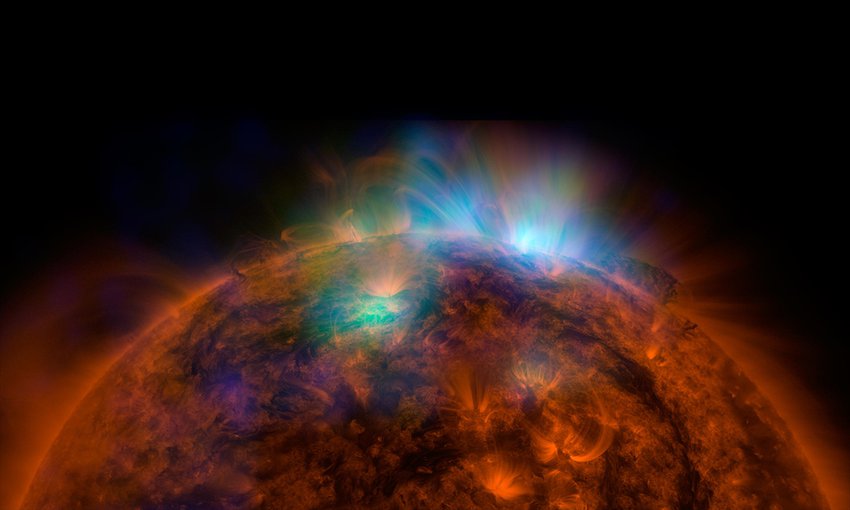 The Sun provides energy that is crucial for keeping the Earth warm enough for liquid water to persist. However, early in the history of the Solar System, output from the Sun was roughly 70% of what it is today.Image credit: NASA/JPL-Caltech/GSFC.

Research supported in part by the NASA Astrobiology Program provides new insight into the ‘faint young Sun problem.’ The ‘faint young Sun’ concept refers to a time during the first billion years of Earth’s history, when liquid water was present at the planet’s surface but output from the Sun was only seventy percent of what it is today. Scientists have long been trying to understand how the planet remained warm enough for liquid water when the Sun was providing significantly less energy to the Earth’s surface. The new study examines the potential role of the carbon-silicate cycle in stabilizing Earth’s early climate.

The team of researchers examined the weathering of cations from silicate, reactions that depend on the planet’s temperature. These cations sequester CO2 and ultimately allow for the formation of carbonates on the seafloor, a process that creates a stabilizing feedback for the planet’s climate.

Previous theories suggest that an increase in the atmospheric pressure of CO2 could have had a positive affect on this process, ultimately helping to stabilize the climate of the Earth’s surface during the ‘faint young Sun’ period. During this time in Earth’s history there were also frequent impact events, and the authors of the new study note that ejecta from impacts would have been easily weathered by carbonic acid. The paper reports estimates for the surface temperature and ocean pH during the Hadean and early Archean using a model that includes the weathering of impact ejecta, seafloor weathering, and ocean carbonate chemistry.

Understanding what the surface environment was like on the ancient Earth is relevant to studies on the origins of life on our planet. The results of the new work indicate that there were relatively low surface temperatures during the Hadean, and circumneutral to basic pH for seawater. The team believes that a cold and alkaline marine environment would have been associated with a high frequency of impact events. Therefore, if life originated during this time (the Hadean), it would have emerged on a cold Earth with alkaline oceans.

The study, “Probable Cold and Alkaline Surface Environment of the Hadean Earth Caused by Impact Ejecta Weathering,” was published in the journal Geochemistry, Geophysics, Geosystems. The work was supported by NASA Astrobiology through the Exobiology Program. This newly-revealed science is also a critical part of NASA’s work to understand the Universe, advance human exploration, and inspire the next generation. As NASA’s Artemis program moves forward with human exploration of the Moon, the search for life on other worlds remains a top priority for the agency.