About Image
Keck I open for buisness as the Hawaiian sun sets on the horrizon, filling the sky with a beautiful mix of blue, pink, and orange.Ethan Tweedie/W.M. Keck Observatory
Oct. 23, 2020
Program News

Dr. Andrea Ghez of the University of California Los Angeles (UCLA), has been named as one of three winners of the 2020 Nobel Prize in Physics.

Ghez was awarded the prestigious prize for her role in providing experimental evidence for a supermassive black hole that exists in the center of the Milky Way galaxy. While this work was not supported by the NASA Astrobiology Program, Ghez has also made important contributions to astrobiology in her career.

Ghez was an early researcher in exoplanet science, and studied methods for detecting potential habitable extrasolar planets as a Co-Investigator with one of the first teams at the NASA Astrobiology Institute (NAI). As part of the NAI team at UCLA, Ghez studied dust grain growth in the protoplanetary disk that encircles the low mass star GG Tau.

In the following years, Ghez’s work led into astrophysics and the study of the structure of galaxies. Using the W.M. Keck Observatory on Maunakea in Hawai’i, Ghez began collecting data that would prove the existence of the supermassive black hole at the very center of the Milky Way. 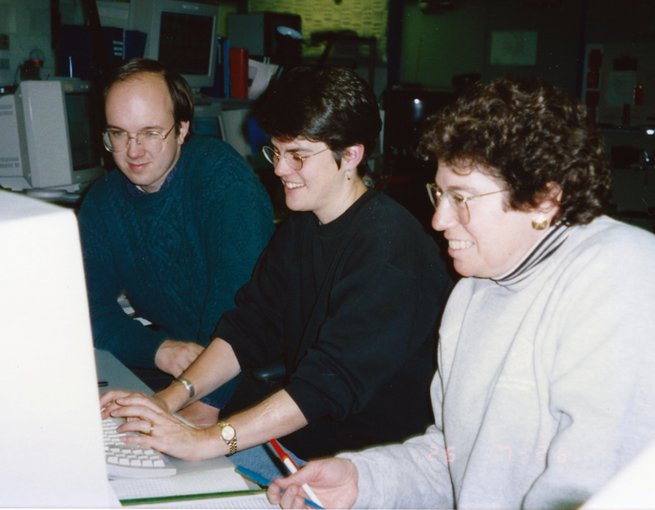 Bruce Macintosh, Andrea Ghez and Claire Max in the observatory room of the Keck telescope in 1996.Image credit: llnl.gov/.

A press release from The Nobel Prize concerning the award is available at: https://www.nobelprize.org/prizes/physics/2020/press-release/