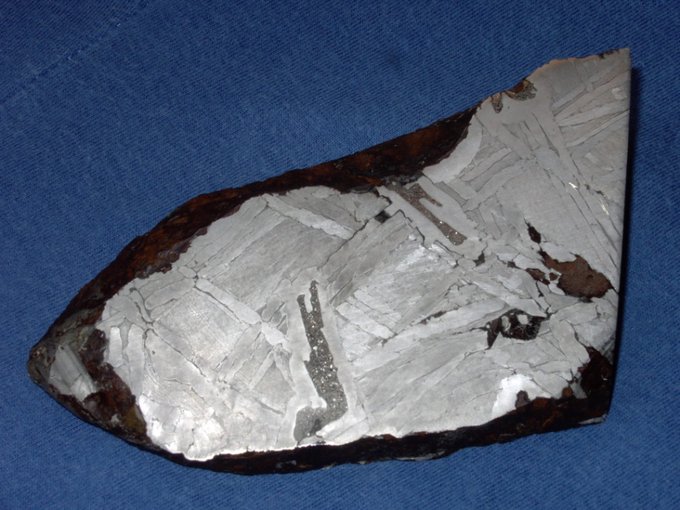 This 15cm wide fragment of the Seymchan meteorite found in Russia in 1967 is an iron-nickel pallasite. The long filament of dark grey material in the center is schreibersite.Image credit: University of South Florida.

Meteorites that crashed onto Earth billions of years ago may have provided the phosphorous essential to the biological systems of terrestrial life. The meteorites are believed to have contained a phosphorus-bearing mineral called schreibersite, and scientists have recently developed a synthetic version that reacts chemically with organic molecules, showing its potential as a nutrient for life.

Phosphorus is one of life’s most vital components, but often goes unheralded. It helps form the backbone of the long chains of nucleotides that create RNA and DNA; it is part of the phospholipids in cell membranes; and is a building block of the coenzyme used as an energy carrier in cells, adenosine triphosphate (ATP).

Yet the majority of phosphorus on Earth is found in the form of inert phosphates that are insoluble in water and are generally unable to react with organic molecules. This appears at odds with phosphorus’ ubiquity in biochemistry, so how did phosphorus end up being critical to life?

In 2004, Matthew Pasek, an astrobiologist and geochemist from the University of South Florida, developed the idea that schreibersite [(Fe, Ni)3P], which is found in a range of meteorites from chondrites to stony–iron pallasites, could be the original source of life’s phosphorus. Because the phosphorus within schreibersite is a phosphide, which is a compound containing a phosphorus ion bonded to a metal, it behaves in a more reactive fashion than the phosphate typically found on Earth.

Finding naturally-formed schreibersite to use in laboratory experiments can be time consuming when harvesting from newly-fallen meteorites and expensive when buying from private collectors. Instead, it has become easier to produce schreibersite synthetically for use in the laboratory.

Natural schreibersite is an alloy of iron, phosphorous and nickel, but the common form of synthetic schreibersite that has typically been used in experiments is made of just iron and phosphorus, and is easily obtainable as a natural byproduct of iron manufacturing. Previous experiments have indicated it reacts with organics to form chemical bonds with oxygen, the first step towards integrating phosphorous into biological systems.

However, since natural schreibersite also incorporates nickel, some scientific criticism has pointed out that the nickel could potentially alter the chemistry of the mineral, rendering it non-reactive despite the presence phosphides. If this were the case it would mean that the experiments with the iron–phosphorous synthetic schreibersite would not represent the behavior of the mineral in nature.

Since the natural version incorporates nickel, there has always been the worry that the synthetic version is not representative of how schreibersite actually reacts and that the nickel might somehow hamper those chemical reactions.

“There was always this criticism that if we did include nickel it might not react as much,” says Pasek.

Pasek and his colleagues have addressed this criticism by developing a synthetic form of schreibersite that includes nickel.

In a recent paper published in the journal Physical Chemistry Chemical Physics, Pasek and lead author and geochemist Nikita La Cruz of the University of Michigan show how a form of synthetic schreibersite that includes nickel reacts when exposed to water. The work was supported by the Exobiology and Evolutionary Biology element of the NASA Astrobiology Program. As the water evaporates, it creates phosphorus–oxygen (P–O) bonds on the surface of the schreibersite, making the phosphorus bioavailable to life. The findings seem to remove any doubts as to whether meteoritic schreibersite could stimulate organic reactions.

“Biological systems have a phosphorus atom surrounded by four oxygen atoms, so the first step is to put one oxygen atom and one phosphorous atom together in a single P–O bond,” Pasek explains.

Terry Kee, a geochemist at the University of Leeds and president of the Astrobiology Society of Britain, has conducted his own extensive work with schreibersite and, along with Pasek, is one of the original champions of the idea that it could be the source of life’s phosphorus.

“The bottom line of what [La Cruz and Pasek] have done is that it appears that this form of nickel-flavored synthetic schreibersite reacts pretty much the same as the previous synthetic form of schreibersite,” he says.

This puts to rest any criticism that previous experiments lacked nickel. 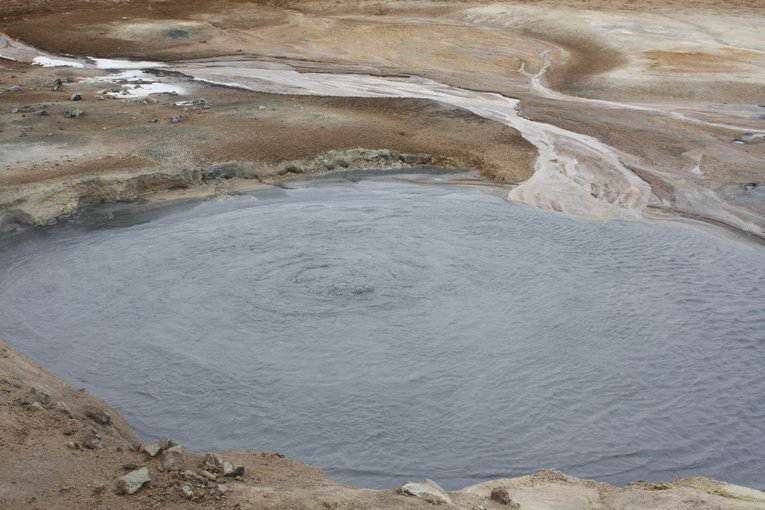 A bubbling hydrothermal pool in the Mývatn area of Iceland. Could such pools have pro-moted P–O bonds on the surfaces of schreibersite meteorites that had fallen into the pools?Image credit: Keith Cooper.

Pasek describes how meteors would have fallen into shallow pools of water on ancient Earth. The pools would then have undergone cycles of evaporation and rehydration, a crucial process for chemical reactions to take place. As the surface of the schreibersite dries, it allows molecules to join into longer chains. Then, when the water returns, these chains become mobile, bumping into other chains. When the pool dries out again, the chains bond and build ever larger structures.

“The reactions need to lose water in some way in order to build the molecules that make up life,” says Pasek. “If you have a long enough system with enough complex organics then, hypothetically, you could build longer and longer polymers to make bigger pieces of RNA. The idea is that at some point you might have enough RNA to begin to catalyze other reactions, starting a chain reaction that builds up to some sort of primitive biochemistry, but there’s still a lot of steps we don’t understand.”

Demonstrating that nickel-flavored schreibersite, of the sort contained in meteorites, can produce phosphorus-based chemistry is exciting. However, Kee says further evidence is needed to show that the raw materials of life on Earth came from space.

“I wouldn’t necessarily say that the meteoric origin of phosphorus is the strongest idea,” he says. “Although it’s certainly one of the more pre-biotically plausible routes.”

Despite having co-developed much of the theory behind schreibersite with Pasek, Kee points out that hydrothermal vents could rival the meteoritic model. Deep sea volcanic vents are already known to produce iron-nickel alloys such as awaruite and Kee says that the search is now on for the existence of awaruite’s phosphide equivalent in the vents: schreibersite.

“If it could be shown that schreibersite can be produced in the conditions found in vents — and I think those conditions are highly conducive to forming schreibersite — then you’ve got the potential for a lot of interesting phosphorylation chemistry to take place,” says Kee.

Pasek agrees that hydrothermal vents could prove a good environment to promote phosphorus chemistry with the heat driving off the water to allow the P–O bonds to form. “Essentially it’s this driving off of water that you’ve got to look for,” he adds.

Pasek and Kee both agree that it is possible that both mechanisms — the meteorites in the shallow pools and the deep sea hydrothermal vents — could have been at work during the same time period and provided phosphorus for life on the young Earth.

Meanwhile David Deamer, a biologist from the University of California, Santa Cruz, has gone one step further by merging the two models, describing schreibersite reacting in hydrothermal fields of bubbling shallow pools in volcanic locations similar to those found today in locations such as Iceland or Yellowstone.

Certainly, La Cruz and Pasek’s results indicate that schreibersite becomes more reactive the warmer the environment in which it exists.

“Although we see the reaction occurring at room temperature, if you increase the temperature to 60 or 80 degree Celsius, you get increased reactivity,” says Pasek. “So, hypothetically, if you have a warmer Earth you should get more reactivity.”

One twist to the tale is the possibility that phosphorus could have bonded with oxygen in space, beginning the construction of life’s molecules before ever reaching Earth. Schreibersite-rich grains coated in ice and then heated by shocks in planet-forming disks of gas and dust could potentially have provided conditions suitable for simple biochemistry. While Pasek agrees in principle, he says he has “a hard time seeing bigger things like RNA or DNA forming in space without fluid to promote them.”