New studies help astrobiologists broaden understanding of the evolutionary history of ribosomes, a key molecule in the origin and evolution of life.

In two recent studies, astrobiologists at the University of Houston supported by the NASA Astrobiology Program have provided new insights into the structural evolution of ribosomes. Included in the work is a description of new methodology for examining samples with high concentrations of salt using cryo-electron microscopy. This new method has allowed researchers to gather information about the three-dimensional structure of an archaea ribosome.

Ribosomes are large molecules that are universal to life as we know it and, in biology, these molecular machines synthesize proteins. Information from DNA is sent to the ribosome using messenger RNA (mRNA). Ribosomes read this information and use it as a blueprint to string together amino acids into long polypeptide chains and, ultimately, proteins.

Ribosomes are found in all domains of life and all ribosomes, across the myriad types of organisms found on Earth, share structural similarities. Namely, the ‘central core’ of every ribosome is the same in all living cells, and this core is what houses the machinery to catalyze the peptide bonds when building polypeptide chains. Beyond this central core, different organisms have unique additions or deletions of ribosomal segments. 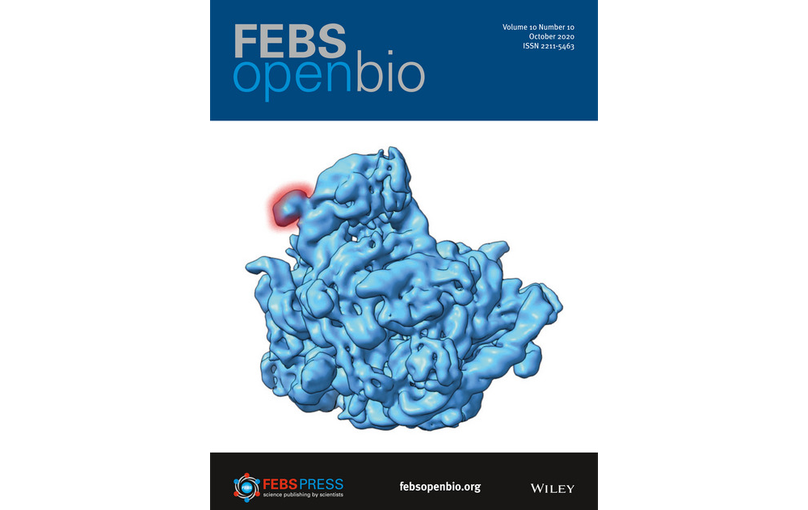 The first study focuses on the ribosome of a specific microorganism known as Halococcus morrhuae. This extremophile archaeon lives in environments with high concentrations of salt.

The team determined the structure of the large subunit of the H. morrhuae ribosome using a powerful technique known as cryo-electron microscopy. This structure showed that the ribosome of H. morrhuae contains a large expansion, or insert, in its 5S ribosomal RNA (rRNA). This insert was actually first reported in 1981 as sequence data, but the new study finally provides a structure to validate the discovery. (1)

5S rRNA is an RNA molecule that is a functional subunit of the larger ribosome, and it is used in cells from all domains of life. Like all RNA, it is composed of a long string of base pairs (known as nucleotides). The 5S rRNA of H. morrhuae was expanded by 108 nucleotides, which is nearly double the size of a typical 5S rRNA (120 base pairs long).

In eukaryotes, which have large rRNA, such expansion sequences are not unusual. In Archaea, however, an expansion as large as this is rare.

“Although insertion or expansion sequences of varying size are frequently seen in the large rRNAs of eukaryotes, similar large insertions have typically not been described in Archaea. Exceptions occur in the Asgard archaea,” explains Madhan Tirumalai of the University of Houston.

Large expansions in the ribosomal RNA of Asgard archaea were recently reported by researchers at the NASA Astrobiology-supported Center for the Origin of Life at the Georgia Institute of Technology (2).

Tirumalai continues, “In bacteria, there has been at least one notable instance wherein an insertion known as the ‘steeple’ (causing a small‐subunit‐dependent conformational change) has been described in Mycobacterium smegmatis.” (3) 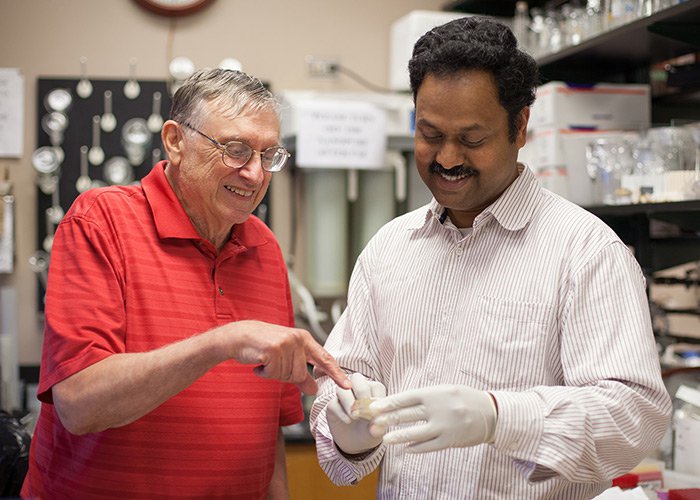 “High amounts of salt in cell suspensions severely interfere with the contrast between structures of molecules (proteins, RNA, DNA) or cells and the surrounding medium in cryo-electron microscopy,” explains Tirumalai.

When salt concentrations are high in a sample (close to the saturation limit), salt can quickly crystallize. This influences the quality of the sample solution that is placed on the grids used for cryo-electron microscopy, and creates challenges in both sample preparation and imaging.

In order to overcome such challenges, the research team used a larger dataset of ribosome particles in samples, moving from an initial 15,000 particles to over 100,000 particles.

“More ribosomes requires more cells,” says Tirumalai, “hence we grew a larger number of cells. This increased dataset was sought to improve magnification and resolution of the results. To complement this, an on-grid washing procedure was applied on the samples by collaborators at the Baylor College of Medicine’s National Center for Macromolecular Imaging, following which the samples were immediately imaged.”

The actual structure of the ribosomal insertion itself in H. morrhuae also presented some challenges for cryo-electron microscopy, and additional microscopy and data processing methods were used to bolster findings about the ribosome’s three-dimensional structure. The data suggest that there is a ‘bulge’ in the ribosome and, according to the paper, the insertion might actually “wave like a flag in the wind.” This observed flexibility of the insertion could be related to its function, or the flexibility could be an indicator of the timepoint in evolutionary history that the insertion became incorporated into the H. morrhuae ribosome.

“The conformational landscape and the evolutionary history of the inserted region within the Halococcus 5S rRNA certainly warrants future study,” according to Tirumalai.

For eukaryotes, large expansions in rRNA do not typically affect the overall structure of the molecule, and ribosomes with large expansions are still able to perform their work inside cells. Because large expansions are rare in archaea, acquiring the three-dimensional structure of the H. morrhuae ribosome provides insights into how large insertions might affect ribosomes in microorganisms. With so many extra nucleotides crammed into the archaeal 5S rRNA of H. morrhuae, the team was interested in whether or not the added bulk changed the ribosome’s structure and function.

Using cyro-electron microscopy alongside other methods, the researchers collected data to reconstruct the ribosomal subunit at the subnanometer scale. Interestingly, although the subunit has almost twice as much material that most other 5S rRNA, it is inserted into the ribosome in such a way that the original ‘canonical’ structure of 5S rRNA is still intact. So, although the ribosome is bigger, part of it (the functional part) still looks like typical 5S rRNA. The extra, inserted nucleotides are organized in such a way that they are flexible, and they are not packed tightly against the functional part of the RNA subunit, meaning that they don’t ‘get in the way’ of the ribosome’s work.

The study, “Cryo‐electron microscopy visualization of a large insertion in the 5S ribosomal RNA of the extremely halophilic archaeon Halococcus morrhuae,” was selected as the cover article for the journal FEBS Open Bio.

Additional ribosomal work from members of the research group was also recently published in a special edition of the journal Life. In this study, Dr. Mario Rivas and Dr. George E. Fox dove into the structure at the center of the modern ribosome in order to uncover clues about the events that led to the formation of the first ribosome on Earth. What the team revealed was that the common ‘core’ of ribosomes used by life as we know it could have been formed by the combination of two pieces of RNA.

The study provides insight into the how these two halves of the ribosome core interact, as well as their evolutionary history. The findings reveal a site on the molecule where magnesium ions could have helped the two original RNA pieces combine into a single unit. Understanding how the subunits of ribosomes were constructed in life’s evolution is important in determining what the original, oldest ribosome might have looked like in the first living cells on Earth.

The study, “Further Characterization of the Pseudo-Symmetrical Ribosomal Region,” was published in a special edition of the journal Life, “ The Origin and Early Evolution of Life: Prebiotic Systems Chemistry Perspective.”

The work was supported by NASA Astrobiology through the Exobiology Program and the Center for the Origin of Life (COOL) at Georgia Tech. Work was conducted at the University of Houston and supported in part with a subcontract from COOL to Dr. George E. Fox. The COOL Center is a part of NASA’s Prebiotic Chemistry and Early Earth Environments (PCE3) Consortium, a Research Coordination Network within the Astrobiology Program. The PCE3 Consortium is focused on investigating the delivery and synthesis of small molecules under the conditions of the Early Earth, and the subsequent formation of proto-biological molecules and pathways that lead to systems harboring the potential for life. Additional support came from the NASA Astrobiology Postdoctoral Program in the form of a NPP Fellowship to Dr. Rivas. For more information about becoming a NASA Astrobiology Postdoctoral fellow, visit: astrobiology.nasa.gov/nasa-astrobiology-postdoctoral-program/