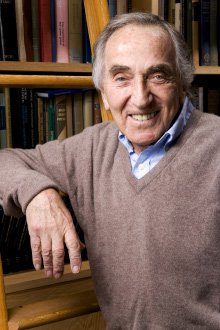 In 1964 Leslie Orgel joined The Salk Institute for Biological Studies in La Jolla as a Senior Fellow. Prior to that time he was Assistant Director of Research in Theoretical Chemistry at Cambridge University, where he developed ligand-field theory as a means to understand the properties of transition metal complexes. Based on that work he was elected a Fellow of The Royal Society at the unusually young age of 35. In 1990, one year after becoming a U.S. citizen, he was elected to the U.S. National Academy of Sciences.

At the Salk Institute, Orgel became interested in what distinguishes living systems from non-living things, and how a self-replicating molecule first arose that could pass on life’s genetic blueprint to future generations. He was especially intrigued by RNA, which has the capacity both to store genetic information and to form complex structures. Orgel was among the first scientists, together with his friend and Salk colleague Francis Crick and the microbiologist Carl Woese, to suggest that RNA, rather than DNA, was that first genetic molecule. Writing in the Journal of Molecular Biology in 1968, Orgel further suggested that “precisely defined structures of great complexity can be built using only the standard nucleotides”. Fifteen years later, following the discovery of RNA enzymes (ribozymes), this notion came to be known as the “RNA world”.

As the RNA world hypothesis gained broad acceptance, Orgel expressed new doubts. Attempts to form RNA under laboratory conditions that mimic the primitive Earth had been only marginally successful, and the complexity of RNA suggested to him that perhaps RNA was preceded by an even simpler genetic molecule. Accordingly, he and his coworkers at Salk studied alternative genetic backbones that may have set the stage for RNA. They also studied many other aspects of the origins of life on Earth, including the prebiotic synthesis of the building-blocks of RNA, the joining together of those building blocks to form polymers, and the non-enzymatic copying of RNA.

Orgel’s work on the origins of life also had practical applications. During his studies of RNA analogues, he devised a straightforward way to synthesize cytosine arabinoside (Ara C), a compound that is one of today’s most commonly used anti-cancer agents. He also devised methods for cross-linking proteins and nucleic acids, which have had applications in clinical diagnostics. Orgel even dabbled in methods for concentrating wine so that it could be transported more easily, although the fruits of those experiments never left the laboratory.

Orgel is fondly remembered by his scientific colleagues for his extraordinary intellect, quick wit, and kind manner. He played a central role in establishing the intellectual foundation for the experimental study of the origins of life and for inspiring everyone around him to strive for excellence in their endeavors.