Home

News

Can the Magnetic Field of ...

About Image
Full-frame NAVCAM image taken on 9 August 2014 from a distance of about 99 km from comet 67P/Churyumov-Gerasimenko. Credit: ESA/Rosetta/NAVCAMESA/Rosetta/NAVCAM
June 17, 2019
Research Highlight

Can the Magnetic Field of Rosetta’s Comet Tell Us How the Outer Solar System Formed?

The European Space Agency’s Rosetta mission, which was the first mission to involve a spacecraft following a comet on its journey around the Sun, and placing a lander on its surface, has found clues about how magnetic fields may have helped the Solar System to form.

The Rosetta orbiter, along with its lander, Philae, measured the magnetic field of the comet 67P/ Churyumov-Gerasimenko. Scientists from the Department of Earth, Atmospheric and Planetary Sciences at the Massachusetts Institute of Technology, USA, and the Technische Universität Braunschweig, Germany, studied the Rosetta data and found that the comet has a weak magnetic field. John Biersteker, a planetary science PhD candidate at MIT and lead author of the research, says that, “Our work is consistent with theories of magnetically driven evolution of protoplanetary disks, the first time this has been tested in the outer solar system.” The study was published in The Astrophysical Journal.

“The magnetic field in our protoplanetary disk is thought to have played a key role in accreting gas and dust onto the young Sun,” explains James Bryson, who is a planetary scientist in the Department of Earth Sciences at the University of Cambridge and who was not involved in the Biersteker study. “This field effectively acts like a spring that allows different parcels of gas in the disk to communicate with each other efficiently. If a parcel of gas next to the Sun is accreted onto the Sun, the disk field effectively pulls on a neighboring parcel, which means gas is accreted onto the Sun at a higher rate than if the disk field didn’t exist. This field can therefore explain the rate at which we observe the accretion of gas onto other Sun-like stars.”

Adds Biersteker, “We are interested in magnetic records from the first several million years of the Solar System because magnetic fields have been proposed to play an important role in the evolution of protoplanetary disks, including the one that formed the Solar System.” 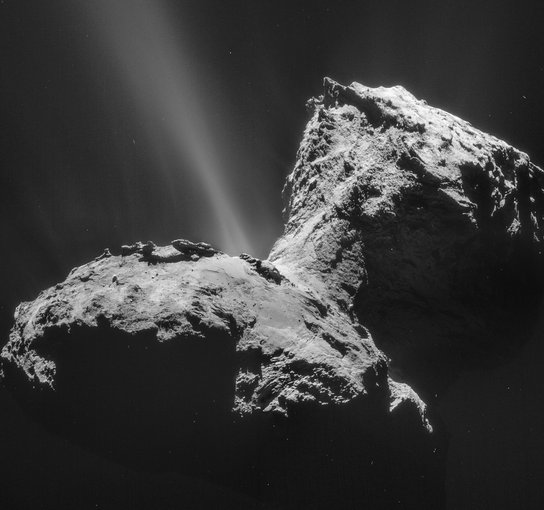 The two lobes of comet 67P, and the ‘neck’ joining them.Image credit: ESA/Rosetta/NAVCAM.

About 4.6 billion years ago, the Solar System began to form as a swirling cloud of gas and dust, but then collapsed inward while flattening to create a rotating disk. Smaller particles within the disk clumped together to create larger bodies, which eventually formed the planets, moons, asteroids, comets and meteoroids. Studies of meteorites tell us that some of the dust in that early, swirling cloud may have consisted of iron and other magnetic particles. Scientists are asking if those particles experienced magnetic fields within the protoplanetary disk, and if so, whether these fields helped align the particles as they clumped together. However, studies of the magnetism in meteorites have been mainly limited to giving us information about only the inner Solar System.

Observations of comets like 67P can tell us more about how the outer Solar System formed. Like some of the other comets, 67P is thought to have come from the Kuiper Belt, outside the orbit of Neptune. Later, 67P traveled closer to Jupiter, whose gravity then pulled 67P into a 6.5-year-long orbit, closer to the Sun.

Because comets are small and formed far away from the Sun, they are thought to have changed very little since they were assembled. Comets are made of frozen water and carbon dioxide, along with dust and some organic materials. Astronomers think that they were left over from the materials that formed the infant Solar System, after the primordial gas and dust cloud collapsed and the planets, moons and asteroids formed.

According to data from the Rosetta mission, studies of 67P’s water and gases show that the comet probably formed in a very cold region, far from the Sun. 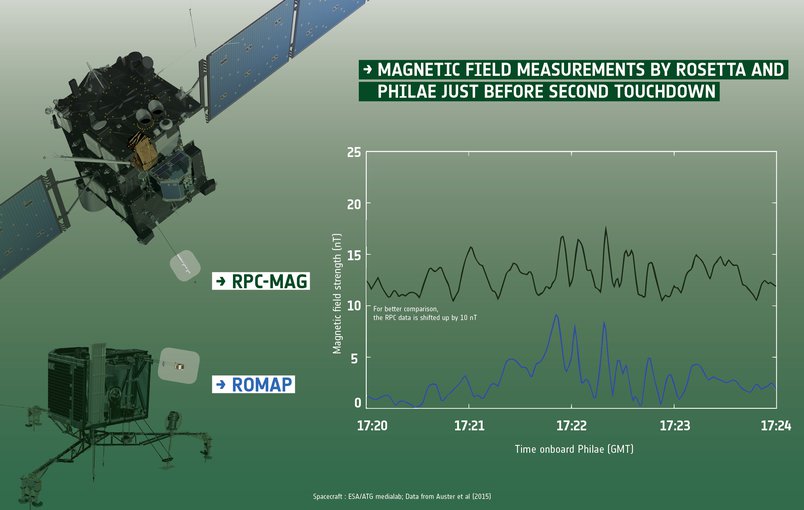 To measure 67P’s magnetic field, Rosetta’s orbiter carried a magnetometer (Plasma Consortium Magnetometer, or RPC-MAG), and Philae, the lander, carried the Rosetta Lander Magnetometer and Plasma Monitor (ROMAP). When Philae attempted to land on 67P in November 2014, it bounced off the surface twice before coming to rest. However, as Philae bounced, ROMAP took several measurements of the comet’s magnetic field, both on its surface and just above, while RPC-MAG measured the magnetic field further away, at an altitude of about 17 kilometers above the surface.

Hans-Ulrich Auster and Philip Heinisch, scientists at the Institute for Geophysics and Extraterrestrial Physics at the Universität Braunschweig in Braunschweig, Germany, studied the ROMAP and RPC-MAG data along with the early Philae trajectory data and found that the comet had a very weak magnetic field. Later, the team used the OSIRIS (Optical, Spectroscopic, and Infrared Remote Imaging System) instrument on the orbiter to obtain high resolution images of the comet with which they could simulate 67P’s precise shape, so that they could better estimate the maximum strength of the comet’s magnetic field.

“The reason for the approximations in [Auster and Heinisch’s] studies is that Philae’s landing did not go as planned, and the lander was initially lost!” says Biersteker. “Philae bounced across the surface of the comet instead of coming to rest at its intended landing spot.” However, as he explains further, “As it turned out, this was very fortunate for us, because it allowed the magnetometer to collect data over a large region of the comet instead of only at one location. But it meant that only after carefully reconstructing Philae’s trajectory could we combine the magnetic data with our knowledge of the comet’s shape. The upper limits on the strength of the magnetic field are compatible with theories where magnetic fields play an important role in controlling the evolution of the disk which formed the solar system. These are consistent with the required magnetic field strength from theoretical models of disk evolution.”

Biersteker concludes, “Our research comes at an exciting time for this field. Magnetic measurement techniques for meteorites are improving and new meteorites are always being examined, so that we may be able to start to piece together the large scale magnetic structure of the disk that formed the Solar System, both as a function of distance from the nascent Sun and possibly as a function of time.” He adds that “Astronomical measurements by instruments like ALMA, the Atacama Large Millimeter/submillimeter Array, are finally reaching the precision and resolution where we may be able to observe these magnetic fields in other planetary systems as they form.”

The work was supported through NASA’s Emerging Worlds Program. NASA Astrobiology provides resources for this and other Research and Analysis programs within the NASA Science Mission Directorate (SMD) that solicit proposals relevant to astrobiology research. It was also funded by the U.S. Rosetta program (CREI 1576768), and philanthropist Thomas F. Peterson Jr.